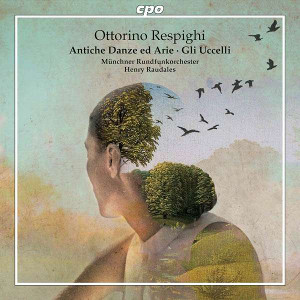 The Munich Radio Orchestra now turns to the sensuous fascination offered by Ottorino Respighi’s masterpieces – a logical and natural choice for this orchestra, which during the course of its history of more than sixty years has developed into an ensemble with an enormously broad artistic spectrum and earned a firm place in the orchestral landscape precisely because of its versatility. For Respighi familiarity with music history and the old masters was not only a sublime pastime but also a source of inspiration for his own compositional work, and he certainly also contributed a great deal to the now current concert practice involving the performance of early music with modern orchestras.

His Antiche danze ed arie, free arrangements of arias and dances from the sixteenth and seventeenth centuries, enables us to rediscover forgotten rhythms and tones. While he alters the character of the music by introducing a rich array of instruments, all sorts of different orchestrations, and harmonic modulations of modern coloration, the art of the old masters remains untouched. These works are finely complemented by his Gli Uccelli (The Birds) suite. In 1927 he drew on various harpsichord and lute miniatures for this quasi-ornithological »Suite for Small Orchestra,« producing picturesque snapshots here showing him from his admirable and remarkable side as a sensitive observer who discovers the pictorial element in all that he sees.

Henry Raudales, the conductor on this new disc of Respighi's three suites of 'Ancient Airs and Dances' is best known as an exceptionally fine violin soloist, but since 2001 he has been the Concertmaster of the Munich Radio Orchestra which he here directs in vivid performances of Respighi's delightful homage to the music of often long forgotten Italian and French composers from the 16th, 17th and early 18th centuries.

For much of his life Respighi had a keen interest in the Renaissance and Baroque music of his homeland and he edited for publication many works by, among others, Monteverdi and Frescobaldi at a time when their music was not well known. His discovery of collections of lute and keyboard pieces made by the Italian musicologist Oscar Chilesotti inspired the composition of the three suites of 'Antiche Danze ed Arie' or as they are usually called 'Ancient Airs and Dances' heard here. As one might expect from this master of orchestration these arrangements are full of ear-tickling sonorities and piquant orchestral colour that, though sounding undeniably sumptuous and romantically expressive, retain the charm and spirit of the original pieces.

This is only the second recording of these suites to appear on multichannel SACD so it is particularly welcome. Those who know and enjoy these engaging compositions will probably be familiar with the first stereo recording of them from Antal Dorati and the Philharmonia Hungarica Respighi: Ancient Airs and Dances - Dorati , a Mercury Living Presence recording made some 57 years ago still available on SACD – if you can find it at a sensible price – and sounding pretty remarkable for its age. Stereo only listeners will also find the 1979 recording by Seiji Ozawa and the Boston Symphony Orchestra Respighi: Antiche Danze ed Arie Per Liuto - Ozawa also to be very recommendable.

Perhaps the one unusual feature of this superbly recorded new version is that Raudales has brought some elements of current period practice to bear in his accounts of these suites (especially the third for strings only). Tempi, as one might expect, are very lively with crisp articulation, but the minimal string vibrato and occasionally choppy phrasing Raudales elicits from his players may for some listeners be considered unnecessary and perhaps a step too far in the interpretations of arrangements written between 1917 and 1932. That said, Raudales performances do bring an undeniable exuberance and bracing freshness to these enchanting pieces.

The companion work on this disc is Respighi's popular suite 'Gli Uccelli' ( The Birds) and somewhat surprisingly the only other version of it available in multi-channel SACD is also to be found on the CPO label, though differently coupled Respighi: La Boutique Fantasque - Conti. There is no doubt that both in terms of performance and recorded sound this new one is superior. The playing here has more verve and character than that from Marzio Conti and his Palermo Orchestra and the sound is more spacious.

The CPO multi-channel recording, a co-production with Bayerischer Rundfunk made in their Munich Studio 1, is gorgeous – clean, transparent and possessing a pleasing ambience that enhances the playing of the many fine soloists in the Munich Radio Orchestra. This is an excellent addition to the catalogue of Respighi's music on SACD and those seeking especially characterful accounts of these works in the finest modern sound need look no further.