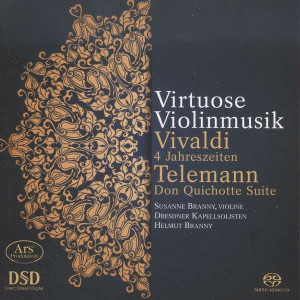 Under the reign of Friedrich August I (1670-1733), the Elector of Saxony (known as "August the Strong"), the court's music was richly developed by his policy of inviting great musicians from all over Europe to live, compose and perform in Dresden, for which they were paid handsomely. August formed a brilliant instrumental ensemble called the Cappella Polacca, unique at the time, as its members were only required to play one instrument.

Echoing August's Cappella Polacca, modern-day Dresdner Kapellsolisten is also a chamber orchestra of soloists. Using modern instruments, they study and apply historical playing practise for Baroque, Classical and even Romantic eras. Baroque is their speciality. For this programme of Vivaldi and Telemann, the disc booklet lists personnel for this programme as strings 6-4-5-2-2. Helmut Branny, director, was trained as a double bass player and has specialised in chamber music. He was a member of Sächsische Staatskapelle, founding Dresdner Kapellsolisten in 1994 and Capella Musica Dresden in 1995. Susanne Branny, born and trained in Dresden, is a highly accomplished and praised Baroque violinist; she is concertmaster and soloist for Kapellsolisten.

Vivaldi's 'Four Seasons' is doubtless one of the most popular of classical pieces, with fifty or more recordings available at any given time. This early Baroque set of violin concertos has been played by large modern concert orchestras (Abbado with LSO and Gidon Kremer, Karajan with the BPO and VPO), smaller chamber orchestras on modern instruments and a variety of ensembles with period instruments and Baroque playing styles. Yet not many listeners are aware of the complexities involved in publishing a reliable manuscript of 'The Seasons', compared say with Beethoven's Fifth Symphony.

The date of writing can only be established as "before 1720". We know that Vivaldi was inspired by a set of paintings of the Seasons by Marto Micci to write a season cycles of violin concertos, and he also most probably wrote the pictorial sonnets which were later attached to the first printed but slipshod version by La Cene (1725). This version of "The Seasons" appeared as part of other sets in Vivaldi's Op. 8, "The Contrast Between Harmony and Invention") and began the popularity of programme music; it has been the version still most in use. However, the finding of more possibly earlier MSS around Europe showed that there were versions with corrections of errors in La Cene's version.

Arguably the most important pre-La Cene version is the set of part-books belonging to Cardinal Ottoboni and now in Manchester (England) Public Library. Sonnets are present, but the partbooks are without captions. According to Christopher Hogwood's preface for a new Bärenreiter Urtext publication of "The Four Seasons" (2002), "In some passages, the Manchester version in parts gives a radically different reading from the better-known published text". He cites the antiphonal lightning flashes between first and second violins in La Primavera.

The Manchester "Seasons" indubitably improves significantly on the La Cene version, in articulation, figuring, chromatic inflection and corrections of misprinted notes, some hallowed by tradition. For this recording, Helmut Branny's choice of score is basically the Manchester version; he does, however, make some other decisions or adds some elements not in the Manchester version. It is common for conductors to "polish" a score to accommodate players, state of acoustics etc in details.

I sat down to listen to "The Four Seasons" on this disc with my pen and paper poised, but was so excited by the gripping performance that I had to listen three times before I could notate detailed information. Coherence of ensemble, depth of tone from the orchestra and its excellent internal balance, restricted vibrato, dramatic tension where required, seamless relationship between Susanne Branny's breath-taking virtuosity in her solo and her accompanists, clean textures, convincing tempi and marvellous rhythmic bounce combine to produce satisfying capture of the moods of Vivaldi's sonnets, which themselves are clearer than I have ever experienced before.

The sonnets themselves, however, are not printed in the booklet, which instead provides succinct summaries in English & German of the sonnet for each season, which are quite handy to have while listening. My previous personal favourite of "The Seasons" (Nils-Erik Sparf, Drottningholm Baroque Ensemble (BIS, 1984)) sounds somewhat abrasive these days (and is a La Cene version); it is now supplanted by Kapellsolisten. It would be interesting to see if, sometime, Rachel Podger and her Brecon Baroque release their Vivaldi's Op.8 (or just "The Four Seasons") on SACD or DSD download for comparisons...

Instead of a collection of Vivaldi's other concerti, Ars Produktion have married "The Seasons" with Telemann's Ouverture-Suite TWV 55:G10, "Burlesque de Quixotte" (1761), which incorporates music from Telemann's Don Quixote opera from the same year. Miguel Cervantes’ 1605 library masterpiece, Don Quixote, has inspired many musical interpretations in the last four hundred years, and this story provided much material for Telemann's version of programme music, different to The Seasons' environmental source. Telemann's themes dealt with Don Quixote and his servant Sancho Panza, and their adventures.

Dresdner Kapellsolisten's performance shows that Telemann's virtuoso is not that of Vivaldi's cascades of notes, for his scoring is quite simple in textures and harmonies, but of subtleties of expression, which they play vividly, often with a tongue-in-cheek humour. For example, in part 2 the Don is slowly awakening after the brash French Overture in Part 1, strings quietly rocking a lullaby and his movements creaking as he slowly gets up. In the next part, we find the archaic en route Don vigorously fighting some windmills, giving the lower strings a chance to be fiercely rampant. In part 4 we encounter the Princess Dulcinea, adoree of the Don, who day-dreams and night-dreams about her. The upper strings are gorgeously tender in their atmosphere of Love as they sigh everywhere (the sigh, two notes, one dropping down, was a fashionable piece of scoring right up to Mozart). After portraits of the associated animals, come Pancho Panza's mule and the riotous next movement about the galloping of the mule and his ageing (but loyal horse), Rosinate, Instead of an expected gentle ending, Telemann gives us a gentle finish. The "Burlesque de Quixotte" is a delightful piece, played with aplomb by an affectionate ensemble.

The major success of the Kapellsolisten on this disc is largely due to its near-perfect sound-stage. Indeed, it is the best of the 50 Vivaldi recordings I mentioned above. Good quality microphones are in carefully thought-out settings so that the result sounds fully natural - so clearly that every player can be located. The Lukaskirchen in Dresden is a Lutheran church converted to a concert hall, giving a generous ambience to the intimate ensemble, which is softened by a high wooden wall around the back and sides of the stage. For the Telemann, there is audibly more openness in the ambience, providing suitable pseudo-grandeur for the Quichotte Suite. Needless to say, the 5.1 track has more audio information than mere stereo.

In both cases, Kapellsolisten capture the spirit of each composer, producing, in my case at least, a disc which has remained inside my player so I can play it again and again. Highly recommended. 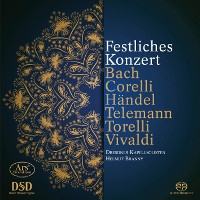 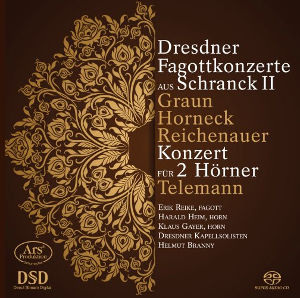