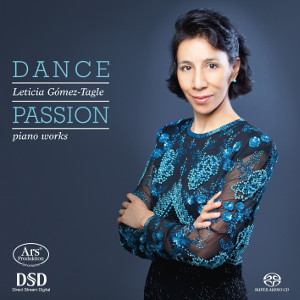 Under the name ’Dance Passion’ Leticia Gómez-Tagle aims at combining her passion for European as well as for Latin-American dance music, since - thereby using the words of the French playwright and actor Jean-Baptiste Poquelin, alias Molière - “There is nothing so necessary for human beings as the dance”.

For those less familiar with this pianist, Leticia Gómez-Tagle is known in Mexico as the Mexican Chopin by virtue of her musical preoccupation with the music of this Polish master; first winning a local Chopin contest (Sala Chopin) and later on through her participation in the 1990 International Chopin Competition in Warsaw, Poland.

No wonder that she gives Chopin such a preeminent attention, with two Mazurkas (a folkloristic dance from Mazovia) and around 14 minutes of ‘Andante spianato et Grande Polonaise Brillante’. Other European ‘participants’ in the Euro-Latin dance party are Liszt (Valse-Caprice), Brahms (two Hungarian Dances) as well as two Spanish representatives: De Falla (Danza de Molinero) and Albéniz (Sevillanas). This part of the recital is well played, with subtle accents and a typical feminine ‘toucher’, even in the Hungarian Dances, albeit with a slight Latino twist. But where Ms. Leticia really excels, is in the music of her roots. There where children are born with dancing legs: Central and South America.

For me it is this second part of the recital, starting with a touch of mother Spain that wins the day. Here Gómez-Tagle takes the listener by the hand ánd the soul on a journey of a largely unexpected musical adventure. Not that all chosen composers are unfamiliar, but most of the pieces she plays are. At least to me. They are all 20th century dances in various rhythms like Tango, Malambo, Habanera, Bolero and Joropo (or fandango).

With some of them it is almost impossible to keep your feet still; so much ‘contagious’ is Gómez-Tagle’s impressively fascinating play, which, as one can see from the photographs in the booklet, is not so surprising, her being an ardent Flamenco as well as a confirmed ballet dancer.

The ultimate surprise is the final ‘bridging back to Europe’ dance: “Tanz der seligen Geister” (Dance of the Blessed Spirits) of Christoph Willibald Gluck, transcribed for piano by the Italian 19th century composer Giovanni Sgambati. All the thus far so pleasantly agitated moods are brought back to rest.

All in all a truly interesting and sympathetic bridge-building recital capturing dance history from Europe in conjunction with exploring such forms and developments in modern Latin-America. Daniel Knaack’s liner notes make for much informative reading.

The multi-channel recording is beyond reproach: natural and well balanced piano sound is assured thanks to Schumacher & Co.

Would recommend this for the Iberian and Latin pieces.