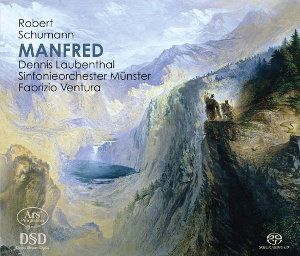 Theater Münster and ARS-Produktion enrich the Schumann catalogue with a stunning and monumental performance of an (almost) complete Manfred Dramatic Poem.

This the second release in Super Audio of a complete version of Manfred. But appearances are often deceiving. In fact, such complete versions are rare, in any format; in the concert hall as well as on disk. As far as I know there are two more, one on RBCD with text in English (Beecham/historic) and another on DVD (2010 Tonhalle Dusseldorf) in German with English and French sub titles. For several reasons the first ‘modernized’ version on SACD did not really hit the moon. We must, therefore, be extremely grateful for ARS-Produktion surprising us with another opportunity to add this neglected work to the Schumann catalogue.

For this recording they have turned to a local symphony orchestra, ditto choir and an extensive cast of actors and singers, whose names are, as yet, not internationally recognized household names.

Before going any further, let me briefly explain what it is about. Point of departure is Lord Byron’s dramatic poem ‘Manfred’, with which Schumann became familiar already at an early age, his father being a well-respected bookseller, publisher, and novelist. This poem left a deep imprint on young Robert, haunting him for quite some time. But it was only much later, in 1848, when a new German translation got him firmly hooked on the dramatic metaphysical and mystical content, undoubtedly inter-acting in a decisive manner with his own, unstable state of mind. This resulted in his outspoken wish to use it for a monumental composition: “Dramatisches Gedicht in drei Abteilungen”. It is a mixture of texts and music; most of the text is recited, with and without music, some is sung. He reduced the original by around 20 percent, of which, according to the liner notes, another third has been omitted for this recording. The German text is from a free translation of Karl Suckow (1837), as edited by Schumann and modified for this recording; the English text is Byron’s.

For the story I may limit myself to this quote: “Manfred is a nobleman living in the Alps, tormented by some unknown guilt involving his dead beloved, Astarte. He uses his supernatural powers to summon seven spirits and commands them to make him forget his unnamed sin. They cannot do so, having no power over the past. Unable to forget, and unable to commit suicide, Manfred struggles to find peace. His eventual death is a stirring rebuke of spiritual authority”. (Hanson, Marilee. "Manfred Dramatic Poem" April 19, 2015)

As to the artists:

Many will not be familiar with the Sinfonieorchester Münster, a city orchestra like there are so many in Germany, serving the local cultural scene. And since we must learn to make our judgments on the basis of what we hear and feel, rather than follow prejudices and notions like 'unknown, unloved’, I have to say that on the basis of this performance the quality of this orchestra is such that it may be ranked among the country’s sub-top, which is, in Germany, by no means a disqualification.

Its present Chef, Fabrizio Ventura, may not be so well-known either. But there, too, we must realize that many an honorable Chef doesn’t make it to the Berlin Philharmonic. Judging maestro Ventura on what he does and what I hear, I have not the slightest doubt about his musical and inspirational qualities. On the contrary. With the help of Frank Behnke, ‘schauspieldirektor Theater Münster’ (impresario), responsible for the coordination of the spoken texts, he holds overall control as a first rate Musical Director.

Actors and the quartet of singers (soprano, mezzo, tenor and bass), many or all of them permanently or regularly connected with (opera) productions in Theater Münster, are more or less of equal level. As said before, their names are not common currency, but for me the importance is that there is no imbalance in quality. Much care seems to have been given to reach an overall equilibrium between orchestra, actors and singers alike. The choir’s participation is limited, but their masterly part in ‘The Spirits’ (13), together with the orchestra, sounds wonderful, as does their muted singing in the closing scenes. The thrust of the reading is carried by Dennis Laubenthal with a clear and theatrical diction, as it should be, though Aurel Bereuter, in his role of Abbot, also contributes largely to a moving apotheosis.

Here we have a prime example of what is possible when you have an interesting project, a fine orchestra and a wholly involved cast of artists. Everything is just right, well balanced and above all creating a very sympathetically musical experience, as one would love to have it in its own home town. It shows what good planning, expert recording and committed artistry can do

As for the recording:

The recording is done live on location (April 28 - Mai 3, 2015). There is no or little noise from the audience and Manfred (!) Schumacher c.s. have created a wide surround, with the orchestra radiating warmth, the same warmth with which I recommend this enterprising project as a must to Schumann adepts, though I believe that all lovers of a well-conceived combination of romantic music and poetry will probably enjoy it just as much as I did.

Manfred’s voice comes from the center speaker. Surround set-up’s without it won’t do much good. The voice becomes almost inaudible as though Manfred stands somewhere in the Hall without microphone. People with a 4 speaker surround should either connect a center speaker or listen in stereo. However, in that case they would rob themselves of much of the three dimensional liveliness of the recording.

And another, minor thing, the recording is packed in a double jewel box, but there is only one disk in it. I think that it is because the booklet, containing many pages with the libretto in two languages, is too thick for a single box. No disk is missing!