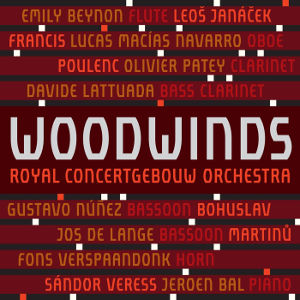 
After 'Brass' (RCO 07002) and 'Brass Too' (RCO 14010), recorded by the Brass of the Royal Concertgebouw Orchestra, the Woodwinds of the RCO proudly present their own cd.

Traditionally most RCO members love to engage in chamber music as well and the woodwinds section of the orchestra is no exception. In the past woodwind ensembles like the Concertgebouw Sextet (1909-1937) and the Danzi Quintet (1958-1978) have even been very successful outside of the Netherlands. This SACD pays homage to this tradition.

Moravian composer Leoš Janáček's sextet 'Mládi' ("Youth") was written in 1924, when he was eighty. Curiously, he was inspired by happy memories of his youth, when he was schooled in the Royal Clerical College at Brno. Not quite angel-like as a chorister, he unleashed a lot of mischief on his tutors and musical jokes on his class-mates. This wild, boyish romping mood, larded by many folk tunes, is expressed in three of the suite's four movements, while the second movement calmly dreams introspectively, giving beautiful contrast. Instrumentation requires the flautist to use the piccolo as well, and a bass clarinet is added, providing some dark, deep gurgling sounds which add to the colourful instrumentation. Harmonies are of their time, often dissonant, but basically tonal, and the score's basic rhythms such as17/16 add to many other technical challenges which are treated with aplomb by the RCO wind players.

Bohuslav Martinů (1890-1959) absorbed not just his local Moravian folk music but that of Prague, Paris, southern France and New York. His 1929 Sextet for piano and wind instruments (H.174) is one of the finest of his considerable output of 90 chamber music pieces. The five movements include a Preludium with light-hearted French influences and jazzy moments, and a solemn Adagio using a lyrical folk-like theme, which is passed to each instrument and oozes charm. The third movement is a vivacious and dazzling Scherzo for solo flute and piano, which was also published as a single movement, much-loved by flautists (and judges at International Competitions). The fourth movement is labelled 'Blues', which begins with a gentle rocking melody moving into various sequences of off-beat syncopation with tongue-in-cheek humour. The finale, 'Con moto' manages to merge all these influences in Martinů's repertoire in a showing-off scramble for each instrument.

Putting aside the sextet, the programme's next piece is a little known early work, Sonata for Oboe, Clarinet and Bassoon (1931) by Sádor Veress (1907-1992). Veress was of Hungarian origin but went to Switzerland in a second stage of his musical career. As a teacher, his pupils included György Ligeti, György Kurtág and Heinz Holliger. It was in this sonata that he first used his "new" approach to musical structures such as sonata form, basically only using one theme, not too or more, which was developed in different ways in each movement - "prism-like" explained Veress. Again, there is no doubt that much of his material too is folk-based. This attractive little sonata is played with especially strong empathy by the RCO soloists.

Returning to the sextet, one of Poulenc's best known chamber works, 'Sextet for five wind instruments and piano' (rev. 1939) is clearly in direct response to a "new" artistic trend of music in France, suggested by Cocteau. All Romantic means of expression were to be avoided, while simplicity, commonplace and balance between emotion and reason were to be promoted. The first movement of three is cheerful, astringent and energetic in a neo-classical way, with a central emotional and poetical theme, expanding to a richly emphasised climax. 'Divertimento' is the name of the second movement with a lovely oboe theme, soft and expressive. Two shocking loud chords usher in the sizzling Finale, which shows many faces of the "Les Six", a group of French composers, of which Poulenc was the youngest. He had cycles of manic-depression, which seem to be referred to in this movement, with mood-shifting particularly in the coda, where jazzy, blaring bars interrupt but give way to a gloriously dreamy conclusion. This piece seems to echo acritic's apt description of Poulenc; "part monk, part rascal".

Recorded in Polyhymnia's state of the art studio in the Concertegbouw, usingone of it's smaller halls to judge from a session photo, the sound stage is intimate but airy, particularly in 5.0 multichannel. Each of the instruments have their distinctive characters revealed by the subtle reproduction of overtones and different dynamic ranges between instruments such as piano and flute are impeccably balanced. An informative booklet in English, French, German and Dutch is well illustrated by photos of the players, but there is no further information about them but their web site addresses.

As the players are part of the RCO's wind section, they play with mature and wholly integrated purpose, highlighting the modernity of sonorities as each composer used them. Their technically challenging mastery gives much enjoyment from this inspired programme, aided by the transparency and detail of the Polyhymnia recording. Recommended for lovers of wind instruments and listeners to unhackneyed chamber music.