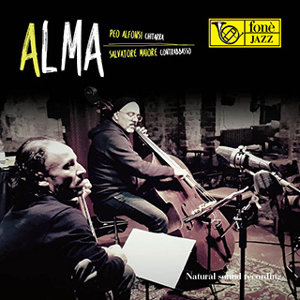 Fingerstyle classical guitar and bass: the combination doesn't immediately suggest jazz. Under many definitions of "jazz" (with the understanding that a definition must exclude more than it includes), Alma, composed and performed by Peo Alfonsi, guitar, and Salvatore Maiore, bass, would not be so labelled. Like so many recent European instrumental music recordings by artists trained in classical and jazz traditions, Alma stands outside of clear genre boundaries.

Since the late 1960s, acoustic guitarists in Great Britain, the US, Latin America and Europe have been incorporating a wide range of influences into their productions. African-American folk blues strongly influenced Bert Jansch and John Renbourn, as did Scottish dance tunes and Italian tarantellas. Yet there is a difference between embracing a musical style that is not native to one's own cultural tradition, and being raised in the culture that generated that style.

The songs on Alma were composed by the two players. The project overall sounds like Italian music, and mostly not like jazz, though both players perform and record in other jazz projects.

Guitarist Peo Alfonsi obtained a diploma in classical guitar studies at the Conservatorio di Cagliari. His discography includes Bach lute suites and Villa-Lobos guitar pieces along with pop and jazz sessions. Alfonsi's through-composed, multipart songs remind me of Pat Metheny's duets with Charlie Haden (Alfonsi has performed with Metheny); there is sufficient room for melodic development built into the structure of the tunes that his choice not to solo over the changes seems valid—if un-jazzlike.

Bassist Salvatore Maiore is also a diploma-holder from Conservatorio di Cagliari. A member of Stefano Battaglia's piano trio, Maiore can be heard to excellent advantage on Battaglia's ECM recordings. Maiore is less diffident about his jazz orientation than Alfonsi. On Alma, he contributes tightly-arranged forms that frame his own and Alfonsi's melodic solos.

Alma was engineered, recorded and mastered by Fonè Records label owner Giulio Cesare Ricci. His classic Neumann microphone kit captures the sound of the instruments in situ, in the "medieval cellar" of Il Castello, a hotel in Tuscany. The musicians, though depicted in photos seated some distance apart, don't sound as distinctly located in the reproduced soundstage, and to my ears, are slightly over-balanced towards the right channel of the dedicated two-channel recording. Undoubtedly, that is exactly how Signor Ricci heard the music; his intention is to represent the musical event as closely as possible within the limits of recording technology. The virtual positioning of the instruments sounds more or less precise depending on my distance from the loudspeakers, and whether I'm seated or standing. Other listeners may perceive the recorded soundstage differently on their systems.

There is a mood of calm introspection that pervades the whole set, even in the dance-rhythm tunes. Alma offers perfect late-night listening; the atmosphere of the Tuscan "medieval cellar" translates into your listening room so effectively that the distance between audience and musicians is erased.