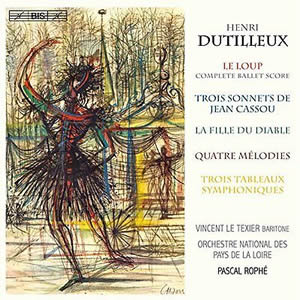 
The name of Henri Dutilleux is associated above all with orchestral music. His international reputation originated with the Second Sym­pho­ny, ‘Le Double’ (premièred in 1959) and was confirmed by works such as Métaboles and the cello concerto Tout un monde lointain… But what about before that? In the centennial year of the composer's birth, the Orchestre National des Pays de la Loire and Pascal Rophé present a programme which focusses on works composed before 1954, and offers the opportunity to discover a less familiar but by no means negligible side of Dutilleux's creative activity: songs and music for the theatre and film.

Several of the works on this disc are recorded for the first time in these versions, or indeed at all. Performed by the French baritone Vincent Le Texier, Éloignez-vous – one of the Cassou settings – and Quatre Mélodies appear for the first time on disc in the version for orchestra. The complete score of the ballet Le Loup only exists in a recording made in 1954, while the Trois Tableaux sympho­niques – originally composed as incidental music for a stage adaptation of Wuthering Heights – and the extracts from the film score La Fille du Diable are here made available on CD for the first time.

This all new repertory to SACD has been recommended by 3/3 listeners but there are no reviews. It is a tempting disc for those reasons but the orchestra and conductor are completely unknown to me so some guidance on performance would be very much appreciated. Any offers?

As one of the "recommenders" I ought to repeat what I said on that subject back in the sacd.net days. All recommended means to me is that I enjoy listening to the disc and am pleased to have it in my collection. And so, I guess you could call most of this disc "the lighter side of Dutilleux". Except for the two song cycles, about 21 minutes total, which are mostly dark, the disc comprises a ballet, extracts from a film score, and some incidental music for a French staging of a play based on Wuthering Heights. In other words those three pieces are intended to be, or to accompany, "entertainment". Taken together there is much more melody and almost traditional harmony than one finds in the pieces that made Dutilleux"s reputation. In order to give you my best information I even listened to the recording in stereo. In that mode it's a little on the thin side, especially in the strings, but then that's the opinion of a guy who listens to almost everything in mc (switching to mc the thinness is not quite so apparent). Neither the orchestra nor conductor are familiar to me, but it's a hundred piece band that gives two hundred concerts a year and he's apparently a specialist in modern music, so chalk that up to my transatlantic ignorance of most things European. As I implied at the start I think it's enjoyable, and I've given it a spin several times, but it's not a "must buy".

Thanks Bill, your synopsis is very helpful indeed. Compilations of a single composers works or extracts of works are not all that appealing to me but there is a dearth of Henri Dutilleux on SACD so this disc brings more focus.

How good along the way to be reminded of one of Bill's contributions to these pages - I forget how many discs he persuaded me to buy, and I don't think I ever felt disappointed. I think I must have skimmed over this one at the time because I am generally allergic to Dutilleux, but reading again - well, perhaps! My reason for writing here is that, whilst I have not heard this disc, there is now a sequel by the same forces containing music by Roussel and Dukas. Rophe's way with the Roussel ballet really is excellent, and he makes a good case too for the unfamiliar (to me) piece of Dukas which I am glad to have. The orchestra sound like an exellent ensemble in every way and the recording is one of BIS's best - if all that applies to the Dutilleux disc, presumably recorded in the same location by the same people, then it may well be an interesting and rewarding buy.

On a slight tangent, therefore a seperate post, a warning re Europadisc that in my experience their packaging leaves something to be desired relative to, say, Presto's. This may well be pertinent if you are ordering one of Bis's new "green" sleeves as I have had items arrive slightly bruised from their journey. On the same note, has anyone on this site perfected a way to get the sticky seal off new BIS sleeves without leaving a fingernail indent in the soft card surface of the sleeve? 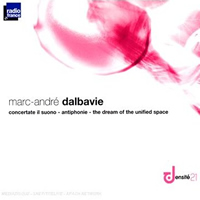