A Bassoon in Stockholm… - Agrell 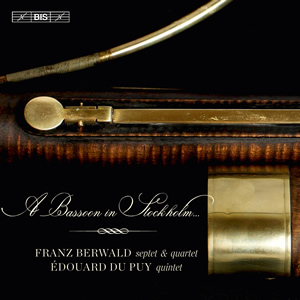 
In the mid-1980s, Donna Agrell acquired a rare Grenser & Wiesner bassoon, built in Dresden sometime around 1820. She has been using it for more than 1,500 performances since then, many of them with the Orchestra of the Eighteenth Century, of which she has been a member since it was founded. The bassoon came in its original case, with an address label indicating that the instrument had been delivered to Stockholm. Further research into the Stockholm music scene during the early 19th century revealed that instruments from Grenser & Wiesner were popular in Sweden. One who swore by his bassoon from the company was Frans Preumayr, a musician of German origin who played in the orchestra of the Royal Opera, but also made a name for himself abroad as a bassoon virtuoso, garnering praise in London and on the continent. Such a gifted player naturally inspired composers to write for him, and these included his father-in-law, the clarinet virtuoso Berhard Henrik Crusell, the flamboyant music director at the Stockholm opera, Édouard Du Puy, and a young Franz Berwald, employed among the strings of the opera orchestra.

For the present recording Donna Agrell has chosen three chamber works which were all premièred with Preumayr on the bassoon. She is joined by colleagues from the Orchestra of the Eighteenth Century as well as by Ronald Brautigam – all of them playing period instruments – in Berwald's celebrated Septet in B flat major and the less well-known Quartet for piano and winds, and in Du Puy's Quintet for bassoon and strings.

It may be coincidence, but recently quite a number of bassoon concerti came to the HRAudio reviewing tables, no doubt pleasing many adepts of this instrument. And here is another one: ‘Bassoon in Stockholm’. The title looks misleading, because only one of the three compositions is specifically written for Bassoon (and strings). But the small print explains everything. On record are Chamber works associated with the German bassoon virtuoso, Frans Preumayer, who settled in Stockholm in the firsthalf of the 19th century, bringing with him a Grenser & Wiesner bassoon from Dresden; an (almost) identical instrument used by Donna Agrell in this recording. Hence the title: the bassoon in Stockholm.

In the course of the 18th century Carl August Grenser’s workshop, built a widespread reputation in Germany and abroad with his bassoons. And it was Samuel Wiesner, who took over manufacturing in the 19th century. The Grenser & Wiesner bassoon was born. Originally the bassoon was mostly part of the ‘basso continuo’, but with the improvements in quality it increasingly gained in importance as a solo instrument (Vivaldi), however, losing ground, in the romantic period as it could technically not keep up with more demanding musical requirements. Bassoonist Donna Agrell, assumedly the prime instigator of 'Bassoon in Stockholm’, proves that the instrument she ‘had the good fortune to acquire’, can nonetheless do wonders in the romantic era, provided it’s held in the right hands.

For many, Franz Berwald is an unjustifiably neglected, romantic composer. The best way to prove it is to play his Grand Septet in B flat major. While it is not innovative, doesn’t carry any deeper thoughts and is copied from such composers as Hummel and Beethoven in that it uses the same proven combination of instruments, it gives an immense pleasure to listen to. All it needs is being well played by competent musicians. The Gaudier Ensemble has been, and probably still is, a long time champion of it (and other Berwald chamber works) and they recorded the septet for Hyperion in 1995. However, in comparison I find this new version a clear winner. Not just because of the multi-channel high resolution sound, but most of all because of the superb cast of international musicians.

Looking at their respective bio’s, one becomes aware of another binding factor: ‘The Dutch Connection’. All players are one way or the other connected to the Netherlands. Members of the late Frans Brüggen’s ‘Orchestra of the Eighteen’s Century’ and/or involved in the Amsterdam and The Hague Conservatories. The recording venue, too, was in The Netherlands (Doopsgezinde Kerk, Haarlem), with generous support from ‘Charles Burney Fonds’ (Prins Bernhard Cultuurfonds), Leyden University and the ’Academy of Creative and Performing Arts’ (Academie der Kunsten). How Dutch can one get? Practically all musicians play on ‘real’ period instruments, a guarantee for a mellow-ish sound. Special mention deserves the beautiful and natural sound of the horn, played by Teunis van der Zwart. That said, much of the credit for blending the group so well together goes to the sound engineers.

The septet being already sufficient reason to buy, there are two more interesting pieces:

Firstly, the Bassoon quintet of Édouard Du Puy. The liner notes explain in extenso his Francophone Swiss born background and subsequent fleeing from Napoleon’s France to the Nordic part of Europe, where he build up his compositional life. One of the lhe links to the concept of the disk is a note in Frans Preumayer’s travel journal that he played this quartet as bassoon soloist in Copenhagen. Far-fetched or not, Donna Agrell gives us the opportunity to familiarize with an example of this composer’s largely unknown output. The only other recording that I know of comes from the same BIS stable under the title ‘The Romantic Bassoon’!

And secondly, Berwald’s Quartet for piano, clarinet, horn and bassoon. Here comes the ‘eccentric romanticist’ on scene. It would seem as though Berwald tried to seek new ways in composing, without getting too extravagant, with a view to stirring up Swedish conservative taste and cultural narrow mindedness (as he saw it). He was not successful in his own country (Franz Liszt said he liked it, though) and it was certainly not to the taste of an unknown Swedish critic who attacked Berwald by saying (according to the liner notes):
“It seems as if Herr Berwald in his hunt for originality and striving to be impressive solely by means of effects, expressly banished anything melodious in his compositions; for how can one otherwise explain these eternal modulations from one tonality to another, which made such a dreadful impression and gave one’s powers of attention no rest..”
Berwald took offence immediately, defending his ‘original style’. It was of no avail; it made things probably worse.

Listening to this quartet, one can understand the part of the ‘eternal modulations from one tonality to another’ and how that must have affected local parochial taste, but to our modern ears it is nowhere near ‘inovative’. Although it is not exceptional, it is all the same a pleasant piece to listen to. And as this is a seldom played work, it is at any rate a welcome addition to the Hi-Res catalogue, certainly the way it has been saved from oblivion by an excellent Brautigam and his eminent wind companions.

It may be clear that this disk is not just about three pleasing compositions; it’s an intellectual concept that merits more than passing interest. It invites to discover less familiar corners in musical history in general and bassoons in particular. For this purpose the liner notes make reference to “Donna Agrell: Repertoire for a Swedish Bassoon Virtuoso: Approaching early nineteenth-century works composed for Frans Preumayr with an original Grenser & Wiesner bassoon, Leiden University, 2015”, for those wanting to know more about it.

BIS is doing the Hi-Res community a great service, delivering the music in such a rewarding multi-channel sound quality. Although clearly advertised as having been done in 24 bit/96 KHz PCM, it has in its ultimate DSD format the hallmark of the very best in recording. I don’t exactly know how they do it, but I’m only too glad to accept it as it is: Simply superb!