The stereo layer is fine. The surround layer is poor. 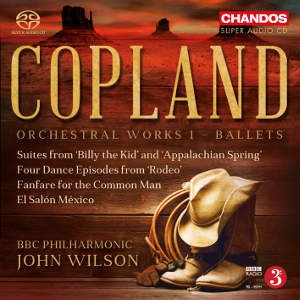 
For this new series the conductor John Wilson, a BBC Proms favourite, for the first time joins the BBC Philharmonic on Chandos, in orchestral works by Aaron Copland. This first volume features the suites from the American composer’s most famous ballets.

Written in 1938, the hugely successful Billy the Kid is a fine illustration of the limpid orchestration and clarity that Copland achieved in works made famous thanks to their popular accessibility. Similarly, four years later, in Appalachian Spring, he created a lastingly influential American soundworld, firmly rooted in the diatonicism of simple folk melodies. A third ‘nationalist’ ballet, Rodeo, and Fanfare for the Common Man were composed in the same year, 1942, the latter being possibly the most instantly recognizable piece in the history of American orchestral music. The energetic dances and national melodies of El Salón Mexico reveals Copland’s other use of folk material, as a musical souvenir of foreign lands that had made an impression of him.

This album was recorded two months after a highly successful concert broadcast live on BBC Radio 3.

Hard on the heels of a recent Copland collection by Andrew Litton and the Colorado Symphony Copland: Billy the Kid, Rodeo, El Salón México - Litton comes another recommendable one from John Wilson and the BBC Philharmonic, the first volume of a projected series of Copland orchestral works for Chandos. The programmes offered by Litton and Wilson are similar but not identical – 'El Salón México' being the single work common to both discs.

The opening item on this SACD is Wilson's imposing account of the celebrated 'Fanfare for the Common Man' for brass and percussion. This was one of eighteen fanfares from various composers commissioned in 1942 by Eugene Goosens and the Cincinnati Symphony as, to quote Goosens, “...stirring and significant contributions to the war effort”. After the war Copland re-worked the piece and memorably incorporated it into the finale of his 3rd Symphony. Wilson's delivery of the Fanfare is more measured than many performances on disc, but by adhering to the composer's tempo marking 'very deliberate' the grandeur and nobility of the piece are allowed to emerge with striking effect. One can hardly fail to be impressed as the sounds of the incisive brass, bass drum and tam-tam strokes resonate thrillingly round the recording venue.

The remaining four works on the disc do bring them into direct competition with the definitive Bernstein recording Copland: Appalachian Spring, El Salon Mexico etc. - Bernstein which for many remain hors concours in spite of its age. Wilson, however, brings the flair and panache familiar from his many performances of music from the stage and screen to these ever popular American classics with equal success.

Thanks to his subtle use of rubato and the scintillating playing from individual members of the BBC Philharmonic, Wilson captures the humour of El Salón México to perfection, while every detail of Copland's brilliant orchestration is sharply etched in the fine Chandos recording. The same is true of the three ballet suites which surely match the best available on disc. Choose any fast section in these pieces and you will find terrific vitality and rhythmic buoyancy in the playing; the final Hoe-Down from 'Rodeo' being just one example. But Wilson is also capable of relaxed tenderness when required, as in the atmospheric Prairie Night section of the 'Billy the Kid' suite and similar episodes in much of 'Appalachian Spring'. By any standard this is an impressive achievement.

To the best of my knowledge, this is the first surround sound SACD (24-bit / 96 kHz) that the BBC Philharmonic have recorded in the orchestra's home at MediaCityUK, Salford, and for that reason alone it will be warmly welcomed by readers of HRAudio.net. As someone quite familiar with the clean and bright acoustic of this venue I can confirm that engineer Stephen Rinker has done a marvellous job in capturing just the right amount of ambience of the studio, something that considerably enhances one's enjoyment of these fine performances. It is to be hoped that future releases from this versatile orchestra will appear in multi-channel SACD rather than just stereo CD.

On both musical and sonic grounds, a warm recommendation is warranted for this release. 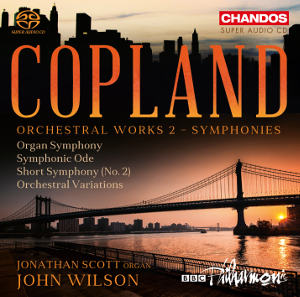 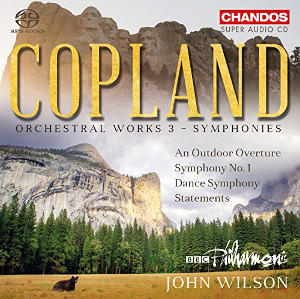 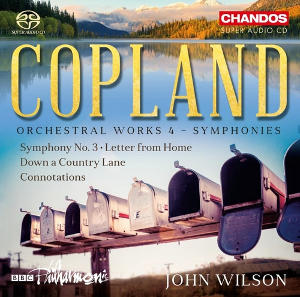