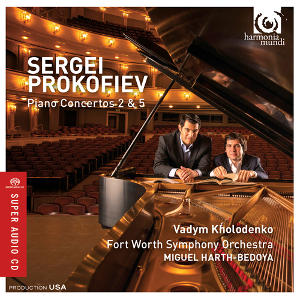 
2013 Cliburn Gold Medalist Vadym Kholodenko became the first-ever 'Artist in Partnership' with the Fort Worth Symphony Orchestra beginning in 2014-15. Under the baton of Miguel Harth-Bedoya he opens his complete cycle of Prokofiev piano concertos with the 'dark-hued but dazzling' No. 2 in G minor, coupled with the less familiar No. 5 in G major.

The first release in Vadym Kholodenko's projected cycle of Prokofiev's 5 Piano Concertos for Harmonia Mundi couples two of the composer's least performed concertos (2 & 5) in thrilling accounts that make one eager for the completion of this enterprise – (Concertos 1, 3 and 4) scheduled for 2016/17.

Ukranian born Kholodenko was the winner of the gold medal in the prestigious Van Cliburn International Piano Competition in 2013 and unsurprisingly has been garnering glowing reviews for the virtuosity of his playing - something that these days is almost taken for granted with concert pianists - but also for the thoughtful musicianship of his performances. The challenges of Prokofiev's formidable 2nd Piano Concerto display both these qualities to the full. Kholodenko's account of the opening movement is richly expressive from the start and the monumental cadenza that occupies more that a third of this movement is delivered with fearsome power and weight.
The Scherzo is deftly played, with Miguel Harth-Bedoya and the Forth Worth Symphony Orchestra providing alert and characterful support both here and in the Intermezzo that follows. The Finale is notable for the lightness of touch Kholodenko brings to the more lyrical passages and the incisive vehemence of his articulation.

The 5th Concerto also receives a performance that makes its comparative neglect perplexing. The dominant angularity of Prokofiev's writing and the wistful lyricism found in the fourth movement spark a performance of muscular strength and mercurial wit from from Kholodenko, while Miguel Harth-Bedoya and the Fort Worth Symphony Orchestra bring rhythmic acuity and pungency to the composer's distinctive orchestral pallet.

Both works were recorded live at the Bass Performance Hall, Fort Worth, Texas in October 2014 (Concerto 2) and March 2015 (Concerto 5) and conspicuously benefit from being recorded, edited and mastered in DSD by engineer Brad Michel. The perspective is close, presumably to avoid any trace of audience noise, and though the balance certainly favours the piano, comparatively few orchestral details are lost. Overall the sound is remarkably rich and vivid.

A most impressive release.

On first listening, this new performance of the 2nd Concerto surpasses Prokofiev: Piano Concertos 1, 2 & 4 - Gavrylyuk, Ashkenazy. While I appreciate Alexander Gavrylyuk's poetic interpretation, I find Gavrylyuk too engrossed in small details of phrasing; he loses momentum in the dramatic first movement cadenza. That is not the case with Kholodenko's luminous and coherent performance, though his tempi are nearly the same as Gavrylyuk's in the first movement.

Two LPs in my collection of the 2nd Concerto from the late 50s and early 60s, Ashkenazy's live performance in Moscow with Kondrashin and Malcolm Frager's in Paris with Rene Leibowitz, have a quality that is harder to detect in the Kholodenko and Gavrylyuk recordings, an expression of the anxiety and melancholy that Prokofiev experienced, living through war and barely surviving the oppressive Stalinist cultural regime post-war. Not to sound facetious, but I think if this recording had been made last year in Kiev rather than Fort Worth, it would have recaptured that quality.

I found the 2nd piano concerto in particular strangely unengaging but not quite sure why. Something is missing that's for sure. I have not heard of the soloist, the conductor nor indeed this particular orchestra before and perhaps from such an inexperienced line up one cannot expect too much. On this evidence this survey is not going to tear up any trees. I will stick with Gavrylyuk for now even 'though that set leaves much to be desired also.

Very sad news regarding this artist and his family: http://www.star-telegram.com/news/local/community/fort-worth/article66857502.html
He was scheduled to record the Prokofiev 3rd in Fort Worth this weekend.

How tragic. Thank you David for sharing that with us.