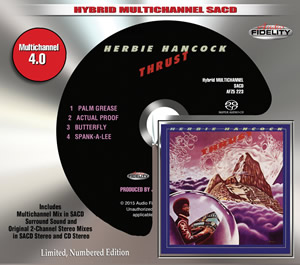 
Thrust, the 1974 follow-up to the breakthrough Headhunters album was virtually as good as its wildly successful predecessor and it also reached #13 on the Billboard LP chart.

Herbie Hancock continued to reach into the rapidly changing high-tech world for new sounds, most notably the metallic sheen of the then-new ARP string synthesiser which was already becoming a staple item on pop and jazz-rock records.

The set includes four extended tracks, three of which concentrate on the funk with plenty of Hancock's wah-wah clavinet, synthesizer textures and effects, and electric piano ruminations that venture beyond the outer limits of post-bop. The change-of-pace is one of Hancock's loveliest electric pieces, "Butterfly," a match for any tune he's written before or since.

The lineup for Thrust present a tightly knit ensemble that could turn a groove inside and out without losing its center. Credit the rhythm trio of electric bassist Paul Jackson, drummer Mike Clark and percussionist Bill Summers and the consistently convincing playing of reedman and indispensable colorist Bennie Maupin, another Miles Davis alum.

A really lovely mastering - and the best one available for this album, unless and until we get boutique reissues a-la Head hunters.

Also, this is the only digital version of the quad mix out there currently.