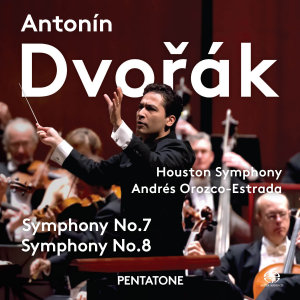 
Owing to his great talent for melody and the delightfully fresh Czech character of his music, Antonín Dvořák achieved worldwide recognition. His technical abilities and rich melodic inspiration enabled him to create an oeuvre that includes masterpieces in many, if not all musical genres.

In total, Dvořák wrote nine symphonies, the last five of which are called his “Mature Symphonies”. Included in this SACD album are Dvořák’s symphonies nos. 7 and 8, each of which, though different in character, represent Dvořák at his best. Symphony No. 7 exudes rebelliousness. The treatment Dvořák’s homeland had received at the hands of the Austro-Hungarian Empire which ruled it, rankled the composer. The sunshine of Symphony No. 8, written in his farmhouse in the Czech countryside, clears the air after the storms of Symphony No. 7. Dvořák’s rural surroundings may have influenced the music’s freshness and cheer.

The Houston Symphony led by its Music Director Andrés Orozco-Estrada, recorded these symphonies at the Jesse H. Jones Hall for the Performing Arts in Houston, in April 2014 (Symphony No. 7) and March 2015 (Symphony No. 8).

It is understandable that PENTATONE would wish to mark the signing of their new star maestro Andrés Orozco-Estrada with a release to showcase his considerable musical and interpretive talents, so a coupling of two of Dvorak's most popular symphonies would therefore seem to be a good choice for this purpose. There is, however, the problem of the existing competition to consider. Currently on SACD alone there are no less than 12 versions of the Symphony No.7 in D minor and an astonishing 21 versions of the Symphony No.8 in G major, not to mention the many recommendable recordings on CD, while the current PENTATONE catalogue already boasts fine accounts of these two symphonies by the late Yakov Kreizberg and the Netherlands PO. Dvořák: Symphony No. 7 - Kreizberg and Dvořák: Symphony No. 8 - Kreizberg.

Having both symphonies on a single disc lasting 76'34” is certainly a plus point, but it is clear that any newcomer to an over-crowded catalogue needs to offer some illuminating point of view to warrant the attention of collectors.

As is the case with all great masterpieces these works invite differing interpretative stances from conductors. In both these symphonies Orozco-Estrada adopts a musical approach that is refreshingly straightforward and direct in manner with generally steady speeds – though he never lets the music drag or become ponderous – and with a warm expressiveness that allows Dvorak's music to speak for itself. Orozco-Estrada's middle-of-the-road accounts, that while never matching the urgency or electric intensity of say Manfred Honeck in his recent recording of the 8th Symphony, are unencumbered by mannerisms that can become irritating on repeated listening. Whether this is enough to trump the competition is for each listener to judge for themselves.

The Houston Symphony respond to their newly appointed Music director with unfailingly polished playing. Orchestral textures are satisfyingly rich with solid weighty brass, supple woodwind and keen strings all vividly captured in the splendidly rich 5.0 DSD recordings made by the capable team of Mark Donahue, John Newton and Dirk Sobotka.

The two symphonies on this SACD were recorded live a year apart (April 2014 for Symphony No. 7 and March 2015 for No. 8) at the Jesse H Jones Hall for the Performing Arts, Houston, Texas.

These scrupulously prepared and finally executed accounts of two of Dvorak's finest symphonies can be confidently recommended to those seeking this particular coupling even in what is clearly a very competitive field.

Recorded by Sound Mirror. Say no more! Sets it well above the merely routine.

A Curate's Egg indeed. There are aspects of these recordings that have tremendous appeal, superb musicianship and exemplary recording but there are also aspects of arrangement and orchestration that frustrate, such as many deliberate pauses that break rhythm and of the orchestra not being given its head when occasion demands as in the final movement of the 8th. One can easily sense the reigns being held taut where most allow the freedom for momentum to build. This is a quite deliberate choice by the conductor but it is hard to understand what is his take on these oh so-popular works that everyone has heard many times and of which most collectors will have recordings by the dozen. Maybe Orozco-Estrada wishes to set a different tone to these works from a uniquely different perspective of meaning that maybe he feels others have not sensed? If so it certainly doesn't work for me.

I found it immensely frustrating and for me the overall performances are spoiled. There is much in here that is good to listen too but at the end I felt perplexed and frustrated in equal measure. If you have Fischer, Macal or maybe even Kreizberg this is one you can afford to miss.

From my sampling I agree with hiredfox that these performances are rather restrained. I think Orozco-Estrada's technical approach is more effective in his recent Stravinsky recording (Stravinsky: L'oiseau de feu, Le Sacre du printemps - Orozco-Estrada, especially the Rite of Spring).

We must have reached the point of diminishing returns for recordings of core repertoire, unless it's expected that Houston Symphony patrons or fans of the conductor will buy these recordings in large numbers. New Tchaikovsky 6ths from Fischer and Honeck will presumably have the advantage of each maestro's somewhat indiosyncratic/highly personal interpretive stance, and, as Jared Sacks explained on another thread, Fischer's recordings sell. But really, with so much great music still unavailable on sacd do we need a 24th and 25th version of the Pathetique or 12th or 13th Dvorak? Among the several outstanding Dvoraks already in the sacd catalog my recommendation for the 7th and 8th would be Claus Peter Flor and the MPO on BIS, OAS coupled with tone poems. 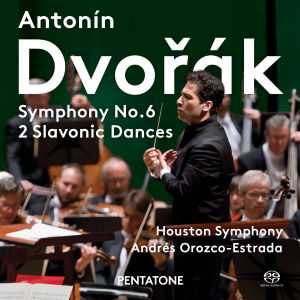 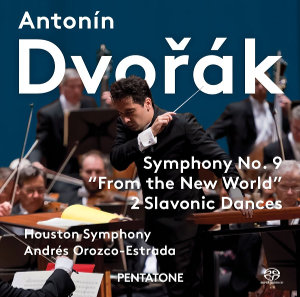