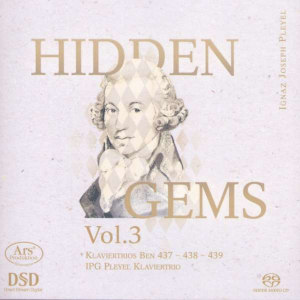 Ignace Pleyel was one of the more prolific composers of his time, churning out, over a period of around 10 years, an immense number of chamber music (often ‘remixed’ and then issued ‘as new’), symphonies and ditto concertantes. He was popular in his time. Very much so. No other music was played more often than his. No wonder, because his principal teacher was Joseph Haydn. Being a gifted pupil, he quickly learned and mastered the inns and outs on how to compose music that people of all walks of life really liked; mostly easy to play and certainly a joy to listen to. Although much of his legacy has remained excellent food for teaching purposes, he was soon forgotten when the romantic composers got the upper hand. Unlike Mozart and Haydn, Pleyel’s intrinsic compositional value was clearly not enough to withstand these developments.

Following recent revival tendencies and subsequent search to uncovering worthwhile contemporaries of Mozart, Haydn and even Beethoven, smaller labels like CPO and Naxos have shown, among other things, a growing interest in Pleyel, the real champion, however, being ARS-Produktion, with 17 volumes (plus one audio book) in their ‘Pleyel Edition’, all in RBCD. Unfortunately, they are not all of an even quality.

It would seem to me a condition sine qua non that reviving second tier composers best be done with first tier performers. For their series ‘Forgotten Treasures’ ARS-Produktion successfully collaborated with Michael-Alexander Willens and his Kölner Akademie in excellent form, which had no doubt a conclusive impact on the final result. For the new series, ‘Hidden Gems’, different talents have been selected, and recordings are, at least so far, exclusively devoted to Pleyel. They are, like the Pleyel Edition, once again edited in close cooperation with the Austrian ‘Internationale Pleyel Geselschaft’ (IPG).

The three trios in this 3rd volume not having been recorded before, are ‘World Premières’. The IPG Pleyel Klaviertrio is, as far as I have been able to establish, an occasional one, made up of members of other formations: Varvara Manukyan, piano / member of the Cuvilliés Trio, Munich; Cornelia Löscher, violin / currently concert master Lockenhauser Kammerorchester, and Arne Kircher, cello / member of the Goldberg and Janus Ensembles, Vienna. All playing period instruments; the piano being an original Pleyel and supposedly the one from the Ignaz Pleyel Museum in Ruppertsthal, Austria. Preparing for this recording they have given public performances in 2015 and will continue to do so this year. This explains their perfect coordination and enchanting musical presentation.

It’s a known fact that Pleyel’s piano trios do not demand excessive skills on the part of the musicians. They can devote all their talents and energy to phrasing and shaping the attractive melodies in these three wonderful pieces of ‘easy listening’, or should I respectfully say: “pleasant listening”. Because isn’t that what they were meant to be? And that is exactly what the IPG Pleyel Klaviertrio is doing so well for us: pleasing the listener.

With the present series ARS-Produktion is doing the Hi-Res Community a huge service, and so is the IPG President, Adolf Ehrentraud, with his detailed essays on (1) Pleyel and (2) Pleyel’s piano trios in the liner notes. It will not make Pleyel a more prominent composer than he is, but it certainly fills a gap in the catalogue and completes at least my knowledge about this naturalized French composer, becoming later on in his sort of second, more businesslike life, the much better known founder of the famous ‘Pleyel Piano Manufacturing Plant’ in Paris.

I have not heard the previous two issues, but this one gives me confidence that ARS-Produktion has opened up another rewarding vault of forgotten and ready to be rediscovered delicacies for the ear and the mind. May we look forward to further installments? 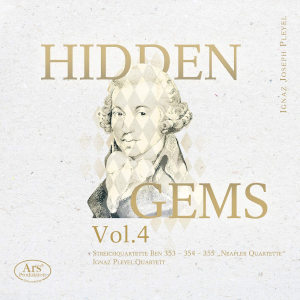