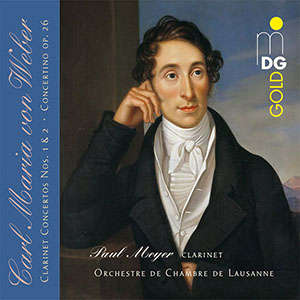 
Clarinet Friendship
The highly productive musical friendship between Carl Maria von Weber and Heinrich Baermann is legendary. The Concertino penned by Weber especially for the first clarinettist of the Munich Court Orchestra got things going with its sensational success. Weber and Baermann then went on an extended joint concert tour with the two clarinet concertos written shortly thereafter. Baermann, a master of fingering and tonguing, often preferred the virtuosic Concerto in E flat major to its more mysterious sister work in F minor – which may have pained the “romantic” Weber but did not at all harm their warm friendship. Paul Meyer probes this friendship with the Orchestre de Chambre de Lausanne, which once again proves to be a top international advocate of German romanticism.

Financial Crisis
Weber needed only a few days to compose the Concertino. The composer fully exploited the resources of the Munich Court Orchestra, one of Europe’s best even after its move from Mannheim. The one-movement work has the form of a bravura opera scene with ample space for the clarinettist to display his brilliance. It is difficult to say who was more enthusiastic, the soloist, the public, or the orchestra musicians. In any case, several commissions for concertos were the result, and they eased Weber’s personal financial crisis, enabling him to compose in more comfortable circumstances.

Romantic Magic
Working in close association with Baermann, Weber set out to compose the two clarinet concertos. The King of Bavaria himself had commissioned them – further proof of the extraordinary esteem in which Weber was held in Munich. Already the beginning of the Concerto in F minor enables us to understand this hype: in a mysterious pianissimo the cellos and basses present a theme full of Freischütz romantic magic suddenly interrupted by a fortissimo chord involving the whole orchestra. The ensuing tutti sets the stage for the soloist’s complete palette of the finest tone colours and individual expressive capabilities.

Resourceful Musicianship
Paul Meyer fully develops these resources. It almost goes without saying that this sought-after soloist and conductor masters the most highly demanding technical challenges, including the feared solo beginning of the Concerto in E flat major over three octaves, without any problems at all. Moreover, his design of a fairy-tale narrative with the Lausanne musicians creates a sensation while transcending mere virtuosity. Captured with high-resolution SACD technology, this new recording not only is convincing in every respect but also – in 3-D and 2+2+2 Recording – produces an emotional suction effect guaranteed to move each and every listener.