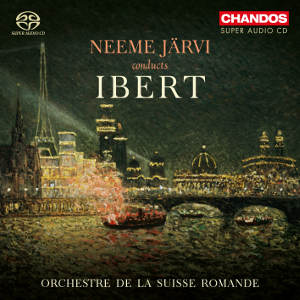 
Neeme Järvi and the OSR continue their exploration of French orchestral music with this fourth album: a merry collection from the best of the vigorously ebullient music of Jacques Ibert.

Among the numerous winners of the famous Prix de Rome between its institution by Napoleon in 1803 and its abandonment in 1968, the twentieth century provides us with repertoire works from only one composer: Jacques Ibert, whose characteristically clear orchestration is emphasised by strong melodic lines and supported by lively ostinato patterns in the bass. At the same time, the album reveals what an eclectic composer Ibert was. The contrast between his two best-known pieces is a perfect example: Divertissement, for small orchestra, is light-hearted, even frivolous; Escales..., on the other hand, is a ripely romantic work for large orchestra.

Like the previous recordings in this series, the unique acoustic of Geneva’s Victoria Hall is perfectly captured in surround sound on this SACD.

This new survey from Chandos of the instantly appealing and inventive orchestral music of Jacques Ibert (1890-1962), delivered here in high resolution multichannel sound, will be welcomed by those who have enjoyed Neeme Järvi's four previous companion discs for this label of works by Massenet, Chabrier, Offenbach and Saint-Säens.

On this vividly recorded SACD, Järvi and the Orchestre de la Suisse Romande perform a varied selection of eight of the composer's works written between 1922 to 1956, some of which are rarely heard in the concert hall. Naturally the disc does include Ibert's two most popular works – the riotously irreverent 'Divertissement' that he re-worked from his incidental music for Eugène Labiche's farce 'The Italian Straw Hat', and the colourful 'Escales' ( Ports of Call) inspired by impressions of the Mediterranean ports of Palermo, Tunis-Nefta and Valencia.

Like the 'Divertissement', Ibert's 'Suite Symphonique 'Paris'' is scored for a chamber orchestra and also began life as incidental music for a play –'Donogoo-Tonka by Jules Romains. These six 'scenes parisiennes', as Ibert subtitled them, provide snapshots of life in the city of his birth from a vivid depiction of the métro in early morning to dancing at the Restaurant au Bois be Boulogne.

The less familiar 'Ouverture de fête' was one of the works commissioned in1940 by the Japanese government to celebrate the 2600th anniversary of the founding of the Japanese empire. Among the leading composers of the time accepting this task were Richard Strauss and Benjamin Britten (whose Sinfonia da Requiem was famously rejected for, amongst other things, its Christian sentiments). Ibert's thrilling piece is delivered with tremendous panache by Järvi and his orchestra – the performance of the joyous outer sections well contrasted with the richly melodious slower central section.

Ibert also wrote a considerable body of film music and the brief but magical 'Sarabande pour Dulcinée' from Georg Pabst's 1933 film 'Don Quichotte' is one of the many delights also included in this programme.

The OSR perform each of these works with their customary refinement and élan. The shimmering opening of the first movement of 'Escales' typifies the luminosity of the playing and Järvi is attuned to the sudden changes of mood that characterise many of Ibert's compositions. Occasionally there are passages where the conductor's penchant for hectic tempi misfires and the wit and charm of the music is short changed, the 'Valse' movement of the 'Divertissement' being one example in a performance that otherwise possesses all the knockabout fun for which one could reasonably ask. The show-stopping 'Bacchanale (1956), an improbable commission from the BBC to celebrate the 10th anniversary of their Third Programme (now called Radio 3), would also have benefited from a slightly less frenetic pace. Overall though there is very little to complain about and much to enjoy.

Ibert's kaleidoscopic orchestration deserves the finest recorded sound and it definitely receives it here. Ralph Couzens's engineering has yielded a beautifully open and spacious recording with a wide dynamic range and excellent balances that does full justice to the scintillating orchestral playing and the fine acoustic of the Victoria Hall, Geneva.

Informative liner notes from Roger Nichols and a very generous playing time of 82.15 make this delectable disc a winner.