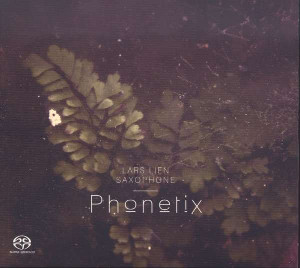 “Phonetix” is Lars Lien’s first solo release on the LAWO Classics label. The driving force behind the project is Lien’s interest in exploring the saxophone’s vocal capacity, with music and texts touching on universal and existential questions.

Fifteen years ago saxophonist Lars Lien and soprano Siri Torjesen began their collaboration with a performance of the work “Sister Song”. The music was composed by Håkon Berge and the text written by Paal-Helge Haugen. This first performance of the work took place in a forest setting in Olavsdalen outside Kristiansand. In Lien’s words: "Already at that time I understood the many similarities between the saxophone and the human voice. Timbre, vibrato, dynamic tension and flexibility are all qualities shared by a singer and a saxophonist."

Soprano Berit Norbakken Solset and Lien are both enthusiastic about the music of Swedish composer Karin Rehnqvist. The unpolished, almost naked quality of her musical expression rooted in Swedish traditional music produces fascinating and distinctive results. The recording features altogether three works of Rehnqvist, together with specially written works by Mark Adderley and Lars Skoglund, and the magnificent “Contrapunctus” by Bjørn Kruse. The singers Torjesen and Solset are joined on the album by organist Anders Eidsten Dahl and percussionist Teodor Berg.

Norway's LAWO Classics, apart from concentrating on well-known music from the seventeenth to twentieth centuries in HD, are to be praised for their occasional issues of modern and post-modern origin, helping to show that contemporary music is still alive. This new issue, "Phonetix" ("Sound Picture") features experimental work with the saxophone by Lars Lien, author of a new Norwegian performance tradition for the saxophone, who stares out of his photograph in the disc's booklet with intense concentration and dedication.

On this disc, Lien explores the saxophone's vocal capacity (many think that the saxophone is the instrument closest to the human voice), using his Buescher Aristocrat sax from 1936, constructed to the acoustic specifications of Adolphe Sax himself, 100 years earlier. There are 7 tracks, each a form of chamber music featuring one of the two sopranos or a mezzo-soprano together with an alto sax. There is also often additions of often unusual percussion (in "Hallucinations" and "Haikus Before Sleep"), while "Contrapunctus" uses the organ of Bragen Church, Drammen. Lien's intention is to treat the voice and saxophone as "equals, each playing with the other tonally and contrapunctually". Most of the pieces were constructed by post-modern composers (Norwegian, Swedish and two from England) and their text writers to provide material (sound pictures) demonstrating Lien's views of the interactions of female voices with sounds from the saxophone.

A clue about the demeanour of this SACD from Norway's LAWO Classics is clearly shown in the artwork of its cover and booklet. A deep sepia background shows close-up photographs of an old mansion, ruined and decayed, including a vase full of fern fronds whose foliage looks now almost lacking colour. Dust and scratches added to the pictures confirm the signature of desolation. The dark atmosphere pervades in this SACD's musical and textual programme from its first moments, where we are startled by a soprano with an alto saxophone with high-pitched voices interlacing in what is close to a desperate cream. With slight differences in tuning, the voice and sax here produce acoustic beats which set up uncomfortable vibrations in my ears, un-nerving but saluting LAWO's superb DSD recording, which is intimate despite being in a church. The disk's wide dynamic range includes very soft whispering from a soprano, so you need a very quiet listening room to pick up the articulation.

Norwegian composer Dagfinn Koch writes a commentary on the musical pieces; it is partly a philosophical review of the post-modern idiom, peppered with dozens of unanswered questions. If your musical tastes extend to post-modernism, you will approve of statements about the composers aiding Lien on this SACD, such as "They reveal courage and humility for daring to feel fear, sorrow, resignation, desperation, loss and absence". Such emotions do permeate Lien's programme, and while I have respect for the place of the many species of musical post-modern in musical history, I must confess that I get tired by works with continuous heavy dissonance, lack of melody and happiness or light of any kind.

Some of the interesting 'Sister Song', track 4, music by Håkon Berge, text Paal-Helgi Hougen, refers to Norway's great Wagnerian soprano Kirsten Flagstad, but not celebrating the diva, rather the anguish of her suffering the death of her 16 years husband, Henry Johansen, on his death in October 1946. This piece follows one of the common tendencies of post-modern style; inclusion of quotations of or references to music. In the case of Sister Song, quotations include extracts from Lohengrin, Tristan & Isolde, Die Walküre and a letter from conductor Wilhelm Furtwänger.

Track 6, Contrapunctus for mezzo-soprano, alto saxophone and large organ is also of interest because of its constitution. The rich warmth and deep pedal bass of the organ suddenly gives a real warmth to the disk. Solos by the sax are matched by strange down-swooping by the mezzo, and the quoted material is from a hymn.

Performances all seem to be very good, although it was difficult for me to judge, given the odd noises, to which sopranos were sometimes allotted. The singers use relatively "white" tone colours and have very good articulation, both in Norwegian and English. Lien's skill as a saxophonist is obvious everywhere, especially his breath control in long slow passages. LAWO's recordings were at their best, and the atmospheric booklet, as noted above, has plenty of information in Norwegian and English, with all texts in both languages. Clearly "Phonetix", the name made up from the Greek by Lien is a experimental disk for a smallish minority, including saxophonists. If you are looking for melody and warm harmonies, look elsewhere. The final question: can the alto-saxophone make a sound like a soprano? Yes. Sometimes.