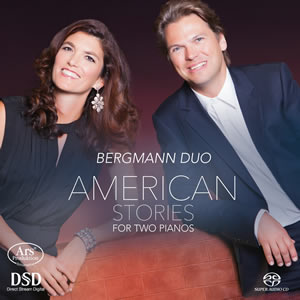 Classical or not classical? That is the question.

Whatever category I choose, some members will, and rightly so, question my choice. The major work on this disk, ‘Selections from West Side Story’ by Leonard Bernstein, qualifies for some as classical, but may by others rather be catalogued as ‘musical’. The two pieces of Astor Piazolla fall, to a certain extent, in the classical bracket. Chick Corea and Pat Matheny come from the Jazz scene, but Corea’s ‘Spain’ is partly taken from Rodrigo’s ‘Concierto de Aranjues’. Egberto Gismonti is more a kind of in between. Might we say, therefore, that we have here a typical case of ‘cross over’? Confirmation can be drawn from the male duo partner and arranger’s web site: “Bergmann writes in a uniquely original voice that straddles the best of the classical and jazz worlds”. And as a composer he “fuses a variety of stylistic influences- ranging from minimalism and 20th century avant-garde to jazz, pop and world music into his own distinct musical language”. However, ‘Cross over’ not being on the menu, I finally classified it under ‘classical’; taking into account the degree of ‘seriousness’ with which these arrangements have been handled.

I have, with one exception, little to say about the way these two, Mr. and Mrs. Bergmann, are playing, other than that they can at least match many other eminent piano duos. Their trade is clearly based on a thorough musical education and mutual respect. They differ, however, from other classical duos in that they present a more daring and innovative programme. All the arrangements have been confectioned by Marcel Bergmann over the past years and the West Side ‘suite’ has, with the exception of the new tracks 4 and 5, been recorded before on two different occasions : the Aktos label (“Tableaux” 2001; tracks 3,8,10,12,13) and, with the then still Ms. Elizabeth Laich, on the Cord Aria label (“Elizabeth Laich & Marcel Bergmann - Piano Duo” 1997; tracks 6,7,9,11,14). Track 19, ‘Infancia’ is new as well

While their rendition of the jazzy West Side arrangements is amazingly well done, question remains whether one likes it like this or rather give preference to its original, orchestral scoring. This being a matter of personal taste, there is no doubt that the demand for piano duos with two pianos is there and that Bergmann & Co deliver excellent catering services in this domain, of which another fine and breathtaking example is given in Metheny’s ‘ostinato’ drive in ‘Eighteen’.

I’m somewhat less enthusiast about the Latin-like credentials of this Duo. I can’t say that it is not well done, but I feel that in ‘La Fiesta’ something is missing. The typical rhythm falls short, or rather, comes out a trifle too rigid and irregular for the hips to move along. ‘Infancia’ suffers from a similar rigidity.

However, these are minor quibbles for a disk that will satisfy many lovers of this kind of engaging and catching pianos ‘in super-dual-stereo-mode’, with West Side as superb centerpiece and a very movingly played ‘Oblivion’ from Astor Piazolla.

The piano sound is realistic, as could have been expected from ARS-Produktion.