Does this SACD sound airless, shallow, highly compressed, and too loud?

“Mr. Hara also cares about sound quality. Although there is some controversy surrounding the "loudness" of CDs, his signature 24-bit mastering process, dubbed "Hyper Magnum Sound," produces very powerful sound with strong presence, which is adored by many audiophiles.”

Listeners who know how detailed, expressive and holographic a well-engineered and mastered SACD of acoustic jazz can sound would not regard this SACD's sonics as magnum, hyper or otherwise. Mastering a final mix at 6dB higher than the industry standard could fool some people into thinking that they’re hearing a “very powerful sound with strong presence”. But SACD collectors favor good quality amplifiers and loudspeakers or headphones; why does Mr. Hara think we need the hyper-volume of a Venus SACD? The virtues of SACD playback for two-channel jazz recordings are wide dynamic range and deep soundstage, assuming a ‘live’ room was used in the original recording. Compression and volume boosting defeats the whole purpose of the SACD medium.

Most of the hundreds of Venus SACDs are reissues of albums originally recorded and mastered for release as RBCDs, so perhaps an explanation for the sound quality of this SACD is that the final CD mix — with Venus' signature hyper-compression and hyper-volume boost — was transferred straight to DSD.

“Renaissance” is a well-executed set of standards, many of which are associated with Miles Davis (“My Funny Valentine”, “Fran Dance”, “Dear Old Stockholm”, It Ain’t Necessarily So”). With better remastering, this 2002 recording session might have been salvaged, but Rava’s trumpet and flugelhorn, normally so expressive, are level-compressed to the point where he seems to attack every note exactly the same. Excessive use of digital reverb further blunts his tone coloration. The piano sounds brittle, the bass unnaturally loud, and the cymbals hyper-processed, a wash of noise. It’s a sonic mess, a disservice to the artists and to the listeners.

Sound issues aside, “Renaissance” is a less interesting album than Rava’s 2004 ECM release “Easy Living” or the 2003 CamJazz CD “Full of Life”, both of which feature excellent engineering and mastering that easily surpass the Venus SACD in sound quality.

For an example of an uncompressed, spacious-sounding studio recording on SACD of the same trumpet-piano-bass-drums quartet configuration, listen to Enzo Pietropaoli Quartet: YATRA Vol. 3, which Fonè producer-engineer Giulio Cesare Ricci remastered to DSD from hi-res PCM masters. You don't need golden ears or a state-of-the-art audio system to hear the difference.

If you’re a jazz lover and an audiophile, you owe it to yourself not only to support the labels that produce reissue jazz SACDs with high fidelity to the original recordings, such as Mobile Fidelity, Analogue Productions, Vocalion, Tower Japan and Universal Japan, but to patronize independent labels that record living artists, such as Fonè and Songlines.

Although few recently-recorded jazz albums other than the Venus back catalogue are being issued on SACD, there are many excellent and groundbreaking new jazz albums by respected artists being released as hi-res downloads, on vendor sites, and on the artist-supporting platform Bandcamp.

I think your comments about the sonics of most, if not all, Venus recordings are on target. It's a pity, because the label has recorded a number of excellent artists, some with great frequency. I can think of some Venus albums I'd hate to do without, but the post-production shenanigans are ultimately a distraction that set back the music.

SteelyTom: You've confirmed my suspicion that Venus consistently overuses compression and volume boost. Why else would the distributor make a point of mentioning the controversy over loudness?

To be fair, the label does provide income, and exposure to the Japanese market, for artists like Nicki Parrott, Steve Kuhn, Ken Peplowski and others on their roster. Many Venus SACDs were favorably reviewed by sa-cd.net users. 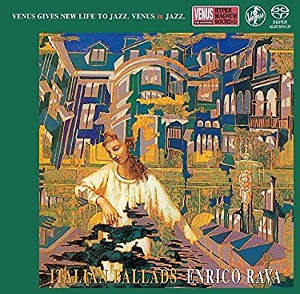