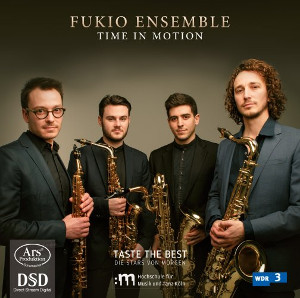 When the Belgian born Adolphe Sax invented the saxophone he had classical music in mind. Little did he suspect that the jazz scene would embrace it so avidly that many believe that this instrument is uniquely connected to jazz, with such eminent Jazz saxophonists like Charlie Parker, John Coltrane, Stan Getz and Jimmy Giuffre, as its principal icons. This disk proves otherwise.

The fact that Adolphe Sax moved from the small Belgian provincial town of Dinant to the Big Musical World in Paris, France, where he registered his invention and widened its scope into a family of no less than 7 instruments, must have inspired contemporary French classical composers to write for the saxophone. Claude Debussy, Jacques Ibert, Darius Milhaud, Florent Schmitt and Henri Tomasi all did. But it didn’t stop there. Elsewhere, composers like Heitor Villa-Lobos, Alexander Glazunov, and more recently: Gunther Schuller, Alan Hovhaness, John Adams and Kalevi Aho, experimented with the new sound possibilities, mostly composing for saxophone and orchestra. For chamber music the harvest is, up till now, more restricted, but for saxophone quartets, having gained in popularity in recent years, a fair number of compositions (of variably quality) are available, too. Some are for a combination of Saxophone quartet and concert band -or orchestra- (Glass and Aho), though mostly for quartet only (Glazunov, Schmitt and Pierné).

So, why then seek refuge in transcriptions or arrangements, as some do? For one thing: there is, obviously, no repertoire from the period before the saxophone was invented (around 1842); for another: because not all contemporary compositions will satisfy the consumer at large. Finally: repertoire requires variety as well.

In volume 3 of the series ‘Taste the Best, Die Stars von Morgen’ (tomorrow’s stars) ARS-Produktion brings us a comprehensive recital of the Fukio Ensemble, winners of the 2014 ‘Mendelssohn-Bartholdy Conservatory Competition’. The winning compositions: ‘Towards the Door we never opened’ of Fabien Lévy and Robin Hoffmann’s ‘Der blutige Schaffner’ (The Bloodstained Ticket Inspector) are remarkable, even extreme in conception and will not suit everyone’s taste. Fabian Lévy is an outright modern music experimenter, whereas Hoffmann even goes a step further in his ‘Entgleisung’ (derailment) by letting the players use their instruments as rhythmic utensils, simulating a train and what happens to it. It’s pretty weird, testing the limits of music bordering plain and, towards the end, loud ‘noise’. What both pieces do, however, is to show what’s sonically possible while allowing all four members of the Ensemble to demonstrate their phenomenal technical skills and musical ‘guts’.

The start and conclusion of the recital is, I think, carefully chosen well-known music to sooth the ear: A transcription of Dvorak’s famous String Quartet No. 12 ‘The American’ and an arrangement of Manuel de Falla’s ‘Spanish Dance’ from his opera “La Vida Brève”. Both adaptations have been done by the members of the Fukio Ensemble, whereby the latter work asked for solving the additional difficulty of telescoping the various orchestral parts into 4 saxophone parts without losing the intrinsic value. I find the result quite rewarding, but the question here is: ”Can such arrangements replace the original”? Probably not; but it would seem that for saxophonists such a consideration is irrelevant, if only because there is no other way to expand their repertoire.

The center-piece of the recording ‘Ciudades for Saxophone Quartet’ is special in that nothing is what it seems. The composer is not as Spanish as his name, Guillermo Lago, would suggest. It’s a ‘nom de plume’ of the Dutch composer and baritone saxophonist Willem van Merwijk. Furthermore, his Ciudades, musically depicting different cities in the world, is not a finished product; it’s a ‘work in progress’. New cities can and will be added in future. As played here, is where it now stands. Finally, it is not exclusively composed for a saxophone quartet. According to van Merwijk’s web site: “At the request of the NDR Big Band and the Amstel Quartet Lago made versions of Addis Ababa and Córdoba for big band and saxophone quartet … For the International Saxophone Week 2012 at Amsterdam Conservatorium Lago also made versions of Montevideo and Addis Ababa for soprano sax, baritone sax and piano. At the request of the NAKK (Nieuw Amsterdam Klarinet Kwartet/New Amsterdam Clarinet Quartet) Lago made versions for clarinet quartet of all Ciudades (Eb, Bb, bassethorn/2nd Bb, basscl)”.

Does it matter? Not really. Lago’s music is food for true saxophone lovers. It might have well been named: ‘Saxophonists at Work’. We are here on ‘solid’ modern grounds, requiring exact interplay and perfectly balanced sonority of the four instruments: the soprano, alto, tenor and baritone sax, respectively played by Joaquín Sáez Belmonte, Xavier Larsson Paez, José Manuel Bañuls Marcos and Xabier Casal Ares. All four from Spain. In less competent hands the music easily risks losing its focus and, for that matter, the listener’s attention. Not so here.

This performance confirms that these four stand at the beginning of what promises to become a brilliant career and I’m sure that no saxophone player will want to miss this recital as a proof of what can be done with these instruments. For other music lovers it will surely widen their musical scope, but they may want to sample before buying.

Daniel Knaack’s comprehensive liner notes give much detailed information and the sound is, as usual with the Schumachers, beyond reproach.

Great review, Adrian. As you write, there are very few saxophone quartet recordings in hi-res. The category is a bit larger if you include woodwind small ensembles, but it's still a niche of classical chamber music. The New Century Saxophone Quartet's Die Kunst der Fuge (Bach: Die Kunst der Fuge - New Century Saxophone Quartet) is a fabulous quality performance and recording. Conservatory-trained saxophonists like the New Century and Fukio Ensemble can produce a wide range of tone colors from their instruments, much like string players. I look forward to hearing the reviewed disc.