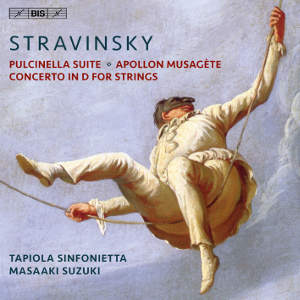 
Masaaki Suzuki is firmly established as a leading authority on the works of Bach, both in his capacity as director of the Bach Collegium Japan and as an organist and harpsichordist. In recent years he has also been appearing in front of eminent orchestras worldwide, however, conducting repertoire as diverse as Britten, Fauré or Mahler. For his first recording of 20th century repertoire, Suzuki has chosen to collaborate with the acclaimed Tapiola Sinfonietta in an all-Stravinsky programme.

The disc begins with the music for Pulcinella – here in the concert suite devised by the composer – which Stravinsky later described as ‘the epiphany through which the whole of my later work became possible’. Pulcinella was commissioned in 1919 by the Ballets Russes, for which Stravinsky had already written The Firebird, Petrushka and The Rite of Spring. For this adaptation of an early eighteenth-century commedia dell'arte libretto, he based his score on existing music, initially ascribed to Pergolesi although material by other baroque composers is also included. Stravinsky’s approach is never that of a faithful transcriber, however: in Pulcinella the material is slanted harmonically, rhythmically and texturally in a manner reminiscent of cubism – and it was indeed Picasso who provided the decor and costumes for the ballet's first performance.

The neoclassical (or neobaroque) spirit remained a vital part of Stravinsky’s compositional armoury for a long time, and also informs the other two works presented here. The formal design of Concerto in D, composed some 25 years after Pulcinella, pays homage to the baroque concerti grossi of Vivaldi and Bach, while the score for the ballet Apollon musagète (also known as Apollo) contains references to French music from the 17th- and 18th-century – but there are also echoes of Tchaikovskian lushness in the work which is richly scored for a string orchestra which is often subdivided, and with many distinctions between solo and tutti lines.

This BIS issue gets off to a great start. Many classical record collectors will know of Masaaki Suzuki and his dedicated series of Bach's Cantatas with his Bach Collegium Japan. Suzuki's series covered both sacred and secular types, these mostly being recorded in SACD surround format. Like me, these collectors will be intrigued to hear that in recent years Suzuki has been extending his masterly conductorial skills with concerts played by well-known orchestras in Europe and North America, developing a new repertoire including Stravinsky, Britten, Poulenc and even Mahler. I have read glowing reviews from these venues. Not surprisingly, the first recording from Masaaki's new realm is now published - by BIS.

Suzuki chooses the well-known Tapiola Sinfonietta from Finland for this programme of Stravinsky's neo-classical works requiring a chamber orchestra. The Sinfonietta was founded in 1987, with a specialization in Viennese-Classical repertoire; just right for this programme of two suites from Stravinsky's ballets and the Concerto for Strings in D. The orchestral compliment consists of Strings 8-7-5-4-3, Flute 2, Oboe 2, Bassoon 2, Horn 2, Trumpet 2 and Trombone 1 - in other words, a standard Classical band, which would be familiar to Mozart or Beethoven.

Stravinsky, working in Paris during the 1920's when the neo-classical style was highly favoured by European composers, produced his ballet 'Pulchinella' (1919) with material which he thought was by the Baroque Italian Pergolesi. However, these tunes subsequently proved to be by other, non-famous, Italian composers. Nevertheless, he proclaimed his music for the ballet to be "my discovery of the past". In 1924, he extended the success of the ballet, based on an 18th-century play, where Pulcinella is a character, originating from an age-old Italian 'Commedia dell'arte', into a 9 part musical suite. The 1949 version is used by Suzuki.

Listening to Stravinsky's own recording of Puchinella with the Columbia Symphony Orchestra (from mid-1960's), he is rhythmically taut, moderate in tempo and clear but not lingering with his melodies. Suzuki's tempi are mostly close to Stravinski's, buteven with the difference only in seconds, Suzuki is faster. Rhythmically, Suzuki is more subtle and varied, using his intimate knowledge of Baroque suites, and introducing more playfulness and satire, which Stravinsky only hinted at. Adding to this fresh-sounding, energetic approach, Suzuki encourages the Sinfonietta to make their sound more colourful and warmer by careful voicing in chords. He also opens up the melodies by superbly balancing the inner voices (on his discs, Stravinsky's melodies are merely played above less obvious underlying accompaniment).

Suzuki also characterizes the mainly terpsichorian movements in a subtle, lyrical way; the Serenata gently and softly holds a rocking pulse in its 3/4 time rhythm with dry plucks on the strings, while a delicately fashioned oboe tune floats above. The Vivo grabs you and shakes you with its boysterous trombone and basses, to be followed in contrast with the soothing Minuetto, for once slower at 2'22 than Stravinsky's 2'07.

Apollon musagète (1928, rev. 1947) is treated much the same way, but only for strings. Stravinsky conceived Apollo as a ballet blanc – a "white ballet", with classical choreography and almost monochromatic attire. Upon first hearing Apollo, Diaghilev found it to be "music somehow not of this world, but from somewhere else above." It seems that Suzuki was striving to emulate this; again the immediate feeling is of freshness and warmth, but now somehow aloof and grave. Many textures for strings support the slower tempi of this music rather than the range of dynamics found in Pulchinella, with the touching reappearance of the Prologue's deeply-felt segment in the final Apotheosis.

Of this programme triplet, Stravinsky's Concerto in D for string orchestra is the younger, originating from 1946-8. It is classically structured, with the usually three movements, Vivace, Arioso (Andantino) and Rondo (Allegro). Without a soloist, the work still demands many virtuoso episodes to challenge the strings. Suzuki cleanly balances the work's combination of classical and 20th century modernism via Stravinsky's quirky methods, rather than following remarks by Stravinsky scholar Roman Vlad who found the Concerto in D "a light, vivacious work, . . . in the nature of pure entertainment or even escapism. The musical discourse trips along with gay, carefree lilt." However, another musicologist, Jerome Robbins, remarked on the concerto's jabbing accents and heady velocity, which turned it into a grim and violent ballet, "The Cage." With Suzuki conducting, the internal details as mentioned above, together with restrained lyricism but strongly encouraged rhythmics, gave an exhilarating experience from the obviously deeply involved Sinfonietta strings. Suzuki even makes hints at Jazz at certain points, which seems absolutely appropriate.

Those are my remarks about performance, but there is another essential element in this Stravinsky album. The expansive Tapiola Concert Hall, at Espoo Cultural Centre, Finland is the venue. Aalto University researchers in Finland recently found that the emotional impact experienced by music listeners depends on the concert hall’s acoustics (see below). Within seconds of listening in 5.0 surround sound to this SACD, I was captivated by the sound of the Tapiola Sinfonietta in the Hall; first, its warmth, produced by additive reverberation amplification of low mid to bass tones, whereas in many other venues such lower notes are partially absorbed and thus the basses do not produce their real dynamics on disc.

Take5 Music Production were called in by BIS for production and engineering, and a splendid job they have done. Microphones and musicians appear to be placed optimally in the large hall with its plentiful reverberation. They have managed to provide a recording which is expansive, yet intimate in detail. The focus of the orchestra's deployment is unusually clear; horns at the back of the orchestra sound wonderful in their space, the players suggesting various distances, and the full overtones of the trumpets at full blast are thrilling. The clarity, detailed and full dynamics of the double basses and cellos underpinning the sound is a revelation, emphasising Stravinsky's important and unusual orchestration for the basses. At times the output of bass in massive chords or Stravinsky jabs become impressive towers of full tone, even for a small orchestra. I had no doubt that this fine recording did strongly affect my emotions, making listening to this recording a unique performance compared to the many other recorded issues of the same programme.

I have no hesitation in recommending the use of surround sound here; switching backwards and forwards between 5.0 and stereo revealed a notable drop in the ambience, and thus the strength of the lower instruments. However, stereo was able to maintain much of the orchestra's disposition, include the divided violins left and right.

Can a maestro of Baroque choral, organ and harpsichord such as Masaaki Suzuki move into the standard repertoire of C20th music? Yes indeed!