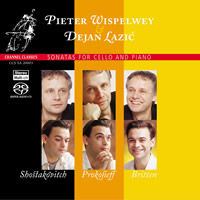 This is a tryptich of great 20th cello sonatas played in overtly romantic accounts from Wispelwey and Lazic on a superbly engineered Channel Classics disc. As with their Beethoven accounts (Beethoven: 5 Cello Sonatas - Wispelwey, Lazic), the balance is excellent and arguably could not be bettered; the multi-channel layer adds an acoustic realism that few chamber discs come close to matching. In particular, the piano is very well caught both in terms of image and tone, likewise is Wispelwey's cello.

The Shostakovich sonata of 1934 vintage comes first and in the opening expansive Allegro non troppo, Wispelwey and Lazic find a perfect tempo that balances the expressive elements with the more urgent episodes. In the Allegro that follows, the players find impish touches within the kaleidoscopic colours and the more passionate musical frame. Following this outward display of virtuosity, the Largo prompts much soul-searching from Wispelwey who is somberly accompanied by Lazic. The concluding Allegro contains more impish playing at the opening before whipping a storm, which Lazic in particular copes enormously well with the fiendish demands made by Shostakovich. Both players sound as though they are having fun - and so did I.

Next comes the Prokofiev sonata from 1949 whose finale has an opening theme strikingly reminiscent of the finale of the fifth symphony and it is well thought out and passionately played here. In the opening Andante grave, Wispelwey and Lazic play with great tenderness and passion by equal measure and unify episodes that I have heard lesser musicians play as disparate fragments. The Moderato is highly rhythmic in outlook (not that it doesn't have nice melodies) and Lazic relishes the interplay with Wispelwey. Any dissonances that are in the score are played with such assuredness that the ear does not readily associate them as a "clash".

Finally we have the Britten sonata from 1960 (around the time of composition of the superb War Requiem) in an account that almost matches the classic Rostropovich/Britten account. This five movement sonata is perhaps the musically most contrasted piece on the disc and is certainly a musical bedfellow of the Russian masters. This is quite captivating music and music making with both musicians making the most of the notes on paper and reading very well in between them too! As with the other sonatas on this disc, both cellist and pianist sound as though they are really enjoying making music together. The only one slight problem this account has is the Rostropovich/Britten collaboration - they find just that little bit more in the Elegia but this should not deter anyone from purchasing as I am being very fussy in that conclusion.