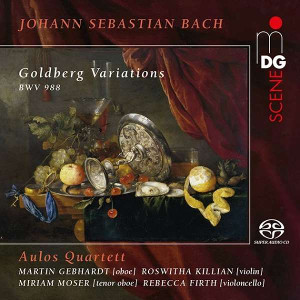 
Added Value
Even the very first printed editions of Bach’s incomparable Goldberg Variations contained arrangements for ensembles of melody instruments. The reason behind this is obvious: Bach’s complex part texture, designed for a keyboard instrument with two manuals, cannot be realized without further ado on the piano and can only with difficulty be grasped by the listener. The Aulos Quartet has recorded a new version of Josef Rheinberger’s arrangement that grabs and keeps our listening attention for two good reasons: the ideal transparency created by the mixed ensemble of strings and winds and the employment of the oboe profonda, a rarely heard instrument enormously expanding the tonal resources of the oboe family.

Instrumental Version
The musicians of the Aulos Quartet have based their arrangement on the version produced by Rheinberger for two pianos more than a hundred years ago. Rheinberger succeeded in bringing to the surface hidden polyphonic structures by means of an extremely skilful assignment of the parts to two pianos. This is a perfect point of departure: the oboe and violin play the treble, the oboe profonda takes charge of the tenor part, and the violoncello supplies the bass. As a result, similar sound colours never cross paths – thus guaranteeing massive gains for transparency.

Intrepid Virtuosity
And what a plenty there is indeed to hear: the minuet, sarabande, and polonaise form a three-layer aria; canons of the highest art challenge the performers and listeners with their progressive intervals in the upper voices. In the quodlibet two songs of folk character are added to the bass theme, and it is only in retrospect that we become aware of the fact that one of the songs had previously found repeated use in little particles. It is not without reason that this work is regarded as a great achievement in the art of composition.

Audio Veracity
The rewarding arrangement by the Swiss ensemble also brings out many a previously unnoticed detail even for seasoned listeners. According to the legend, Imperial Count Keyserlingk instructed Johann Gottlieb Goldberg, a harpsichordist traveling in his retinue, to perform from these variations when the count suffered from insomnia during the night. It can hardly be imagined that this art-loving man would have fallen asleep during such brilliant entertainment. All historical considerations aside, listening to this SACD produced with top technology as a 2+2+2 recording makes for true pleasure.