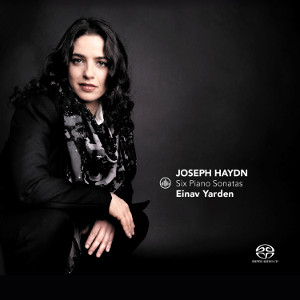 
The six keyboard sonatas selected for this CD are taken from Haydn’s middle period, all written between 1773-1776 when he was loyally at the service of Prince Nikolaus Esterházy (and to whom three of the sonatas are dedicated). Even in the context of the vast development and change in his style in 60 years of composition – moving from the early Classical period and Style Galant, through the Empfindsamkeit and C.P.E Bach’s influence, to establishing and refining what is now the essence of “The Classical Style” - Haydn displays in a short period of 3 years an astonishing diversity of compositional techniques, modes of expression, style and characters. Most of the six selected sonatas are also quite rarely heard on the concert stage, have not been recorded often, and surprisingly, few pianists have been exposed to them. This CD sheds light on some of those wonderful ‘neglected’ sonatas, as well as aims at contributing to the growing revival of interest in Haydn’s genius as a keyboard composer.

Re­creating a 1770’s Sonata requires not just an automatic follower of direction signs, but a truly accomplished player. That is to say an imaginative, cultured, sensitive, and genuine musician who is an active participant in revealing the music’s structure, deep meaning and manifold beauty.

For many Haydn is known for his prolific symphonic output, but he is so much more than that. His chamber music (string quartets and piano trios) are amongst the very best in classical history. And not so long ago I, and others, sadly noticed that so few of Haydn’s 60 plus piano sonatas were available in high resolution. Coincidence or did producers took this at heart? Whatever the case, here we have another set of which only one, Sonata 47, overlaps with two other excellent recordings available, thus adding 5 more to the catalogue.

(Note: I’m not counting the Blu-ray recording with Tom Beghin on Naxos NBD0001-04, covering all of the same sonatas, nor Lang Lang’s recital on Telarc SACD-60524; I may furthermore use this opportunity to point out that sonata numbers are different from Hob’s numbering).

I’m very happy to see this additional series of such lovely sonatas getting to our melomane’s niche market. Einav Yarden is not only new to me; she is a big surprise as well. Her ‘toucher’ is, indeed, feminine, but that isn’t all. Listening to Hoboken XVI:32, the more familiar of these sonatas, and comparing it with the superb accounts of Yevgeny Sudbin (BIS) and Enrique Bagaría (Eudora), one notes that Sudbin plays with the power of the Russian school and the emotion of Beethoven; that Bagaría plays with meticulous soberness (and occasional humming), whereas Yarden shines with a delicate and disarming frankness as well as transparent simplicity. Of the three, her interpretation, though incomparable as we are dealing with a concert grand versus a Schantz piano forte from his own collection, comes closest to my old and cherished 1981 RBCD recording of Paul Badura-Skoda on Auvidis-Astrée.

Not all sonatas in this recital are of the same weight and most are, indeed, seldom heard in public. But they do give evidence of the various techniques Haydn so skillfully mastered in his middle period (1773-76). Some may sound simple, but on second hearing they turn out to be most ingeniously concocted; nothing too much, nothing too little. Or, as the Germans say so eloquently: “In der Beschränkung zeigt sich der Meister” (the limitation shows the master). And, as I have said elsewhere: the smallest mistake may spoil it all. I can reassure potential buyers: She does not.

Summing it up: This is a fine recital, which can safely be taken as a prime recommendation for enlarging your collection. The more so because there is, in spite of the chosen recording location (Westvest Church, Schiedam, The Netherlands) no sign of ‘hollowness’ or reverberation, nor of any traffic outside. In fact, the piano sounds as though Einav Yarden is playing in your own ‘salon’.