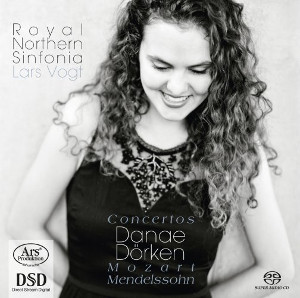 Here we have a confirmed pianist conducting a ‘royal’ orchestra in support of a younger colleague with remarkable result.

Rather than banking on ‘sales through names’, ARS-Produktion has once more opened its doors to a young up-and-coming piano talent: Danae Dörken of Greek-German origin. Her name has already created a positive buzz in Germany for her poetic playing; on the global stage, however, she has not yet hit all box offices. This is her third disk with ARS-Produktion and her debut recording with orchestra. Although the chosen orchestra is not German, there is, nonetheless, a clear link. Last year, Lars Vogt succeeded (in Gateshead, near Newcastle upon Tyne) another established German talent, violinist Thomas Zehetmair, as Music Director of the Northern Sinfonia, since 2013 ‘Royal Northern Sinfonia’, a title bestowed upon them as recognition by the Queen of England of its quality and its importance for the region. Danae Dörken's playing is, as far as I’m concerned, a discovery, which, recorded in fine surround sound, merits our unreserved attention!

The two compositions on this disk are an unusual combination, each demanding a different stylistic approach. Danae Dörken apparently had a sentimental reason to do so: “These two concertos are the piano concertos of my childhood, and it therefore means a lot to me to record them for my orchestral debut album”. Respecting her choice, one wonders if this is a wise one. Mozart, representing the ultimate refinement in classical style, needs a straightforward pianistic discourse, whereas Mendelssohn - while having its roots in the classical period - clearly requires a finely tuned romantic slant. Playing both in a similar vein risks doing no justice to the one or the other.

Comparison with Christian Zacharias and (until 2013) ‘his’ Orchestre de Chambre de Lausanne, an orchestra with a slightly larger complement, reveals that his’ is a well-polished and pure Mozartian performance, as against that of Dörken’s, with a more poetic and, consequently, somewhat less articulate flow. Of course, these are also matters of taste, and her ‘mentor’ Vogt obliges with a similar, though always most supportive accompaniment. The ‘Elvira Madigan’ theme (second movement) comes off well, with a fine balance between soloist and orchestra. And since the string section is smaller than that of the Lausanne Chamber Orchestra, the woodwinds get ample opportunity to shine.

Transposing the poetic approach to Mendelssohn, we are in another world were both soloist and conductor are able to paint a completely different and expertly shaded picture in a performance which, to my mind, can compete with the best. There are many first rate recordings of Mendelssohn’s second piano concerto, but most remain in the realm of virtuoso, brilliance and velvet romance. Danae Dörken goes a step further. Here technique allows her to fully extract the Heart & Soul of the matter. Mendelssohn is so much more than a melodious composer. His inner self is so often overlooked by musicians. Here lies Danae’s force. In spite of her young age (24 or thereabouts) she displays a luscious maturity comparable to older colleagues like, indeed, Lars Vogt. She turns the Adagio into an emotionally charged song of beauty and she technically rises so easily above the level of difficulty that she can, even in the fastest passages, shape and phrase Mendelssohn’s language in such a way, as though, through her faithful interpretation, he is talking directly to listener. What a wonderful sensation. Of the available high resolution recordings of Mendelssohn’s concerto Op. 40, this undoubtedly is a strong contender for the top of the list.

A word about the orchestra. Although it doesn’t sound as homogeneously composed and polished as their Lausanne colleagues, the RNS speaks a surprisingly different and spontaneously fresh language, with lots of shades and colours. And one senses, as it were, the shared pleasure during the recording sessions.

Summing it up: What some may feel is missing in Mozart is more than compensated in Mendelssohn, for which I would give this disk a clear recommendation, especially for those seeking, like me, a new and thrilling performance of Mendelssohn-Bartholdy’s second piano concerto.

New recordings of Mozart PCs are becoming more of a rarity these days so it will be interesting to see what this young woman makes of the 21st. It is hard to imagine anybody beating Murray Periah's legendary recording from way back which is available on SACD. Mendelssohn is certainly an odd coupling, another of the Mozart concerto's would have been more attractive to buyers one would have thought?

These are hugely enjoyable performances from an artiste who is new to me but on this debut showing promises a glittering future. Danae Dörken has an assured and authoritative touch possessed of a natural sense of rhthym and deeply sensitive expressiveness.

It is a bold choice of works for a debut disc and Ms Dörken does not disappoint instilling an exhilarating freshness to them, making the disc all the more attractive for collectors. She is more than ably supported by the Royal Northern Sinfonia who play here with tremendous enthusiasm and verve. An easy recommendation.

The sleeve notes wrongly suggest that the RNS are the only UK ensemble to play in their own purpose built concert hall - The Sage - at Gateshead, a small, industrial community neighbouring Newcastle on the River Tyne in north-eastern England. The CBSO and the Bournemouth Symphony also might be surprised to hear this.

This has become one of the real treasures of my collection !

Thinking of this disc and the others on Ars Produktion, as well as the astonishing recital last summer at the Gstaad Festival in Switzerland, I want to put in a word to everyone to encourage Ars Produktion to record Dörken and Vogt in the 2 Brahms concertos! That would be REALLY great!

Strange isn't it how few modern artists are prepared to tackle the Brahms Concertos. Certainly the works are lengthy and moderately difficult to learn but neither is at all tedious. One possible factor is the relatively lack of enthusiasm for Brahms amongst concert planners these days perhaps reflecting the fickle mood of audience fashion. Nevertheless both concertos are deeply romantic works with "good tunes" as indeed is the Violin Concerto and these works should be enjoying greater popularity than they are at present.

In the hope that the Art Produktion team may pay some attention to this website, I second your proposal Bruce.