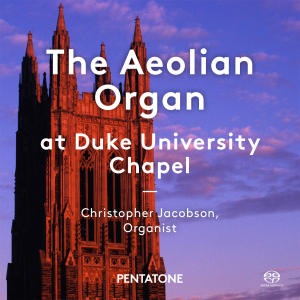 
The Aeolian Opus 1785 pipe organ of Duke University Chapel in Durham, NC was built in 1932 and completely restored in 2008. It stands today, as it did over eighty years ago, as a towering testament to the twentieth-century symphonic tradition of organ building. This album presents a collection of equally twentieth-century organ compositions, transcriptions and arrangements, ranging from Irish folk tunes arranged for organ by Edwin H. Lemare and Gospels by William Bolcom, to Marcel Dupré’s monumental Trois Préludes et Fugues Op. 7 and a transcription of Sibelius’ Finlandia, all performed by Duke Chapel’s organist, Christopher Jacobson. It is the first commercial recording made on the instrument since its restoration and it gives a chance to hear the instrument’s unique voice in a way never possible before.

It is particularly the instrument’s unique voice which inspired Christopher Jacobson to record this album: ‘The orchestral sounds of the Aeolian organ at Duke Chapel represent a special and unique voice amongst America’s organs. Designed to rival and complement the sounds of a symphony orchestra the Aeolian’s ability to elegantly whisper and powerfully roar is paralleled by only a handful of other organs across America. Not many of these large symphonic organs have survived in their original state into the twenty-first century. This disc represents a sonic journey one-hundred years back in time to a period when these tremendous instruments were regularly heard by thousands of music lovers in homes, concert halls, and churches across America.’