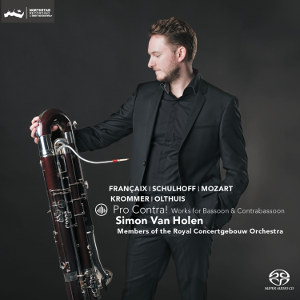 
Bassoon and contrabassoon; a kaleidoscopic rainbow of virtuosity, concentrated into a single CD. Perhaps there’s nothing unique here, but nevertheless it is something quite special and unusual the instrument had to wait until the twentieth century to really find its feet, amidst what was a wide-ranging exploration of new sonorities.

Even following the instrument’s wave of emancipation last century, the very first composition ever published for solo contrabassoon, the Baßnachtigall (1922) by Erwin Schulhoff (1894-1942), is still something of a rarity. Baßnachtigall sounds serious and droll at the same time, even occasionally fleet of foot, and with a tendency to virtuosity. The BACH motif and a Fugue leave us in no doubt that the classically trained Schulhoff was fully aware of what he was up to.

It takes the merest whiff of the frivolous elegance in Mozart’s Sonata KV 292 to be enchanted by what Mozart allows the bassoon to achieve, within a limited instrumental range – to sing. Mozart’s ability to make instruments sing is in fact unparalleled by any other composer.

Jean Françaix (1912-1997): lightness and humour best typify the bulk of the composer’s output: the music of Françaix is a manifestation of French ‘joie de vivre’. The Divertissement for bassoon and string quintet (1942) is a telling example of this. Lively, whimsical, waspish and brimming with rhythmic subtleties, the piece demands extreme virtuosic precision from its performers. The Quartet op. 46 no. 1 (1804) by Franz Krommer (1759-1831) – a gallant and dashing work with, as was customary, a contrasting touch of melancholy in its Andante, is permeated by the same divertimento ambience.

As a writer of chamber music, symphonic works and work for the musical theatre, Kees Olthuis (1940) may be more familiar with the bassoon and contrabassoon than almost any other composer. He would describe his own musical language as ‘extended tonal’. In his Concertino for contrabassoon and string quintet (2014) he combines this with a lyrical, drama-inspired narrative skill.

Jacques van Holen (family of the soloist or just coincidence?) rightly says in his liner notes that the popularity of the contra bassoon “probably is as low as its pitch”, adding that the popularity rating of his smaller brother “would still be unlikely to reach the top ten”. This latter thought seems to me a shade too modest with so many wonderful bassoon concertos in the catalogue. Anyway, here we get a kaleidoscope of multifarious pieces from five composers (bien étonnés de se trouver ensemble?) for bassoon and contra bassoon which should not fail to hit the top ten bracket of any serious bassoon lover.

As far as I have been able to establish, the basic thought behind this release is Simon van Holen’s wish to demonstrate the technical qualities of the contra bassoon, going beyond the ‘grumpy grandfather’ in Prokofiev’s ‘Pierre et le Loup’. However, apart from Erwin Schulhoff’s ‘Bassnachtigal for contra bassoon solo’’, there isn’t much available to do so. To solve this problem he invited the Dutch composer, Kees Olthuis, to write for him a ‘Concertina for contrabassoon and string quintet’.

The other three compositions are for ‘the little one’, and the humorous character of this instrument is best heard in the opening piece by Jean Françaix in his ‘Divertissement for bassoon and string quintet’. These around 10 minutes of joyful music making are in sharp contrast with the following solo work of the Czech composer, Erwin Schulhoff. His Jewish descent and the in his time not very well understood, provocative attitude enabled the Nazis to more or less easily label him a ‘degenerate’ composer. The first movement ‘Melancolia’ may have anticipated this development. However, rather than conveying a sense of melancholia, the ‘wittiness’ of the bassoon leaves the listener with an intriguing mixture going from seriousness to almost merriness, amplified in the second and third movement. It has to be heard to appreciate its impact.

In fact, the somber mood is much more present in the slow opening of Kees Olthuis’ concertina. This new work, premiered here, is undoubtedly the major composition on this disk. As a former bassoon player at the RCO and the Netherlands Wind Ensemble, as well as two earlier compositions for ‘the little brother’ and string quintet, he knows better than most how to handle this instrument. It surely is a welcome addition to the catalogue.

Mozart and Krommer don’t need any further comment. Mozart’s youth duet is played with elegance and Krommer’s quartet is more than the salon demand of the period in which he lived, in that he has chosen to replace the violin with a second viola, thus giving the bassoon a befitting platform.

Support for this unique project came from colleague musicians of the Royal Concertgebouw Orchestra, individual sponsering and Bert van der Wolf of Northstar Recording Services. Taking furthermore into account that the recording was made in the famous Galaxy Studios in Mol, Belgium, one may expect the best available musical and technical quality. And, indeed, all is A 1+.