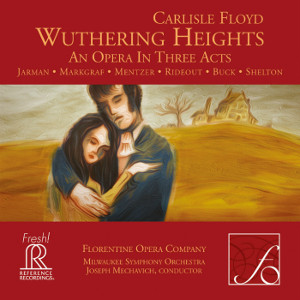 
Carlisle Floyd’s canon of operas is amongst the most performed by any living American opera composer, however four essential operas have never been commercially released. Wuthering Heights was first performed by Santa Fe Opera in 1958, but never recorded until now. With the composer acting as artistic advisor, this Florentine Opera premiere recording was made in January 2015 at the Sharon Lynne Wilson Center for the Arts, in Brookfield, Wisconsin. Reference Recordings is proud to release this exceptional recording.

Carlisle Floyd, 90 years of age in June 2016, is still creating new operas (his newest, Prince of Players, was presented to great acclaim by Houston Grand Opera in March 2016), and is intent on having commercial recordings of all his operas released during his lifetime. Describing the music of Wuthering Heights as highly dramatic and quite melodic, Floyd has said he is thrilled to have it recorded. The Florentine has released plans to follow Wuthering Heights with recordings of Floyd’s Willie Stark and Bilby’s Doll.

Wuthering Heights was recorded and mastered by the team at Soundmirror, whose outstanding orchestral, solo, opera and chamber recordings have received more than 70 GRAMMY® nominations and awards.

As I write this review, America's foremost living opera composer Carlisle Floyd is just approaching his 90th birthday and, to his credit, is still continuing to compose new operas. Floyd entitles Wuthering Heights, the work under consideration, as 'a musical drama in a prologue and three Acts with dramatisation and text by the composer after the novel by Emily Brontë'. In the liner notes with these discs he writes that he is of the opinion that this opera is one of his best, both in text and music – a view with which many may concur having heard this compelling world premier recording on the Reference Recordings Fresh! label.

Floyd's first major opera 'Susannah' was a huge success when it was staged in New York in September1956 a few months after its world premier in Tallahassee, making him one of the most highly regarded American opera composers of his generation. Following this success Floyd went on to compose Wuthering Heights (1957-58), a commission from the Santa Fe Opera. Initially the work received some scathing criticism resulting in the composer making major revisions to both the music and the libretto and it is this revised version that is recorded on these two SACDs. To set Emily Brönte's classic tale of ill-fated love and revenge to music is an ambitious project for any composer to undertake, something Bernard Herrmann discovered when after eight years of toil he eventually completed his opera of the same name in 1951.

For much of the work Floyd writes in an expressive parlando style that allows the words to be clearly heard even when the voices are competing with large orchestral forces. The dark brooding orchestral score is, even allowing for the tragic nature of the story, mellifluous and often lushly romantic in the style of Puccini and Samuel Barber as, for example, in Edgar's aria “Then marry me Cathy and make me whole again” (Act 2 Scene 2 ) ardently delivered by tenor Vale Rideout. Floyd's confident handling of his orchestral palette and his ability to create atmosphere is clear from the start where the doleful horns that open the work immediately capture the bleakness of the North Yorkshire moor setting.

It would be hard to imagine a more committed and much better sung performance than that given here by the Florentine Opera Company, one that has the imprimatur of the composer. The casting of the principal roles is very strong and led by the the soprano Georgia Jarman as Cathy and the baritone Kelly Markgraf as Heathcliff. Jarman's gleaming soprano has the power to ride over the orchestra when required, but she can also sing with great tenderness and her impassioned portrayal of the opera's tragic heroine is wonderfully expressive throughout. Kelly Markgraf is a commanding and virile sounding Heathcliff whose rhapsodic account of “Was there ever another place in all the world like this!” (Act 1 Scene1) makes him the epitome of the romantic hero. The singers of the supporting roles generally don't disappoint, with Susanne Mentzer (Nelly) and Heather Buck (Isabella) worthy of special mention. The Milwaukee Symphony Orchestra, firmly directed by Joseph Mechavich, does full justice to Floyd's dramatic score with responsive and vibrant playing sumptuously recorded.

The concert recording took place on January 9th and 11th 2015 at the Sharon Lynne Wilson Centre for the Arts, Harris Theatre, Brookfield, Wisconsin with the composer acting as artistic adviser and the Soundmirror recording team have certainly captured the feel of a staged performance. The recording (5.1 multi channel and 2.0 stereo) was made and post-produced in DSD 256 and is both rich and spacious.

The two discs are supplied in a shrink-wrapped double SACD case with the complete libretto simply placed on top of the box. Use of a slip case would have been advantageous as with nowhere to store it once the wrapping is removed, the libretto could easily be mislaid. Another odd point is that the singers do not always sing the exact words given in the printed libretto which sometimes makes it difficult to follow – no explanation is given for this. I would have also welcomed more cue points, (those provided only come between Scenes) and a less awkward side break between the two discs. These minor quibbles of presentation in no way detract from what is, in every respect, a very fine achievement. 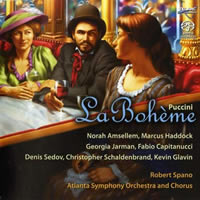