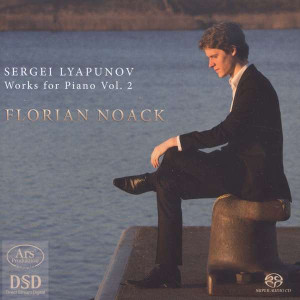 ECHO-winner Florian Noack continues his complete recording of the piano works by Sergej Lyapunov. Whether characterized as a creator of little musical forms or as a master of large forms, as a non-party European or as a Russian patriot, his music is always extremely powerful and effectively virtuous.
Reviews (1)

He may not be one of the greatest composers of all times, but until ARS Produktion released Vol. 1, and now followed by Vol. 2 of his piano music, Sergei Lyapunov was one of the great absentees on this site. BIS recorded in 2014 three of his 12 ‘Études d’exécution transcendante’ Op. 11, as part of a recital by Clare Hammond (BIS-2004 SACD). But for a wider choice aficionados’ of late romantic Russian music will have to turn to RBCD to enjoy, inter alia, his two piano concerti, a violin concerto and two symphonies. This is a sad shortcoming, hopefully taken up by producers of high resolution audio as these other works are certainly most rewarding and lovingly accessible compositions, by some even qualified as ‘unashamedly romantic’.

Apart from being a composer in the Russian tradition, said to be “in between Tchaikovsky and Rachmaninov” (I’d say he is more in between Chopin and Brahms), Lyapunov was a highly talented pianist. Piano rolls exist on which he plays some of his own compositions. Not having heard any of it I have no opinion about him playing his own works. But in terms of sound quality there can surely be no doubt that the young Belgian pianist, Florian Noack, captured in top quality recording by the ARS-Produktion team, must win hands down. I was, therefore, eager to listen to what he conveys in musical terms.

In 2002, at the age of 12, Noack was invited to join the ‘Chapelle Musicale Reine Elisabeth’, which is in Belgium the most prestigious stepping stone for a brilliant future; continuing his studies later on in Cologne and Basel. Noack may be labeled champion in the field of piano contests, having taken part in numerous (more than 20), including some prestigious competitions. But you can’t win them all. In this year’s ‘Concours Reine Elisabeth’, he was less lucky. Is that important? Statistics say: ‘no’. How many laureates really make it? Not so many, I’m afraid. Looking through the lists of results, one finds that in some years the harvest turns out to be more durable; in other years much less so. Many of today’s celebrities never participated in any contest. It does have its negative side: Much depends on the day of having to make your impression on a jury. An off day means out of the contest. The fact that Noack’s career is now managed by Hélène Segré’s ‘LNS Music management-artistique’, to whose stable also belong such other young and eminent pianists as Nareh Arghamanyan, Alexander Sitkovetsky and Yevgeny Sudbin, seems to me a clear sign of his level of competence. But isn’t the real proof ‘in the eating’?

And there we are not disappointed. Here we are dished up a meal which is, at times, sweet, energetic, bold and, indeed, romantic. All this music is new to me, and, most probably, to many of the ‘mélomane’ community. No innovating stuff, but altogether of a considerable musical quality. It is almost like listening to Chopin 50 years older, with a fair touch of Brahms. Some may find that it doesn’t go as deep as either one, but for pure classical satisfaction (not meant in the sense of ‘back ground music’) it can hardly be bettered.

Florian Noack is in it for a large part. His rendition does not subtract through over brilliance, but adds with cultured honesty enormously to the overall enjoyment. Noack shows himself once again (like in Volume 1) an ideal interpreter of Lyapunov, leaving the listener with the firm conviction of faithfully conveying his music without any narcissistic motives. His technically competent professionalism projects the music in a way that allows the listener to enjoy it as if it is the composer himself playing the piano. The result makes for a truly wonderful experience, which I cannot but wholeheartedly recommend to all those who want more than the usual diet of over familiar romantic piano repertoire. The more so, because the recorded sound is so marvelously natural that this new compilation, with its ‘palette séduisante’, comes across very realistically in all its varied shades. Florian Noack is not just a promising pianist; he is a true musician as well.

All in all, this disk (as is Vol. 1) is a real and most valuable contribution to the classical catalogue in any format.

From his web site I learned that Noack has embarked on recording all of the Lyapunov’s piano compositions, meaning that we may still look forward to his interpretation of his ‘Études d’exécution transcendante’. These 12 Etudes is one of his most important compositions for piano, which may be seen as a ‘completion’ of Franz Liszt’s ‘Transcendental Etudes’, left unfinished. I’m eagerly awaiting the next Volume. 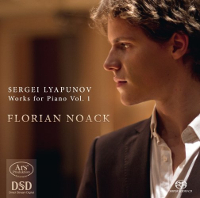