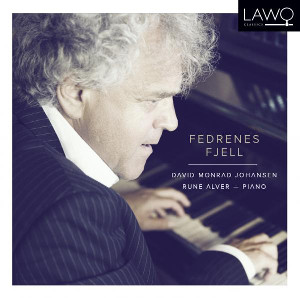 David Monrad Johansen (1888-1974) is a well-regarded composer and musician in Norway, but little known beyond his native land. Educated in Oslo and Berlin, around 1920 he moved on a scholarship to Paris in order to study the newer trends of European music. He was taught by Debussy (whose new impressionist style particularly attracted him), together with Ravel and Stravinsky. In the 1930s, after a long stretch in Berlin learning counterpoint, Monrad Johansen (his usual appellation) began to take more interest in neo-classicism.

During these learning periods and in later compositions, he produced a varied output of orchestra, vocal, choral and instrumental pieces, all of them flavoured by elements from Norwegian traditional music, invested with modal harmony. Monrad Johansen was a fine piano player and produced a Piano Concerto which was popular in his time, as well many collections of short pieces echoing the title of LAWO's SACD, "Fedrenes Fjell" ("The Mountains of our Forefathers"). The programme for pianists on this disc represents Monrad's ability for treating local stories and songs (particularly from Norland County, where he had been born) into pianistic terms. Most of the short movements are grouped, often as Suites, and each track is a powerful short essay with a colourful title. An English version of the track titles follows this review.

Taking an example, the Suite "Nordlandsbilder" ("Images from Northern Norway") was written from 1918-1919. Its first movement is a musical portrait of a heroine from a Norwegian novel; mysterious, with a range of emotions and some beautiful Debussy-like passages. "Den Lille Stengud" (The Little Stone God") is a reflection of a service in an obscure Christian sect. Here, bitonal harmonies suggest the eeriness of various beliefs. "Rensdyr" ("Reindeer") is not, as the composer remarks, "an objective description" of a large herd of deer", but it illustrates in musical terms how the deer become frightened, scatter, and then come together again, before disappearing, leaving only their hoof marks in the snow. The last movement, "Mot Fedrenes Fjell" ("Towards the mountains of my forefathers") evokes the composer's feeling on returning to Nordland.

Rune Alver (b. 1957) is a popular pianist in Norway, frequently appearing on productions by the Norwegian Broadcasting Corporation and giving recitals all around the world. I was very impressed by this important collection of Monrad Johansen's solo piano music; all the evidence suggests that he has great affinity for the composer. I compared the "Gudbrandsdalen" Suite op. 9 with the performance of Leif Ove Andsnes (the most internationally known Norwegian pianist world-wide) in "The Long, Long Winter Night", a two disc survey of Norwegian piano music. If anything, Alver is more subtle than Andsnes, with greater warmth, where Andsnes can be bitter and more restless. Alver's virtuosic upper register presents glittering roulades. Monrad Johansen's many very soft passages in the mid-range are rendered exquisitely and full of emotion which at times may touch the heart and can effectively sound as if from a distance. Monrad also uses the deepest octave on the piano, more than many other composers. Loud passages in the low octave often sound like "banging". But when Alver is loud he also exploits the piano's rich sonority and dark colour. An exciting example using such low end, threatening passages is in "Gudbrandsdalen" Suite op. 9, "The Northern Wind is playing" and there several other last octave sections.

LAWO probably recorded in DXD and the result is exemplary. A piano seems materialise between your front speakers, and in 5.0 mode the warm, helpful ambience of Oslo's Sofienberg Church illuminates the sound more realistically. A well-illustrated booklet in the light-weight 2-gate DigiPak is in Norwegian and English, giving biographies for Alver and Monrad Johansen and notes on the music. Unfortunately, neither the case or booklet have an English programme listing. This is important in this kind of work with many titles, and understanding the title of each track is crucial. Granted that having an English version on each Norwegian list would take up too much room, the booklet list could remain in Norwegian, while the back of the DigiPak could be in English.

Norway's "Resonant Landscapes" by Monrad Johansen presents a continuation of Grieg's piano music to any listener with interest in Scandinavian piano music. Highly recommended. Monrad's music on this SACD could be a stepping stone to investigate his other music, not just his output for piano solo.

IMAGES FROM NORTHERN NORWAY, SUITE FOR THE PIANO OP. 5
I. WOMAN´S PROFILE
II. THE LITTLE STONE GOD
III. REINDEER
IV. TOWARDS THE MOUNTAINS OF OUR FOREFATHERS

FROM GUDBRANDSDALEN, SUITE FOR THE PIANO OP. 9
I. WHEN THE BRIDE IS PASSING THROUGH THE GATE OF THE CHURCH
II. THE LITTLE GIRL AT STUSNES FARM
III. THUS THE SHEPERD CALLED THE FLOCK IN ANCIENT TIME
IV. THOSE WHO WENT TO WAR IN 1807
V. OLD MAN
VI. MY SWEETHEART
VII. SHEPERD´S SONG
VIII. RAILLERY SONG
IX. THE NORHERN WIND IS PLAYING
X. MY IMAGINARY BRIDAL PROCESSION
XI. CAPRICORN

PRILLAR-GURI, SUITE FOR THE PIANO OP. 12
I. PRILLAR-GURI
II. IN AUTUMN
III. OLD WALTZ
IV. CALLING THE FLOCK
V. FROM THE SCOTTISH BATALLION