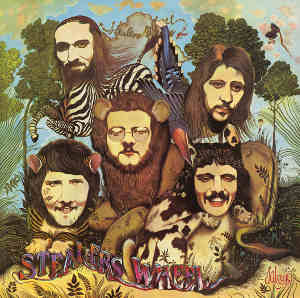 "K-Billy's Super Sounds of the '70s weekend just keeps on truckin' ..." The short but legendary recording career of Stealers Wheel is defined by the pinnacle reached with its first two albums. Listening to this extraordinary debut effort it's easy to hear why many thought Gerry Rafferty and Joe Egan's Stealer's Wheel would become the UK's answer to Crosby, Stills, Nash & Young. The duo's distinctive style is in full evidence, marrying ultra-catchy hooks and melodies to thoughtful lyrics and gorgeous vocal harmonies.

As a band, Stealers Wheel was already disintegrating even as it was being formed. Players were being shifted in and out of the lineup right up to the recording sessions for this debut record, and leader Gerry Rafferty split from the band before the LP's official release (see the vintage video for "Stuck in the Middle" below, with Egan miming the lead vocal in Rafferty's absence!). However, as "Stuck in the Middle" streaked up the charts in the US and the UK, peaking at #6 in the US, Rafferty came back and the band eventually became Rafferty and Egan with backing players in the studio and on tour.

Songs from Stealers Wheel's stellar first pair of LPs have gotten steady airplay since they were released, and of course Gerry Rafferty's breakout success with his solo album City to City shined a bright light on his earlier efforts. Stealers Wheel became an indelible element of pop culture for new generations when maverick director Quentin Tarantino built a major set piece of his own debut Reservoir Dogs around the infectious hooks of "Stuck in the Middle." The scene is as grisly as it is unforgettable and of course it's set up brilliantly by Steven Wright's voice as the world's dryest DJ. However, Stealers Wheel is much more than just its smash hit single. It's an all-time great rock n' roll record from start to finish, a great record to discover or (Re)Discover!

Stealers Wheel’s self-titled debut is sourced from the best source that is currently available, a beautifully preserved ½” 30ips “safety copy” of the original stereo master. When mastering this title for LP we compared what we were getting off the tape to the exceptional original A&M UK “Porky/Pecko” cut on LP. In our mastering we decided to preserve the full (and we do mean full!) bass expression that is on the tape, and that no additional push was needed in the midrange and treble to emphasize detail. The result is a remarkably lively recording with driving bass, wonderfully expressive guitars and living, breathing vocal harmonies from Rafferty and Egan like you’ve never heard them before!

The LP lacquers were cut directly from the analog tape by Kevin Gray, who simultaneously archived from the tape to 24-bit/192kHz digital. These files are essetially high-res archives of IR's LP mastering with identical board settings and EQ with wide open dynamic range and zero compression applied. Kevin converted the 24/192 high-res files to DSD and sent them to Gus Skinas at the Super Audio Center in Boulder, CO. Gus prepared the DSD and CD masters for this hybrid CD/SACD disc; the CD layer is thus a downconversion from the DSD files.

Stealers Wheel is really about 'that song' made iconic through it's use in Reservoir Dogs. 'Stuck In The Middle' though is really a sort of rewrite of Randy Newman's much better song 'Mama Told Me Not To Come'. The rest of the album is fairly undistinguished folk rock, albeit well performed.

Sonically this disc is nothing special either. I can't help thinking that the progression from analogue tape-PCM-DSD results in some low level detail and a certain ambient quality being lost. SACD's with this heritage tending to sound dryer and somewhat antiseptic in comparison to analogue tape to DSD efforts. Still, it sounds OK and lovers of 'that song' will not be disappointed.