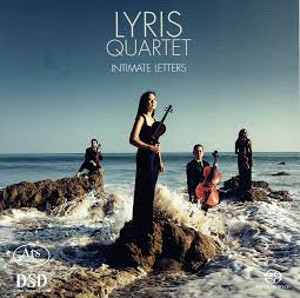 This disk reads like a book; a book with many chapters on one subject. It is not easy reading. You’ve got to read it at least twice to fully grasp and appreciate the content. But the result is most rewarding.

The Lyris Quartet is a well-known formation on the US West-Coast, and although they have been traveling to other places on the globe (they even played in the Follies Bergère in Paris!), it may be worthwhile, especially for those less familiar with them, to quote the following from the HEAR NOW Festival of New Music by Contemporary Los Angeles Composers:

“The quartet was created from a conversation between violinist Alyssa Park, who has enjoyed an illustrious career as an international soloist and is the youngest prizewinner in the history of the Tchaikovsky International Competition and violinist Shalini Vijayan who has built a career as an advocate of modern music as a member of Grammy nominated groups, Absolute Ensemble and Southwest Chamber Music. Drawing on their diverse backgrounds, these musicians chose to create a string quartet that could encompass their love for both standard and modern repertoire and commission works from living composers”.

For their extraordinary project, as laid down on this disk, Leoš Janáček’s second String Quartet acts as a foundation on which 4 new compositions of living, modern composers, played and recorded here for the very first time, are built. All relate to the title ‘Intimate Letters’, but each ‘chapter’ in its own imaginative way. Two have been commissioned by Miriam Schulman, Jacaranda Music, California, who also acts as executive producer for this project at ARS-Produktion; the other two by Madelyn & Jerald and Lee Jackrel and Dr. Vijaya Kumari respectively.

With Janáček’s so called ‘manifesto on love’ as their source of inspiration, Los Angeles composers Billy Childs, Bruce Broughton, Peter Knell and Kurt Rohde were invited to compose personal responses to the romance between Leoš Janáček and his muse, Kamila Stösslová, with a view to forming a unique complex of complementary chapters to the intimate story of Janáček’s tragic happiness.

At the start of the listening tests it became quickly apparent that I was dealing with musicians who know their métier inside out. The way they convey Janáček’s love story adds a new dimension to his music. Many quartets resort to an over exposed juxtaposition of love and despair, as if there is nothing in between. Lyris paint multiple layers of sentiment. While remaining most of the time at the loving side of life, they brush and draw, with firm strokes and fine pencil, a picture of changing colours between longing, doubt, hope and desperation. What some say are ‘ugly’ elements in the score are, in my view, moments of ‘Great Leidenschaft’, and I was impressed how convincingly the members of Lyris were able to deliver such moments. It’s only towards the end of the final movement that feelings of despair come crushing to the surface, followed by the awareness that love will never materialize.

The subsequent four chapters take time to sink in. I had to ‘read’ them several times. It was a great help that in the liner notes the respective ‘writers’ opened-up their souls, allowing readers to share personal feelings as well as their approaches to the subject. I found it a most rewarding, intellectual exercise. All four are, of course, different, but invariably of high caliber.

I find Kurt Rohde’s chapter ‘Inside Voice’ insistent but with real honesty “just as someone who is speaking in an emotionally charged situation wants to be heard, the letter writer wants to be read”. The devilish difficult, rhythmical motives do not pose any problem to Lyris; they ably maintain coherence in the forward urging score.

In Bruce Broughton’s chapter, the dual pronged approach of ‘Fancies’ focuses, so it seems, more on the music than the muse part in his chapter. Janacek’s ‘lettres intimes’ are framed in what may be described as a phantasy, or, as Broughton says: “an accumulation of fancies, i.e. inclinations, impulses and whimsies”. It is a well-structured message that will not fail to attract everyone’s ‘fancy’.

Peter Knell draws his musical language from 2 ‘gentle’ themes from the passionate opening in the first movement. His text is mysterious and esoteric. His chapter remains in its totality in an eerie environment. It may mistakenly be categorized as ‘Zen’, but that would not do justice to the immense power under the surface.

If there has to be a favourite chapter, than it is, for me, Billy Childs’ ‘Unrequited’, taking up the loving intentions, developing these delicately “like the five stages of grief, through a variety of emotions – from romantic pure love through paranoia, obsession and neurotic possessiveness, arriving finally at despondent acceptance”. Nowhere gets the music aggressive, all stages are implicitly expressed. One has, as it were, to read between the lines, and in doing so, the real content of the tale becomes self-evident. Lyris excel in playing soft in tone, but high in tension.

Modern string music demands from players rock solid pitch and secure tonal quality. In this respect Lyris’ strings shine better than in many other readings including those of high acclaim that I have heard (and compared). An important part of the overall quality is due to the recording team and the Hi-Res technique used, assuring wide dynamics and avoiding scratchiness and other disturbing distortions.

A final remark about the cover photo: Those who doubt the reality of this ‘soaked wet’ work of art should look at their facebook account. It's real!