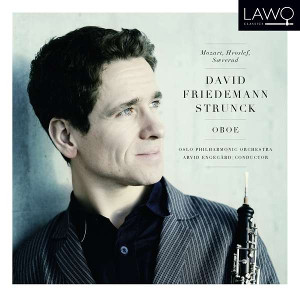 Mozart, Hvoslev, Sæverud - an unusual triplet. But there is a thread of musical logic holding the music of these composers together. We start with David Strunk, Principal Oboist since 2004 of the Oslo Philharmonic. He took part in a performance of young Norwegian composer Hvoslev's orchestral 'Ein Traumspiel', and was so entranced by it, he asked the composer Hvoslev on the spot if he would write an oboe concerto for him.

According to Hvoslev, his new concerto was strongly influenced and inspired by Mozart's Oboe Quartet KV 370, which is considered as the acme of oboe music. Thus this SACD begins with the Mozart Quartet, played by Strunk and accompanied by his colleagues from the Oslo Philharmonic: Elise Båtnes, first concertmaster; Hennige Båtnes Landaas (co-principal viola) and Bjørn Solum, principal cello.

After this, Strunk plays an obvious choice; Harald Sæverud's second Oboe Concerto Op. 12, composed 74 years before Hvoslev's one. Why is this obvious? Well, the famous Norwegian composer Harald Sæverud is the father of Hvoslev, Ketil having changed his name to avoid confusion in their musical careers.

Conducting the two oboe concertos in the Oslo Concert Hall is Arvid Engegärd, born in N Norway in 1963 and noted for his development of a string quartet at the age of 11, taking performances all across Norway. Part of his training was at the Eastman School at Rochester, USA, and now, amongst his visits to the BBC in the UK and many other visits in Europe, he travels to Salzburg's Festival and the Mozarteum Foundation. His understanding of Mozart would surely be useful in conducting Hvoslev's Oboe Concerto.

Grefsen Church on the outskirts of Oslo is a long, brick building, consecrated in 1940. David Friedemann Strunck has made praised recordings there for LAWO with his Oslo Kammerakademi, so he and the engineers and producers are well informed regarding balances and resonance. The result with the oboe and string ensemble is delightful, even sumptuous, a marriage of the church's generous ambience with carefully placed microphones, producing wide sound-stage intimacy.

The Oboe Quartet in F major K 370/368b is without doubt one of Mozart's early masterpieces. It was inspired by Friedrich Ramm, one of the great oboists of his age, and a friend of Mozart, who adored his technique, musicality, beauty of tone and the expressiveness of his playing. While in the service of Collerado, Archbishop of Saltzburg, Mozart obtained permission to go to Munich for an opera commission (Idomeneo). He encountered Ramm there in 1781. In a gap in his opera-writing, Mozart wrote K370, and dedicated it to Ramm, a Quartet to bring out all Ramm's admired expressiveness rather than mere virtuosity. The warmth and joy of the first movement's light-hearted is most affective, and the oboe is generous in duets with the strings. These jaunty rhythms alternate with smoother passages.

The heart of the Oboe Quartet is a dark, lamenting Adagio lasting only 4 minutes or so. Near the middle, the mournful aria briefly changes above lower strings, with a repeated rocking 5-note motif, then returns to the solemnity of the Aria. Quickly, the 3rd movement Rondeau leaps into light and joyous lilting dances, reverting to the second aria scene of the Adagio. Near the end, the oboe plays a tune in 4/4 time, while at the same time the strings below shimmer at 6/8, a delightful polyrhythmic passage and a very unusual one even for Mozart. You would have to go far to find a more compelling and well-recorded K370 than this one by Strunk and colleagues!

Moving to the Oslo Concert Hall and the Oslo Philharmonia under Arvid Engegärd and his baton, Hvoslef's single movement Concerto for Oboe and Orchestra in 1 mvt lasts over 20'. I would describe the overall style of this piece as "friendly" as far as modern audiences go. The Concerto opens with soft trembling harp-plucks supporting the following bird-like oboe's diatonic melodies, setting an unusual atmosphere which takes a listener's attention. Then the melodies cruise further, still slowly but now above purposeful, fractured, dissonant, chugging rhythms. A sense of wonder enters. Note the fine precision of the violins in many pizzicato sessions. About two-thirds into the work, sudden loud, fearsome crashes of chords are interrupted by a strong march-like theme from all the strings, leading to a great crescendo with the brass magnificently displayed. Threatening fear by the brass then quietens the music, re-entering the opening lines, but this time underplayed with hushed military drum figures, finally stopping as if it was the end of the World.

Colourful and unusual instrumental techniques create these successive stages in the Concerto's progress, especially in the relationships of Strunk's oboe solo with the two orchestral oboes. Ricardo Odriozola, writing in the booklet, calls this "polyphonic oboe". The orchestral part in this work is more involved than in most solo instrument concerti, for which Engegärd is to be praised, establishing the transparency of the score and joining with the recording engineers in projecting an astonishing range of detail in a wide dynamic range.Remembering the link between Mozart and Hvoslef, booklet essayist Odriozola tells us that there is "a very joyful short wink towards Hvoslef's beloved F Major Oboe Quartet by Mozart", this from the Rondeau, and is probably based on Mozart's 4/4-6/8 double metre section. Even on my first playing, I was immediately attracted to Hvoslef's work, and to Strunk's perceptive insights of the concerto's often mystic voicing, which brought to my mind some of the symphonic music by Danish Per Nørgård.

Harald Sæverud's Op.12 second oboe concerto is more conventional in that it follows Classical structure of three movements, fast-slow-fast. The first movement is open-hearted and playful, mostly harmonic with Modernist additions; some real tunes move along with colourful orchestrations and rhythms similar to those of Bartók and Stravinsky, whose styles were much admired by Sæverud. The Adagio molto has a poignant melodic exposition by oboe with pulsating strings echoing the melody in polyphony. From the poignant atmosphere of the slow movement, the rondo-style third movement passes directly into pert, skipping tunes, where the composer's signature dotted rhythms can sound mischievous, adding hints of Jazz. Notably, the orchestration is light, almost like a chamber orchestra. Note this is the original version, c.3 mins longer than Sæverud's truncated one.

After the "serious" pieces, Strunk shows us another side of Sæverud's music. The composer produced several several sets of piano pieces, some of which he orchestrated. In this case, the orchestration is a small ensemble of strings without basses, one oboe and one bassoon. Scoring is two part. The original piano part is related by Sæverud: his eldest son, who was watching his Father improvising on the eve of the War. "Are you sad?", asked his Father, whose fingers then began to play the lovely melody which makes the Rondo amoroso Op 14 (7). The Oslo ensemble aptly plays with wistful warmth, which is captured in the realistic microphones in the recording set-up of the Oslo Concert Hall. A delight to end a fine album.

Lawo's presentation is excellent. The SACD is in the usual Digi-Pak with a booklet which carries so much information about the music, history and biographies that the print is tiny - get your specs out! Helpfully, all texts in Norwegian are on white paper, while English is to be found on light green paper.

Ketil Hvoslef and his father Harald Sæverud are hardly known about beyond Norway, at whose borders music seems to stop at Grieg. So perhaps this LAWO album will help spread knowledge of the varied music of these worthy composers. Also it offers a devoted Mozart performance of unmissable quality.