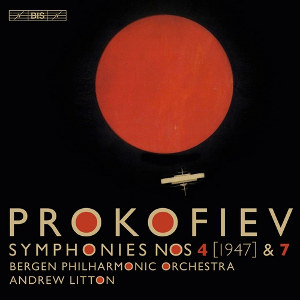 
There is nothing unusual about a composer returning to a major work in order to make revisions, but among such works Sergei Prokofiev's Fourth Symphony is a unique case in that it exists in two such different versions that the composer considered them quite separate works and gave each its own opus number. Composed in 1929–30, the first version, Op. 47, met with lukewarm response at its Boston and European premieres as well as at performances given before Soviet audiences following Prokofiev's final return to Russia in 1936.

In 1947 Prokofiev decided to return to the symphony, producing not so much a revision as a complete reworking of the original material. The differences between the versions are too many to detail, but the main point is that the 1947 version, given the opus number 112, is a much bigger and more ambitious score. Some four years later Prokofiev began work on what would become his last major work, Symphony No.7 in C sharp minor. The composer announced that he aimed at simplicity and was writing ‘a symphony for children’, a statement that was possibly influenced by the fact that he in 1948 had been accused for ‘formalism’ by the Soviet authorities. In any case, there is nothing childish – or simple – about the work.

After the first performance, Prokofiev was persuaded into change the ending, adding a more up-beat and optimistic twenty-bar alternative to the original coda. Both endings are included on the present recording, giving listeners the opportunity to judge the very different effect each makes. The disc is the third instalment in a Prokofiev cycle from Andrew Litton and the Bergen Philharmonic Orchestra, with previous discs receiving warm acclaim from, for instance, Fanfare (‘One of the best performances of the Fifth that I have ever heard…’) and the German website Klassik-Heute, which selected the recording of Symphony No.6 as one of its recommended releases.

This is the third release in the slow emergence of an illuminating Prokofiev Symphony cycle from Andrew Litton and the Bergen Philharmonic Orchestra. The previous two issues, Prokofiev: Symphony 5, Scythian Suite - Litton and Prokofiev: Symphony No. 6, Lieutenant Kijé, Love for Three Oranges - Litton have shown Litton to be a Prokofiev interpreter of considerable distinction and that is confirmed by this coupling of the composer's 4th Symphony Op.112 and his final 7th Symphony Op. 131.

The original version of Prokofiev's 4th Symphony Op 47 stemmed from a commission that he had received in the summer of 1929 for a work to commemorate the 50th anniversary of the Boston Symphony Orchestra. This arrived shortly after the completion of his ballet 'The Prodigal Son', and for the symphony the composer decided to incorporate both material from the ballet and other music he had written for it but discarded. The relative lack of critical success for the symphony led Prokofiev to totally revise the piece in 1947. The length of the original was increased and the orchestration enlarged resulting in a work that, at least in scale, more closely matched that of the 5th and 6th Symphonies. It is this later revised version that is featured on this vividly recorded SACD.

Litton's direction is confident and well paced. He brings tremendous impetus to the fast sections of the long opening movement but also a rhapsodic warmth in the following 'Andante tranquillo'. The final two movements are delivered with both wit and a winning expressiveness in keeping with the balletic origins of the symphony. The wonderfully transparent BIS recording captures the cultured playing of the Bergen P O in clear and open sound that could hardly be improved upon.

Prokofiev composed his final major work, the 7th Symphony Op 131, between December 1951 and July 1952 when he was in a dire state of health. It was commissioned by the Soviet Children's Radio Division as a simple work that would appeal to young listeners, and thanks to its abundance of melodic invention and pellucid orchestration, is one of the composer's most immediately engaging works. The wistful and generally lyrical demeanour of the music does however hide darker undercurrents that some conductors, for example, Valery Gergiev, emphasise in their accounts of the piece. Following its premiere, the desperately poor Prokofiev was persuaded to devise a more optimistic ending to the symphony in the hope that it might win him the Stalin Prize of 100,000 roubles. But just before he died in 1953, he apparently told his friend, the cellist Mstislav Rostropovich that the original equivocal ending was the one to be preferred.

On this recording we have the perfect solution with two complete performances of the final 'Vivace' movement, the first with the original ending, the second with the revised cheerful one. Listeners can decide which one they prefer, but there is no doubt in my mind that the composer's first thoughts were the best.

Andrew Litton skilfully takes a middle-of-the-road course with tempi that are flowing and generally relaxed though always alert. He is fastidious in his attention to textural clarity and the illumination of inner detail, but is not afraid to use a touch of subtle portamento to add extra character to a line or phrase. Once again his Bergen orchestra respond to his direction with thrilling verve, revelling in Prokofiev's typically imaginative orchestral effects with playing of assurance and considerable élan.

The Take5 Music Production engineering team of Jens Braun and Marion Schwebel working in the Grieg Hall, Bergen have once again produced an exemplary 5.0 multi-channel recording (24-bit / 96kHz) matching those of the earlier issues.

Altogether this is another auspicious release in an admirable Prokofiev series and as such can be confidently recommended.

Bissie always promised to complete this survey despite Andrew Litton moving on to pastures new. Good for him. Looking forward to it.

Andrew Litton's Prokofiev is often criticized, wrongly in my opinion, for being too smooth, which I take to mean that some commentators feel he emphasizes the lyrical aspect of the composer's vision at the expense of the acerbic side. As I said, I've always thought the criticism was wrong headed and I believe this disc proves it. We get two very different symphonies each played (and recorded) in a manner appropriate to its particular place in Prokofiev's oeuvre. Terrific.

We love Andrew Litton from his time at Bournemouth where he was a hugely popular personality albeit a modest man of exceptional humility and without conceit. Chatting one-on-one he was an absolute delight especially if sharing a burger at the bar. It seems to me that like all conductors, Andrew has a particular style of presenting his music that makes his performances instantly recognisable much in the same way as you can name a composer from a few bars of their music. One may surmise that personality has a lot to do with the form of presentation. Andrew appears to be an 'old' romantic at heart and that's how his music often comes across, warm and cuddly, jolly, seldom hostile, harsh or frigid.

That is in no way a criticism of his presentations but it must be difficult for even the most gifted of maestros to draw out music from his players that is completely alien to his own character. Do we all not act within the compass of our own personality and experiences? I cannot recall him tackling Prokofiev at Bournemouth but he excelled at Tchaikovsky and his survey there remains a first choice in the catalogue on RBCD. That in itself may tell us a very great deal about the man and his music.

A 7th to remember full of vitality and exuberance that is an aural delight. Whether or not you believe Prokofiev's intentions for the work it certainly brings out the restless child within Maestro Litton. I can imagine him bouncing up and down on the rostrum as momentum builds. This one certainly suits him down to the ground. Good to have the alternative Vivace on the disc as a filler but standing alone offers little more to the mix than academic interest, best to run the symphony as listed. There are three excellent recordings of the 7th on SACD now, all in their way deeply satisfying accounts but should I have to make a choice it would be for Litton narrowly for the sheer unbridled joy of his music making.

The 4th is less convincing; the players do not seem fully at ease with the score although Litton elicits some genuine excitement at times.

The BIS recording is good enough by today's very high standards but not outstanding with some mudiness and congestion in denser passages (stereo) and rather edgy string tones. 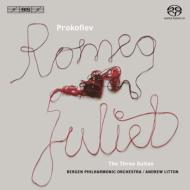 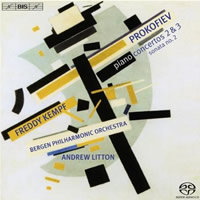 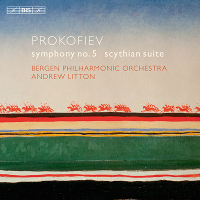