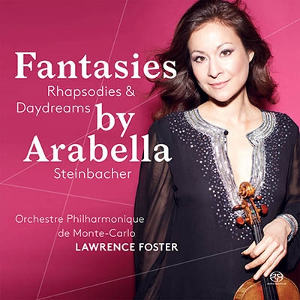 Spectacular virtuoso playing, bravura passagework and show-stopping melodies are balanced with wistful lyricism and sublime tone painting in this irresistible programme of perennial favourites, played with élan by the violinist Arabella Steinbacher with the Orchestre Philharmonique de Monte-Carlo, conducted by Lawrence Foster in this new release from PENTATONE.

From the high jinks and outrageous showmanship of Franz Waxman’s Carmen Fantasie and Pablo de Sarasate’s Zigeunerweisen, to the fearsome technical demands of Ravel’s Tzigane and the exquisite refinement of Saint-Saëns’ Havanaise and Introduction et Rondo capriccioso, this album harks back to an earlier era of violin playing.

“Great violinists like Heifetz, Kreisler, Menuhin … played virtuosic pieces in their concerts,” recalled Steinbacher in a recent interview. She lamented that such pieces are infrequently played owing to the perception that “…this kind of repertoire is ‘not serious enough’ which I find is really a pity and also not true.” For the scintillating Carmen Fantasie, Steinbacher freely admitted that Heifetz was her inspiration. When she heard, that the piece was composed for him mid-career, she was very impressed and decided to make that journey as well “...and I am very glad I did it!”

In a change of pace, the album also features the work which has topped Classic FM’s listeners’ “Hall of Fame” for the last three years running: the much-loved and achingly lyrical The Lark Ascending by Vaughan Williams. Ever the listeners’ favourite, this beautiful piece with its soaring violin part has never been bettered for its sublime depiction of an English rural idyll and it seems fitting that Vaughan Williams completed it following the horrors of the First World War. In a similar spiritual vein, the Méditation from “Thaïs” is included, Massanet’s most famous and imitated work which retains the power to this day to spellbind audiences.

On Steinbacher’s previous collaboration with Foster for PENTATONE in the Korngold and Bruch Violin Concertos, Gramophone magazine noted Steinbacher’s “easy virtuosity with concern to find the right tone and nuance for every phrase” and Foster’s “beautifully balanced accompaniment with notably expressive individual lines”. For her playing in the Mendelssohn and Tchaikovsky violin concertos, again for PENTATONE, Gramophone commented “one could hardly wish for a more expressive account of both concertos”. Following such critical acclaim, this release looks to bolster her status as one of today’s leading violinists on the international stage.

For this recording Arabella Steinbacher plays the “Booth” Stradivari from 1716, a generous loan from the Nippon Music Foundation.

An enjoyable but at times unevenly successful release of some surprisingly rare repertoire.

In many of these works, this is a trip down memory lane for Arabella Steinbacher, for she had already studied everything except the Waxman fantasy. It is this piece with which Steinbacher opens the disc and for the large part it is played extremely sensitively by Steinbacher and Lawrence Foster works his usual magic of transforming apparently mundane orchestral accompaniments into nuggets of musical gold. Compared to the likes of Maxim Vengerov, Steinbacher chooses to emphasise the more lyrical aspects of the music - this is no exercise in "how fast can I play the notes and still be audible?" Despite this more reflective, lyrical approach to tempo choices, there are still several instances of very slight intonation lapses that wouldn't be noticeable one-off but can grate on repeated hearing.

In Sarasate's Zigeunerweisen, one can compare more or less directly to Carmen Fantasie - Anne-Sophie Mutter. Orchestrally, Foster works so well with the Orchestre Philharmonique de Monte-Carlo, that one rarely notices a substantial difference in quality from Mutter's more famous accompanists. Steinbacher, at the end of the first quasi-cadenza passage (of a G minor broken arpeggio) illustrates again a slight intonation lapse that is audible to anyone blessed (cursed?) with absolute or relative pitch. A few instances like this aside, Steinbacher's use of rubato is a lot more convincing than Anne-Sophie Mutter's and the tone of Steinbacher is far more varied.

Vaughan Williams' The Lark Ascending is unusual; not in the way it is played, for all concerned vividly conjure up an idiomatic sound world and Steinbacher spins out her sound with easy, gilded virtuosity. What is unusual is that only 3 accounts of this glorious evocation of nature exist in native hi-resolution recordings! As the other versions (Elgar: Violin Concerto etc. - Hilary Hahn, Arcadia Lost - Wigglesworth) are long out of print (but may still be available) or have rather intrusive audience interruptions, this account of a mainstay of C20 English composition is very much welcome.

Hopping back over the Channel, Saint-Saens' Havanaise and Introduction et Rondo capriccioso follow. Similar to the Vaughan Williams, these works are ill-served on hi-resolution media, with this being the only modern version of the Havanaise currently available and one of two of the Rondo (Saint-Saëns: Symphony No. 3 - Kraybill, Stern being the other). Performance wise, in both Saint-Seans works, Steinbacher builds up a winning dialogue with Foster's orchestra. Again, Steinbacher makes full use of the range of timbres available to her and the Orchestre Philharmonique de Monte-Carlo respond in kind, giving full expression to their (counter)-melodies. A special mention of how subtle the shading of the opening pizzicato to the Introduction et Rondo is in Fosters hands - lovely stuff.

No matter the opinion of rest of the programme, Massenet's Meditation from Thais stands out artistically. Here Steinbacher, Foster and the Orchestre Philharmonique de Monte-Carlo completely upstage (in an appropriately understated manner) Mutter, Levine and the VPO. Steinbacher's playing is delightfully chaste and the interplay with the orchestra is managed very sensitively. Again, somewhat incredibly, this is the only available account of this piece in native hi-resolution available (Mutter's is recorded at CD resolution) and it's so good, it's almost worth the price of the release on its own.

Ravel's Tzigane ends the disc in fine style with all concerned clearly enjoying themselves. The orchestral contribution is far more "piquant" than afforded to Mutter and, in common with the Zigeunerweisen before, the rapport between soloist and conductor together with a less obviously 'forced' sense of rubato. The listener will be rewarded with perhaps the most involving account of this work in its orchestral form on hi-resolution media and will likely provoke smiles of enjoyment several times in its 11 minute duration.

As we have come to expect, Franz Steiger provides intelligent notes for PentaTone. The recording, made in the Salle Yakov Kreizberg of the Auditorium Rainier III, Monte-Carlo is good if not the most outstanding that PentaTone have managed, for the opening of the Waxman (which has the least subtle orchestration of any part of the disc) momentarily sounded a little congested. The rest of the disc showed that to be Waxman's doing, not the engineering teams.

One gripe about the disc that doesn't really fit into either the performance or sonics categories per se, is that there is far too short a gap between each piece. For example, the listener at the serene ending of the Massenet gets a very rude "awakening" from the Ravel before one is really ready to move on. As the playing time was less than 74 minutes, it's a shame that this was allowed to happen.

I was amused to read in the introductory notes that according to Gramophone, Ms Steinbacher was possessed of "easy virtuosity", which is sailing as close to the wind of acceptability as one would care to go. It certainly lit up an otherwise dull evening in our household :-)

Showcase albums of this type do not appeal to me all that much, I just don't see the point of them. An artiste can prove their virtuosity and range simply by taking on the more challenging pieces in the repertoire. It seems then that I am not the target market for such offerings which to me are only marginally more acceptable than mass produced CDs branded as "The Vey Best of ... ", "Classical Top Ten Hits" or "Thoroughly Modern Mozart". You take my point!

This is not to say that there are not some truly beautifully played pieces on this disc, they are all popular, deeply sentimental favourites and Miss Steinbacher brings a languorous and achingly beautiful quality to them all.

Whenever I hear "The Lark Ascending" nowadays, it reminds me of a lovely comment by a friend and colleague on sa-cd.net in reviewing a certain performance...

"The Lark Ascending? I am not so sure this one even became airborne!"

With Miss Steinbacher's coaxing this particular lark not only takes to the air with ease but soars with consummate grace.

Support from Lawrence Foster Orchestra and the Philharmonique de Monte-Carlo is tender and finely judged. Penatatone as is becoming normal now offers a recording of the very highest quality.