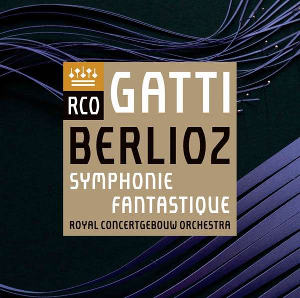 
With the release of this live recording of Hector Berlioz's Symphonie fantastique, RCO Live celebrates the start of its collaboration with Daniele Gatti as the Royal Concertgebouw Orchestra's seventh chief conductor on 9 September 2016. His unconventional take on this spectacular score evokes the astonishment audiences must have experienced at the time of the 1830 premiere. It is exactly this sense of surprise and freshness – founded on a thorough knowledge of the score – and the sheer joy of making music together that prompted the members of the RCO to choose Daniele Gatti as their new chief conductor.

This disc is being released to mark the commencement of Gatti's tenure as Music Director with the Concertgebouw and, like Berg: Lulu Suite, 3 Orchestral Pieces - Gatti, this relationship is already very special.

In terms of heritage, the Concertgebouw have this music in their blood and have recorded it with Sir Colin Davis (Berlioz: Symphonie Fantastique - Davis) and although the characteristic of the acoustic is retained, Gatti's conception is a worthy successor yet also rather different. The first difference of note is that Gatti chooses, like Ticciati (Berlioz: Symphonie Fantastique - Ticciati), to place the violins antiphonally which serves to clarify string textures throughout the work. The second, arguably the most noticeable, difference is that the first introduction of the idee fixe is given a great deal of space: in Gatti's own words from the booklet "And so I took the tempo just a little bit slower there." This decision is, to these ears, something of an understatement but one to which the listener quickly adjusts. After the double bar, the idee fixe is transferred to the violas, cellos and basses whereupon Gatti gives a rather unusual take on the dynamic instructions which is far more disconcerting than the earlier relaxation of the tempo. Generally though, the textural balances are marvellously clean and one would never guess that this recording emanated from concert performances.

Un bal is a delight to the ear from beginning to end. In part this is because Gatti elects to reduce the strings section but mainly it is the marvellously rich, sensitive playing that really gives the aural impression of dew glistening in the morning sun. Like Ticciati, Gatti opts not to include the optional cornet parts and the only other aspect that some may find troubling is the near complete smoothing over of the glissandi specified in the violins. Gatti springs a surprise with the very final chord, opting to deliver a feminine ending to the movement.

The sense of distance in third movement between the cor anglais and oboe is extraordinary, with Gatti encouraging a "pure sound". The balancing of flute and violins is wonderfully sensitive to each section and the contrasting timbres tease the ear delightfully. The RCO sound constantly engaged by Gatti's direction and this is very persuasive music making indeed. More is made of the sf markings than either Ticciati or Davis in the central section allied to a nuanced use of vibrato and tone in the strings to magical effect. When the storm arrives, Gatti and the percussionists take tremendous care to ensure that every single note is audible; this is wonderfully managed by all concerned.

The march to the scaffold starts atmospherically with stopped horns taking on an appropriately sinister timbre. The early string tutti is made to be infused with gallows humour in the form of a show of musical bravado, with the wind & brass interjections somberly pricking the pomposity. The grand march is a joy to the ear, obviously because of the efforts of Gatti and RCO but also because of the absolutely first class recording. If there is any criticism to be made, it is that the upper woodwind in the lead up to the "execution" are not quite as prominent as one might wish. For once, one can hear the rising arpeggiated chords in the violins at the very end - very impressive from all involved.

The last movement contains some exemplary dynamic contrasts and Gatti, after the opening spine-tingling effects, is not one to hang around - the pause between the two Allegro sections leading to the Dies Irae is used (only) to clear the air, musically speaking. Unusually, Gatti opts to have the bells struck at a volume in accord with the rest of the orchestra rather than the sometimes enhanced dynamics afforded to them; it's a refreshing change. The witches sabbath is full of all the characteristics described above and there were moments where the performance evoked thoughts (in terms of textural clarity and musical excitement) of Abbado's extraordinary achievements in Mahler with the Lucerne Festival Orchestra. As the fugal writing gradually builds Gatti's inspired direction continually achieves wonderful textural balances, incredible clarity at every turn, extraordinary dynamic range and to cap it all, a great unified response from the RCO.

As already hinted at, the recording served up here is nothing short of sensational. It's scarcely credible from the lack of audience noise that this derives from concert performances, the clarity is astounding (even for this hall) and the reflection of the playing in the dynamic range is simply wonderful. Added to this, we have a very well conducted (sorry) interview with Gatti as he describes his approach to this inexhaustible masterpiece.

This is simply outstanding music making and one can quite see why this collaboration became the prelude to their longer term relationship; better yet, the recording is as good as the performance.

Delighted to see that this RCO live recording is in DXD, offering a welcome leap forward in sound fidelity from the usual 96/24 PCM format used for RCO Live recordings.

As long time collectors will remember when this project started just after the turn of the century Polyhymnia recorded the RCO concerts in DSD 64 separately from the regular radio broadcast recordings made from the venue at the time. Due to physical constraints at the Concertgebouw, the two recording operations were soon merged and the SACD releases reverted to 96/24 PCM format. Those early DSD 64 recordings were simply magnificent in their ability to convey the real feelings and sense of atmosphere of a live concert in the Concertgebouw; they even had applause to ensure your listening experience at home was as real as possible. If they are not in your collection, I urge you to buy them whilst they are still available. If you need the catalogue numbers I'll list them.

One wonders if Maestro Gatti might be an audiophile at heart? Whatever the reasoning for this upgrade, co-inciding as it does with the arrival of the new conductor, Polyhymnia are to be congratulated for their continuing support of ur besieged community.

Having now heard this recording for the first time, I am bound to say that John's review is absolutely spot on in all respects. Excellent work!

Whether one wholeheartedly endorses what is being served up by Maestro Gatti is another matter. I found the slow tempo entry frustrating and rather too mannered with one or two very noticeable technique flaws distracting. It seemed to me that the orchestra and conductor were not fully as one but it's early days in their relationship. In context, I am quibbling a little over an outstanding performance by the RCO and a superb recording by Polyhymnia of huge scale and dynamism. Not first choice on SACD but worthy none the less. I still plump for Gergiev at the Barbican in his LSO days which had a superb filler as well

On 22th October Gatti conducted Mahler's 10 (Adagio) as well as Berg's 3 pieces for Orchestra. Polyhymnia will release the concert on SACD sometime in the future.

I just downloaded Symphonie Fantastique - Gatti in DSD256 multichannel and must say I was very impressed. The dynamic range is superb with an excellent soundstage. Great music. Interesting to me is how conductors can be so inconsistent. For instance, I just listened to Norrington's Berlioz: Requiem. Fantastic. Yet, his future releases, according to reviewers, did not fare too well. Gatti, I believe, did a fantastic performance of this piece. It may be true that a great review may cause me to be favorable. I do not know music well enough to judge. Yet, as an avid consumer, I do judge for myself what I hear sonically. I cannot afford everything. I collect what is well reviewed and offers excellent sonics (typically, I stick with newer releases with the best technology and excellent sound engineers). This performance did not disappoint.

In case you did not know, I discovered that the entire performance is recorded in HD (1080P) video and available on the Concertgebouw website. Concert recorded 1 April 2016. The pdf file says the SACD was recorded 31 March, 1 and 3 April 2016. The concert hall was packed, including audience members sitting behind the orchestra (of course, pre-covid). I enjoy watching the performers and conductor to get a sense of how it all came together on the recording. Personally, my listening seems better informed.