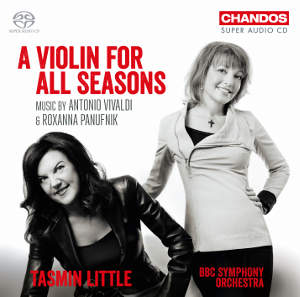 
Encapsulating the voluptuous sound of the BBC SO's strings, Tasmin Little is both the soloist and conductor in this unique coupling: Vivaldi's ever-popular 'Four Seasons' meets Roxanna Panufnik's Four World Seasons, the premiere recording of a set of highly inspirational pieces. As a complete cycle, 'The Four Seasons' offers a set of vivid tableaux, imaginative, enticing, and wonderfully contrasted, with ample chance for the violin soloist to display technique, sensitivity, and colour. These are qualities that the British composer Roxanna Panufnik also sought for her own Seasons tribute, Four World Seasons, written for the violinist. Three of the pieces are dedicated to her, while the fourth, 'Autumn in Albania', is dedicated to the memory of Panufnik's father, the Polish composer Sir Andrzej Panufnik, who, his daughter says, was born, loved, and died in autumn.

A rare occurrence these days, a full symphony orchestra sized accompaniment to Vivaldi's perennial favourite and paired with a potential modern classic.

As a note from Tasmin Little herself explains "I am not a baroque player; although I have been influenced by marvellous baroque violinists ... [their] style of playing is not the way in which I best express my musical thoughts." So is this (in the context of the HIP environment which holds sway today) bold experiment successful? In many ways it is and although Little downplays the amount of influence that HIP practice has brought to these interpretations, they are much closer on the "traditional"-HIP continuum to HIP accounts than the likes of, say, Michel Schwalbe under Herbert von Karajan's direction. True, the BBC SO cannot produce the same icy textures in Winter that period instruments manage and nor are the characterisations as vivid as many paint them but for those who find HIP rather off-putting, this is a welcome addition to the catalogue with both Little and her harpsichordist (David Wright) indulge themselves in very tasteful idiomatic improvisations as the mood captures their imagination. This is as good "big band" Vivaldi as one could expect to hear today and is something of a "glorious revolt"(!) against the current vogue, even if purists may feel it lacks the heightened contrasts in tempos, timbres and dynamics that the finest HIP purveyors bring to this era of composition.

Good though the Vivaldi is, the real draw to return to this disc is the music of Roxanna Panufnik, who dedicated three of the Four World Seasons to Little. The first is in memory of her father, Andrzej, and is entitled "Autumn in Albania" which is wistfully rhapsodic with some harmonic shifts that successfully seek to make the aural landscape spin. The second, Tibetan Winter, employs the Tibetan singing bowl (played by Graham Bradshaw), although it is the solo violinist who dominates opening portion of the movement. Here Panufnik conjures multiple layers of orchestral texture that sound at different speeds and envelope the lyrical line of the soloist. The third season is "Spring in Japan" and is full of life that employs timbres across the entire spectrum of the string orchestra; this is the most closely integrated movement of the soloist with the orchestra and all respond with tremendous commitment. Panufnik's collection closes with "Indian Summer", in which she employs many techniques of that country's art & folk music to reimagine them in concertante string orchestra form. Throughout the entire collection, the strings of the BBC SO sound as passionate and eloquent as Little.

Helpfully, Roxanna Panufnik provides enlightening notes on Four World Seasons to accompany Tasmin Little's commentary on her thinking about this disc in addition to Jessica Duchen's concise summary. The sound reveals the clarity of the playing and complements the very different sound worlds heard.

Recommended for those yet to fully embrace the notion of period performance practices in Vivaldi and for the inspiring Panufnik (music and performance).