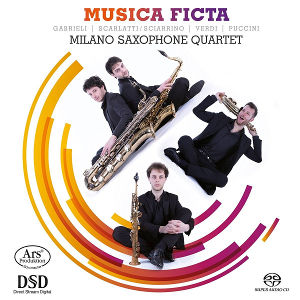 Adolphe Sax, had he still lived, would be a happy man. Of late a number of saxophone quartets have come our way. Being a relative new instrument, they all have one problem in common: Lack of dedicated repertoire. To remedy this arrangements or transcription are the order of the day, a must, even. Not surprisingly the Milano Quartet has sought and found inspiration from their Italian musical heritage. Two out of the four items on record (Gabrieli and Puccini) have been transcribed, or rather arranged by the Milano’s; Scarlatti was arranged for saxophone quartet by Salvatore Sciarrino, a self-taught Sicillian composer, whereas Verdi’s String Quartet in E minor, is a transcription of Alberto Di Priolo, a confirmed alto saxophonist (ThymoSax Quartet) mainly known from the cool jazz scene!

The growing interest in saxophone quartets is clearly due to the fact that these instruments belong to a same family, allowing their combined sound to blend in so very well. Not only do we owe that to the craftsmanship of Mr. Sax, the players, too, contribute greatly to creating such a sonorous blend by the way they handle their instruments. For the record: There is a huge difference between playing in a pop band with a soaring sax, than using these instrument, as it was no doubt meant by Monsieur Sax, with its restrained classical embouchure. This opens the way to successfully compete with a string quartet and playing most of its classical repertoire.

The recital on this disk starts with a short and attractive arrangement of a 'Canzon Seconda a Quattro', followed by seven 'arranged' Dominica Scarlatti’s keyboard sonatas under the title 'Cansonniere Da Scarlatti'. Both are well done and well played. I’m less enthusiastic about Verdi’s quartet. Which is a pity as it is the main item on the menu.

Verdi’s string quartet does not really belong to the best in its genre. In his own words (translated from Italian): “I've written a Quartet in my leisure moments in Naples. I had it performed one evening in my house, without attaching the least importance to it and without inviting anyone in particular. Only the seven or eight persons who usually come to visit me were present. I don't know whether the Quartet is beautiful or ugly, but I do know that it's a Quartet!” Moreover, this quartet doesn’t lend itself too well for the saxophone unless the players are very experienced. The ‘romantic lilt’ in the strings is so much more difficult to copy by a saxophone than the straightforward classical intonation of, for instance, Haydn. Risk is that with the wrong embouchure or too much air, tones get harsh or even raucous. That may be a good thing in Jazz, but for this highly romantic Italian music of whatever quality the composer thought it worth, technical demands are higher. In particular the soprano sax falls short of what may have been expected from a group with an already well established name.

The closing piece, Puccini’s Chrysantemums Elegy, is the lyrical lament for strings, which he included and subsequently gained popularity through his opera ‘Manon Lescaut’. It is, indeed, a lovely piece, lament or not, equally lovingly arranged and played by the Milano Saxophone Quartet. A befitting end to an otherwise mixed bag, which may nonetheless be of interest to any saxophone lover willing to expand its knowledge about repertoire.

The recording dates from last year (December 2015) and I suppose that the somewhat harsh sounds have to be attributed to the way the members of the Milano Saxophone Quartet prefer to play.

I do hope that the review above does not put anybody off buying this disc.

I disagree very strongly with the tone of the review comments on the Verdi and indeed with the comments regarding the sound quality of the recording, which I find quite lovely and not even vaguely harsh. But there again I am a music lover rather than an expert.

For me it would be a very well deserved five stars performance and five stars for a gorgeous sounding 5.1 mix.