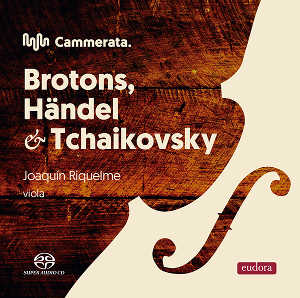 
Founded in 2009, Cammerata bring us for their debut album an exploration of the string orchestra repertoire, in a path from the 18th century to the present day, joined by viola soloist Joaquín Riquelme - member of the Berliner Philharmoniker- in the first recording of Salvador Brotons’s Concerto op. 106. Händel’s Concerto grosso, Op. 6/12 and Tchaikovsky’s masterpiece Serenade, op. 48 are also included in this stunning album, passionately performed by this young generation of Spanish musicians.

The rapid growth of Spain's new recording company Eudora here offers a delightful concert by Cammerata. This chamber orchestra is reputed to be one of the best Spanish chamber ensembles, both national and international. Conductor-less, youthful and energetic, the violin and viola players stand while playing. Cammerata Chamber Orchestra is thus similar to other youthful ensembles which have recorded in high-resolution, such as the Norwegian 'Ensemble Allegria' (Lawo) and German 'Dogma' (Dabringhaus & Grimm). For this first recording, Cammerata have devised a fascinating programme, using 9 violins, 4 violas, 4 cellos, 2 double bass and a harpsichord for the Händel.

The concert begins with a Concerto for Viola and String Orchestra op. 106 by Salvador Brotons (b.1959). Brotons is a little-known composer outside Spain, but hopefully this disc will spread his remarkable talents more widely. At the start of his career, he was the principal flautist of the orchestra of the renowned Liceu Theatre, but now he mostly conducts and composes; he has written over 80 pieces mainly for orchestra and chamber groups. He has also received fifteen composition awards, including the Spanish National Orchestra Award (1977) for his Four Pieces for Strings. He has been the Conductor and Music Director of the Vancouver Symphony Orchestra (WA) since 1991. In 2006 he was commissioned to write a viola concerto by the Spanish Music Festival of Léon, here a première for its recording.

Joaquin Riguelme Garcia is the solo violist (b.1983). At the age of eight, he wanted to play violin, but all openings at the music school were taken, so he studied viola instead. He quickly fell in love with its dark and warm timbre, and at 12 he decided to become an orchestral player. The Eudora booklet gives us a lengthy account of his often spectacular progress. However, we can assess his playing simply by noting his arrival at Barcelona Symphony Orchestra as assistant principal violist and then in 2010 moving directly into the same position in the Berlin Philharmonic. Watching the Digital Concert Hall live broadcasts of the Berlin Philharmonic, I have seen him on screen many times, noting his intense expressions when playing.

Brotons viola concerto has four movements, but is structured as a diptych with the first and second movements connected, as are third and fourth. The pairs are each slow - fast. A feature of the performance is that the specific musical instructions for each movement - Adagio elegiaco, Vivo deciso, Lento espressivo and Allegro energico are very clearly followed. Another feature is its style; not modernistic with unusual rhythms, strong dissonances and rejection of tonality, but in a form of twentieth century style which has unusual amounts of melodic emotion and interwoven complex thematic textures. Since the viola is foremost, Brotons' description of "agile as the violin and profound as the cello", just as Garcia plays. His score also uses the highest to the lowest register on his viola, testing his technique which he does with relish.

To summarise, the opening of the first movement is deeply mourning, building with increasing stress to a central climax, then, with the aid of a solo violin, returns to the early melodies but with attractive polyphonic layering accompaniment by Cammerata. The second movement leaps 'Vivo deciso' into rhythmic whirling, a scherzo without a smile.The third movement (first of the second diptych) is the longest, and has beautiful melodies as well as double-stopping in very high pitches like violin harmonics. Preparation for the next movement involves some tentative hints of a dance. But without a break, the final movement is indeed 'energico' and it is vigorous, strongly rhythmical and tensely played. Played so powerfully by soloist and orchestra, I am amazed that Brotons' works are not extensively available on recordings.

Cammerata use a well-known Händel piece, the Concerto Grosso op. 6, no. 12, to show us that they are also masters of late Baroque styles. While I prefer this music played with period instruments, Cammerata produce a wonderfully transparent rendering, lightly phrased and elegantly phrased, with amusing dance-passages. The opening Largo's serious stepped theme with its short silences and resonant basses leads to the first Allegro, with its controlled fast foot-tapping tune. Aria's well-known tune gives much pleasure to hear the fluid cello and violin solos, supported by a rather shy harpsichord. The second Largo sounds like one of Vivaldi's 'Seasons', which startled me but delightfully so - and the final Allegro skips along paths of elegance in fugal joy. What a fresh performance!

Even considering the fullness of Brotons Viola Concerto, the apex of this SACD is Tchaikovsky's Serenade for Strings in C major (1880). The composer wrote to Nadezhda von Meck, his musical mistress, "The Serenade is the result of a heartfelt inner impulse and of my experiencing a sense of freedom from inhibition". He elsewhere indicated that the first movement was "after Mozart", his idol. This is one of Tchaikovsky's most popular pieces, and there are a decent number of SACDs but only a few of these are reviewed on this site (at the time of writing), so there is little point making usefully detailed comparisons. In any case, the first few bars of Cammerata captured me, and the whole performance had me rapt.

Despite hearing dozens of Tchaikovsky String Serenades in concerts and recordings, I felt that I was hearing it anew, with the subtlety of nuanced phrases, dynamics, emotions and especially the gorgeous voicing of chordal work, which brought a special life of wooing romantics to the Serenades, which was revelatory. It should be noted that the composer himself wrote, "The larger number of players in the string orchestra, the more this shall be in accordance with the author's wishes."
Rich sonorities are certainly effective when the full string body of an orchestra are employed (e.g.Stokowski, LSO Tchaikovsky: Serenade for Strings, Francesca da Rimini - Stokowski). With smaller chamber-sized ensembles (e.g. Cammerata and Boni, Concertgebouw Chamber Orchestra, Tchaikovsky: Serenade for Strings, Souvenir de Florence - Boni), matters such as control of detail by the players and not conductors, clarity and transparency of the ensemble and its spontaneous passion can make better performances than those of large symphony's performances, as Cammerata clearly shows. It's all a matter of taste.

Eudora's sessions were at the Sala Narciso Yepes at Auditorio Victor Villegas, Murcia, in the interior of the Costa Calida – Costa Blanca region of Spain. It is a said to be a "great symphony hall equipped with 1,768 seats, a stage of 300 m2, a spectacular sound with superb visibility from all areas. It is an optimal space to accommodate a broad and rich program with all kinds of manifestations of universal musical culture: symphony, ballet, opera, music, theater music, etc." Several session photos in the booklet show the disposition of the ensemble on the stage and the placing of Sonodore, Neumann U89 and Schoeps microphones. Original format was DSD256 (11.289MHz). Without an audience, there is a pleasing resonance of about 2 seconds, especially from the bass which have notably rich timbre but perhaps loose a little of their attack. The main recorded sound stage is quite close, but wide, with distinct positioning of instruments. The hall acoustics coexists with the music to make a fine SACD sound, especially, as usual, in 5.0 multichannel.

A very fine concert for lovers of a string chamber orchestra. Buy a copy and spread the name of Brotons. 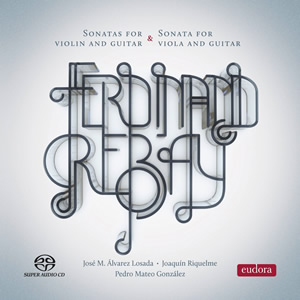