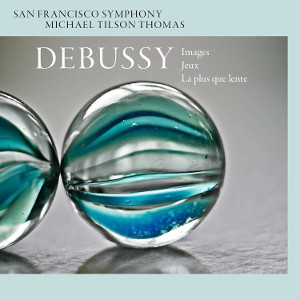 
Michael Tilson Thomas and the San Francisco Symphony release an all-Debussy album featuring Images pour orchestre, Jeux, and La plus que lente. This album brings the vivid landscapes of Images, impassioned playfulness of Jeux, and the sensuality of La plus que lente together in a collection that exquisitely illustrates the French composer’s mastery with orchestration.

In 1971 the young Michael Tilson Thomas made an outstanding account of Debussy's 'Images' in what was one of his first recordings for Deutsche Grammophon. Fast forward 42 years and he returned to these pieces with this entrancing new recording of Debussy orchestral works with the San Francisco Symphony, a body of musicians that he has moulded into one of the finest orchestras in the United States since becoming its musical director in 1995.

In performance terms this latest recording of 'Images' does not differ markedly in style from the earlier one. It does, however, demonstrate a more subtly nuanced approach with regard to tempi, especially in the central movement of Ibéria' – 'Les parfums de la nuit' where the music's sultry and languid atmosphere is beautifully evoked with a marginally swifter pulse. The faster outer sections also benefit from the conductor's firm rhythmic control and the thrillingly incisive playing he elicits from his consummate musicians.

The ballet 'Jeux' that Debussy composed for Diagilev is now widely regarded as one of the composer's finest orchestral works, a far cry from the incomprehension with which it was greeted by audiences following its premiere in 1913. Its textural fragility, fragmentary themes and lack of a recognizable structural form present a huge challenge to orchestral players and conductors alike. Michael Tilson Thomas has the measure of this elusive piece and thanks to the clarity and warmth of the recording his finely balanced account, moving at a slightly faster pace than many, does full justice to the intricacies of this subtle score.

The disc is completed by a delicious account of Debussy's 'La Plus que lente' in its orchestral garb. This brief waltz has already appeared on an earlier release – Masterpieces in Miniature Masterpieces in miniature - Wang, Tilson Thomas, and it acts as a winning encore to the main works on the disc.

Jack Vad's superfine multi-channel live recordings (192 kHz / 24 bit for 'Images' and 'La plus que lente' and 96 kHz / 24 bit for 'Jeux'), made in concerts at Davies Symphony Hall during 2013 and 2014, ensure that every detail of Debussy's fastidious orchestration is always clearly discernible, allowing internal balances to be the sole prerogative of the conductor.

There is no doubt Michael Tilson Thomas's keen ear for sonority and a delicate sense of rhythm combined with exquisite playing from every section of his orchestra make this a most desirable Debussy programme that can be unreservedly recommended.