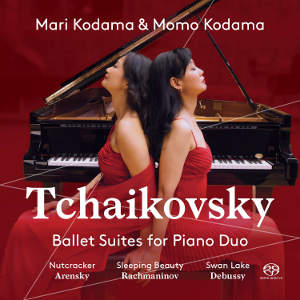 
Together for the first time in the recording studio, the sisters Mari and Momo Kodama are on scintillating form in these lively arrangements of music from Tchaikovsky’s ballets Swan Lake, Sleeping Beauty and Nutcracker. In another first, the release contains the first ever recording of Arensky’s transcription of the timeless Nutcracker together with notable arrangements by Debussy and Rachmaninov.

Conceived on a grand scale, Tchaikovsky’s colourful, often passionate scores for the ballets Swan Lake, Sleeping Beauty and Nutcracker abound with graceful melodies, arresting harmonies and exuberant orchestration. The music has proved enduringly popular with audiences and rates among his most familiar and best-loved works. Composers such as Arensky, Debussy and Rachmaninov made arrangements of these works for piano, not mere reductions but wholesale realisations of the works, combining subtlety and insight with their own technical polish.

“Tchaikovsky was really the first composer to combine a broad sweep of ballet music with a great story,” the Kodama sisters write in their introduction to the release, “before that, it more resembled a compilation of pieces…in all three works there is folkloric and popular music. He has the great skill to make such vivid colours and textures on a large canvas… This makes his orchestral works very special.” “Our challenge was to use just two pianos … to bring the same sense of scale,” they write, “with just two pianos the atmosphere is more intimate, it brings a different quality to the music. And the composers who made the transcriptions brought their own personality to bear on the works. So we tried to reflect that in our playing.”

The sisters Mari and Momo Kodama both pursue busy international careers. Momo specialises in French and Japanese composers and 20th century and contemporary composers; she has been widely praised for her ‘attractive, lyrical tone’ and ‘technical brilliance’. Mari has established an international reputation for profound musicality and articulate virtuosity; she has recorded extensively for PENATONE, including an acclaimed cycle of the complete Beethoven piano sonatas.

“We are quite different pianists and have our own ideas and approaches,” they write, “so we have spirited discussions. But we always find we are aiming for the same thing, usually from a different angle. So it’s been fun to record these works and it has brought us a lot of sisterly joy too!”

Sisters. A special relationship? Anyone with daughters knows about it. The more character, the more disputes, especially if characters differ. According to the introductory note the Kodama sisters consider themselves “to be very different pianists with our own ideas and approaches”. But look at it this way: Not only that in the end close family ties always win, in many a case they sort of add up as well. Such a special relationship creates a complementary bond, which is one of the most important ingredients for a successful piano duo.

Momo, the younger of the two, lives in Paris and works mostly in France, whereas Mari, a few years wiser, has her pied-à-terre in Los Angeles. Both live in entirely different musical environment. We know Mari from her outstanding Beethoven sonatas (also for Pentatone), whereas Momo specializes in French and Japanese music. Yet, as suggested above, they have found solid common ground to create here a unified musical picture.

According to the outer sleeve, the three Tchaikovsky’s suites were arranged for piano duo by Arensky (Nutcracker); Rachmaninov (Sleeping Beauty) and Debussy (Swan Lake), at least that is how it looks like. At the back side one discovers that there is another, lesser known or, one might say, hardly known composer, Eduard Langer, responsible for the arrangement of the Swan Lake and that Debussy only did three pieces from Act III. In fact, Langer wasn’t a composer at all. He was a Russian pianist of renown and teacher in Moscow, who was a prolific Tchaikovsky arranger for his own instrument.

A basic problem with piano transcriptions is that one cannot transcribe all the orchestral parts into 4 hands. It is more an arrangement trying to keeping the intrinsic musical values intact. I find it hard to say which of the composers has done the better job, but hard pressed I would probably go for Arensky. I do realize though that it is also a matter of which Ballet you like best. But whatever the case, the finest job clearly comes from the twenty fingers of the two interpreters.

Now that her husband, Kent Nagano, has taken on Simone Young’s position at the helm of the Hamburg Philharmoniker, Mari Kodama certainly has more reason and opportunity to fly to Europe and join her sister for concerts. And so, as they claim, this disk is the result of them having played Arensky’s Tchaikovsky transcription so successfully in concert that a recording had become self-evident. Listening tests prove them right.

Before going into that perhaps some remarks as to what has been recorded. Rachmaninov (Sleeping Beauty) has followed the pattern of the Orchestral Suite Op. 66a. Arensky (Nutcracker Op. 71a) did not, or not completely. (I haven’t compared with the score, but I must assume that what we get here is what he arranged). He did all the 8 movements plus an additional ‘Pas de Deux’, taken from Act II No 14, but changed the order, putting the Russian Dance (Trepak) after the Chinese Dance (Le Thé). The Swan Lake Suite Op. 20a is more of a mixture. The orchestral suite as published after Tchaikovsky's death (version A) comprises 6 movements, just like the total here, but only three of Langer’s transcription are played: movements 1, 3 and 4. The other three were, as said before, taken by Debussy from Act III (Nos 16, 18 and 19).

While fully understanding why they were made and gained popularity in the days when not everyone had an orchestra at its disposal, I’m not a great fan of piano transcriptions or ditto arrangements, because I’d rather listen to the original. But the readings of M&M Kodama are of particular interest in that they do not merely play the notes as dished up by the arrangers. Using the symphonic scores to understand and subsequently extract the transcriptions from their original context, they add another dimension. A dimension of fairytale through suggestive, but elegant and refined playing, with a judiciously coloured palette of make believe, with even some interspersed ‘mystique’ elements, making these wonderfully ‘transduced’ performances, which many are at best familiar with in their orchestral versions, so intimately and irresistibly enjoyable.

I have a great respect for what Mari does, but had never heard Momo before. Judging by the result she is of equal stature. And the flow of both sisters’ playing demonstrates such a convincing degree of togetherness that it is impossible to hear who is in the lead, notwithstanding the excellent multi-channel registration.

This time the recording has not been done in the auditorium of the Concertboerderij ‘onder de Linden’, (late Rian de Waal’s musical farmstead) at Valthermond, The Netherlands, like Mari Kodama’s Beethoven cycle, but in Studio 5 of the Dutch Radio in Hilversum, The Netherlands. It doesn’t affect the quality though. Both grands sound warm and Grand.

I have enjoyed this disc very much. The Kodama sisters provide accounts of the three suites, arranged by quite different composers, that are appropriately light hearted and lyrical or intense and dramatic, and are very well recorded. But frankly this somewhat pales in comparison to Stewart Goodyear's account of his own arrangement of the complete Nutcracker on Steinway and Sons 30040, an sacd that is not listed on this site. That recording is positively scintillating in every respect: arrangement, performance, and sound (24/192). It's so good you'll hear details you've never heard when listening to the full orchestral version. Happy New Year, one and all.