Vaughan Williams: Fantasia on a Theme by Thomas Tallis - Simovic 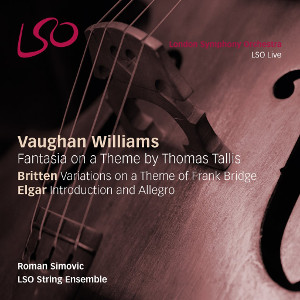 Vaughan Williams: Fantasia on a Theme by Thomas Tallis
Britten: Variations on a Theme of Frank Bridge
Elgar: Introduction and Allegro


Following two well-received releases, the LSO String Ensemble continues on LSO Live with three English masterpieces: Vaughan Williams Fantasia on a Theme by Thomas Tallis, a visionary fusion of folksong and sacred music; Britten Variations on a Theme of Frank Bridge, a challenging landmark of 20th-century string writing; and Elgar's Introduction and Allegro, an incredibly well-loved work with a special significance for the LSO, having been composed for and premiered by the Orchestra.

The popular masterpieces for string orchestra on this LSO Live release from three of the greatest English composers make a most attractive coupling especially when performed as brilliantly as here by the LSO String Ensemble. The LSO has an enviable reputation as arguably the finest orchestra in the UK, and while each section of it is graced by players at the top of their profession, it is the unrivalled musicianship, technical assurance and flexibility of the strings that bring a special esprit to performances by this orchestra.

This is the third release of this ensemble to appear on the LSO Live label. Music by Tchaikovsky and Bartok was featured on the first, Tchaikovsky: String Serenade / Bartok: Divertimento - Simovic while the second was devoted to transcriptions of quartets by Schubert and Shostakovich Schubert: Death & the Maiden, Shostakovich: Chamber Symphony - LSO String Ensemble. Both of these earlier issues demonstrated the impeccable discipline and sensitivity of the players as well as their interpretive ability in differing musical styles. As before they are directed here by their leader the charismatic Roman Simovic.

A marvellously bracing and muscular performance of Elgar's wonderful Introduction and Allegro opens the programme with the twenty six players of the ensemble revelling in Elgar's inspired writing and making light of its formidable challenges. Vaughan Williams' reflective Fantasia on a Theme by Thomas Tallis that follows makes an effective contrast with the boisterousness of the Elgar. Though the immediacy of the recording does not provide quite the sense of perspective in the exchanges between Orchestra I and II found on some versions the contributions of the solo quartet (Roman Simovic and Thomas Norris violins, Edward Vanderspar viola and Tim Hugh cello) are ravishing.

Both the Elgar and Vaughan Williams works have a direct connection with the London Symphony Orchestra as their premieres, that took place over a century ago, were given by the fledgling body conducted then by their respective composers who, one can say with some certainty, would have been astonished by the remarkable standard of execution heard on this disc.

Britten's Variations on a Theme of Frank Bridge quickly became a classic of the genre almost immediately after its premiere at the Salzburg Festival in August 1937 and has received innumerable recordings since then. Here the account by Roman Simovic and the LSO String Ensemble need fear no comparison with the composer's own incomparable recording of the work that he made with the English Chamber Orchestra in 1970. Simovic's tempi are a mite faster than those adopted by Britten and only in the Fugue and Finale did I feel Britten's broader tempo brought greater expressive depth to the music.

These performances were recorded live in DSD 128fs on 3rd February 2016, and the Classic Sound engineers, Neil Hutchinson and Jonathan Stokes, have excelled themselves in all three works. Listening to this 5.1 multi-channel SACD I found it hard to believe that the warm and atmospheric sounds that emerged from my speakers came from recordings made in the usually unsympathetic Barbican acoustic.

Highly recommended even to those who already possess multiple recordings of these evergreen compositions.

SSR has not taken over the reigns just yet but it is good to see LSO live still plugging away to bring us key recordings of some of the better live concerts held in the City of London in the meantime. Roman Simovic is the LSO Leader and an accomplished soloist in his own right. The LSO strings are by far their best section and if past performances are anything to go by this should be a cracker.

We are attending a concert soon by returning maestro Valery Gergiev conducting Prokofiev's Sixth Symphony and it will be interesting to see if LSO Live bother to record it. I hope they do, not because there is a dearth of recordings of this familiar work but simply to compare the LSO and The Mariinsky Theatre Orchestra under Gergiev's baton. 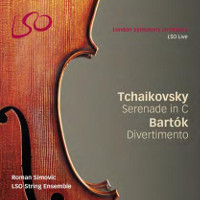 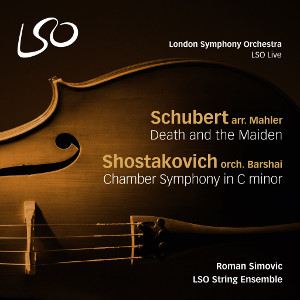