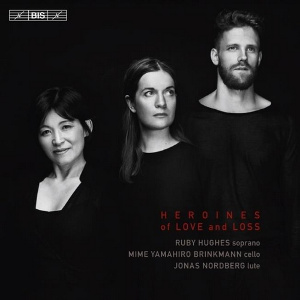 
The women appearing before our ears throughout this programme range from the Virgin Mary and Dido, queen of Carthage, to Shakespeare’s Desdemona and the unfortunate Anne Boleyn, waiting for her execution in the Tower of London in 1536. But the disc also features four other heroines–the Italian composers Claudia Sessa, Francesca Caccini, Lucrezia Vizzana and Barbara Strozzi. All active between 1590 –1675, they will have required great courage to rise above the social conventions of the time, but this surprisingly productive period for female composers also offered an opportunity that would disappear in later centuries: the all-female environment provided by the convent. More than half of the women who published music before 1700 were nuns, including Sessa and Vizzana, who are here represented by brief meditations on the suffering and death of Christ.

Caccini and Strozzi, on the other hand, lived very much in the secular world – Caccini at the Florentine court and Strozzi as a free-lance musician and composer in Venice. Unhindered by the restrictions imposed by the church on sacred music they both adhered to the new stile moderno championed by Claudio Monteverdi. Celebrated for their singing, they composed vocal music which makes ‘the words the mistress of the harmony and not the servant’, to quote Monteverdi’s brother Giulio Cesare. The soprano Ruby Hughes has already made her name for herself in a wide-ranging repertoire, but has a special love for the constellation of lute, cello and voice. With Jonas Nordberg and and Mime Yamahiro Brinkmann– who also contribute instrumental solos –she here revels in the dramatic and expressive potential offered by this trio combination, and by the music by these female composers and their English colleagues Henry Purcell and John Bennet.

Somewhat over a year ago I reviewed Jonas Nordberg’s first Super Audio disc for the Spanish label Eudora Records and was thrilled about his delicate command of the Lute family. So I’m very pleased to review his second time around in the Hi-res domain, now for BIS, with an equally intellectual and well-chosen programme ‘Heroines of Love and Loss’, in which he is joined by the cello of Mime Yamahiro Brinkmann and the soprano of Ruby Hughes, one of the most crystal clear voices I’ve heard in a long time.

The recital opens with Toccata Arpeggiata, written in 1604 for chitarrone/theorbo by Giovanni Kapsberger, a lutist and theorbo player of Austrian descent (Johann Hieronymus), who lived most of his live in Italy; in those days a ‘Mecca’ for lute players. I’m not sure about its relation to heroines, love or loss, but it does set an attractive tone for a splendid disc, as it gloriously opens the door to Ruby Hughes’ beautifully sung ‘Oh! Lead Me To Some Peaceful Gloom’. Henry Purcell’s contribution to a place ‘Where none but sighing lovers come’.

I had not heard Ruby Hughes before, but I was immediately struck by her crystalline and pure voice. Her tonal precision is most remarkable and she commands without any vocal limitation a wide tonal spectrum with an enticingly open voice. In other words, a voice to dream away with.

In a personal foreword she explains how in the 16th and 17th century the themes of love and loss “were often at the heart of the composers’ message” and that we “were astonished to discover an abundance of possibilities within the dynamics of the trio”. She furthermore refers to the fact that some of the scores “were often not fully realized” leaving ample room for “improvisation and spontaneity”.

In the list of composers we find a number of female ones. Like for instance nun Claudia Sessa, Francesca Caccini, Barbara Strozzi, also called Barbara Valle (a love child from the Venetian poet Giulio Strozzi and his maid servant, Isabelle Garzone), all three not quite house hold names, but in their days popular on the Italian vocal scene and, as we can acertain by listening to the pieces on this disc, writers of intimate and attractive music.

Of the remainder I particularly liked John Bennet’s ‘Weep, oh mine eyes’, which Ruby sings, upon first hearing, as though a mother is sitting next to the cradle, putting her child to sleep. However, the text (all texts are included in the liner notes) tells a quite different story; a tale of mournful Venus birds singing ‘lullaby to my unrest’ and ‘love live loyal or I die’. Whatever the character of the lullaby, Ms. Hughes’ recite is one of deeply, yet positively felt emotion.

And there is more to enjoy. Included in the programme are all four (dispersed) movements of Vivaldi’s cello sonata in G minor, allowing for the third player, the Japanese cellist, Mime Brinkmann, to excel. She clearly carries on the baroque tradition of Royal Conservatory in The Hague, The Netherlands, like such eminent baroque cellists as Anner Bylsma and her fellow country man, Hidemi Suzuki have been doing. Baroque obliging, she uses no, or hardly any vibrato, and yet her pitch remains spot-on. Her bowing is supple and the sound she draws from her instrument is definitely ear-pleasing.

As a trio, the three share responsibility for taking the lead, though Nordberg provides the cement throughout in a smooth and faultlessly articulate fashion. Drawing the recital to a close with a final song of an unknown source (Anonymous): ‘O Death, Rock Me Asleep’, a song of resignation, but at the same time a song of fulfillment: A life lived, longing for eternal peace, a befitting end to a wonderful disc and a wonderful combination of sing & string & plucked sound, a disc that takes the listener on a trip of delightful discovery, which I, for one, would not have wished to miss.

The recording is impeccable, giving each of the artists their proper due, with carefully handled surround, creating intimate ambiance and discrete depth of the overall soundstage.