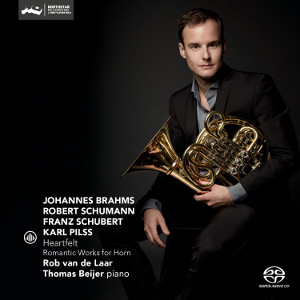 
Rob van de Laar, 29 years old, is the Principal Horn of the Mozarteum Salzburg. As a soloist first disc, he chose the great music of the German Romanticism for Horn. Brahms’ Trio was composed in 1865, during a peaceful summer at Clara Schumann’s house in the Black Forest.

The Adagio and Allegro by Schumann was composed in 1849 and is one of a series of miniatures for different solo instruments and piano written by Schumann in Dresden in 1849. Schumann was among the first to explore the expanded possibilities offered by the new valve horn.

Schubert wrote his song Auf dem Strom in 1828, the final year of his short life, to a text by Ludwig Rellstab (1799-1860). It was written for a concert at the Vienna Musikverein, marking the first anniversary of the death of Ludwig van Beethoven on 26 March. Schubert, who was a great admirer of Beethoven, saw his opportunity to compose a special song as an ode to the master. He added a dazzling horn part here.

The composer Karl Pilss (1902-1979) is perhaps best known among brass players, having written concertos for trumpet, horn and bass trombone, as well as a number of works for brass ensemble. The influences of Richard Strauss, Gustav Mahler and his composition teacher Franz Schmidt can be clearly heard in his music.

Last Wednesday, the 4th of January, the Dutch Horn player, Rob van de Laar, received the coveted Dutch Music Price 2017. This is, indeed, the most sought after reward for any young and coming Dutch musician. Among previous winners are Janine Jansen, Quirine Viersen and Pieter Wispelwey. It was, therefore, with much anticipation that I slid his debut SACD in my new Oppo. And it may sound a bit pretentious, but I could not agree more with the choice of the Dutch selection committee, especially in view of the boost this gives to a new talent.

For this first recording some obvious works were chosen: Brahms’ Horn Trio, Schumann’s Opus 70 for Horn and Piano, and perhaps to a lesser extent, Schubert’s beatifully moving ‘Auf dem Strom’ (On the River); completing this programme with the ‘Tre pezzi in forma di Sonate’ from the to many melomanes little known Austrian composer, Karl Pilss.

From things I’ve read about him, van de Laar, is a most ambitious as well as a very meticulous and perfectionist personality, taking music as seriously as his career. At first happy to be offered a tutti position in the ‘The Hague Residence Orchestra’, while still studying at the Royal Conservatory in The Hague, Holland, he soon felt the urge to move on, realizing that the solo position would not become vacant in the foreseeable future. In combination with his undeniable talents these are, in my view, the perfect ingredients for a bright future. Because talent alone is not enough. Playing any instrument well means work, hard work; and the proper and healthy kind of ambition is its motor, or inspiration, if you like.

Comparing his Brahms and Schumann with the Czech Horn player, Baborak, on the Japanese label Cryston Horn Trios - Baborak, Nasturica, Shimizu, the biggest difference to van de Laar’s advantage, is not only the recorded quality, with more depth and detail, but also, in terms of instrument handling, the balance between the three players. I have, therefore, a personal yet clear preference for van de Laar & Co. showing, too, more youthful élan throughout.

“Take the final farewell kiss,
“And the waving and greetings
“I still send to the bank
“Before you turn away on me!”

Karin Strobos convincingly bids - though I would have wished her to be slightly more lyrical - ‘farewell to a beloved person’, carrying life, in a dramatically coloured setting by van de Laar’s sensitive Horn and subtle piano accompaniment from Thomas Beijer, to an irreversible end.

I think it’s a pity that the full (German) text is not provided in the otherwise extensive liner notes, thereby fully understanding that there is only so much room in a booklet to make it fit in a jewel box.

Not really being a brass orchestra devotee (apparently his works for solo trumpet are standard fare for trumpet players), Pilss’s Sonata in Three Pieces was new to me. Although composed somewhere in the mid-20th century, it is romantic as romantic can be. Had I not seen the text on the disk cover, I would have guessed it to be a newly discovered Sonata for French Horn and piano by Richard Strauss. Van de Laar’s reading is in the best tradition of such a late romantic work.

Of course, the prime focus lies with Rob van de Laar, but the co-artists form nonetheless an integral part of the overall success. Thomas Beijer (piano), Mathieu van Bellen (violin) belong to the vast reservoir of young and talented Dutch artists, anxious to follow in the footsteps of their idols.

In this context I would also like to offer some further thoughts on Karin Strobos’ singing. 'Dramatic' or 'lyrical' can be a matter of personal choice. In actual fact, Strobos is an amazingly flexible singer and I have no doubt that she can do both and even more …. Classical singers are usually bad jazz performers, requiring a totally different approach. Few are able to do it. Karin Strobos is one of the happy few, and a pretty good one at that, like singing ‘Feeling Good’ (Nina Simone) at a public performance in Amsterdam, The Netherlands (2012, 5th of May Concert) as though she’s never done anything else.

An altogether promising debut by a van de Laar, still on the way up, and greatly helped by his colleague musicians and, need it still be said, an exemplary recording by North Star Recording Services in the famous facility of the Galaxy Studio in Mol, Belgium..