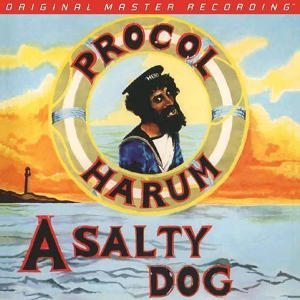 
Procol Harum stood apart for its aptitude to blend classical figures with rock motifs without coming across as self-indulgent or contrived. Graced with commanding mood pieces, the group's 1969 album – appointed with evocative artwork that pays homage to the Player's Navy Cut logo – exhibits the band's distinctive talents and genre-jumping breadth with an idyllic fusion of performance, composition, and sound.

The British rock band Procol Harum in its early personnel lineup created three extraordinary studio albums from 1967 to 1969, a brief period of time in which sonic experimentation—paradoxically—flourished under the conservative reign of a hidebound recording industry, and musical styles progressed at an unprecedented rate of change.

Procol's albums are not often accorded the classic status of their contemporaries. Pianist-singer-composer Gary Brooker's song forms were unconventional, and his collaborator Keith Reid's lyrics were richly allusive and emotionally stark. Procol's sound was immediately recognizable for Brooker's powerful R'n'B tenor voice and jazzy piano, Robin Trower's sinuous guitar lines, Matthew Fisher's classical-laced Hammond organ parts and drummer B.J. Wilson's intricate accompaniment and front stage position in the ensemble. Yet their singles languished in the charts, and their reception in the UK was too little, too late for the band to survive the changes in pop music aesthetics that occurred when punk and New Wave emerged in the late 1970s.

Procol Harum's third album, "A Salty Dog", was recorded in January and February 1969 at EMI Abbey Road Studios on new, state-of-the-art eight-track recording facilities. Procol's organist Matthew Fisher produced the album; Ron Richards co-produced the three songs Fisher wrote and arranged. Ken Scott, who had recently recorded The Beatles' "White Album", engineered the sessions. The title track was released as a single in June to critical acclaim from the UK music press, but lagged in sales, its length and complexity an obstacle to airplay. Undeterred, the band sojourned in the US, where they had already acquired an enthusiastic fan base.

"A Salty Dog" received wide airplay in the US in the summer of 1969—when it struck me like a musical thunderbolt. The orchestral arrangements, emotive vocals and allusive lyrics shattered my preconceptions and opened my ears. Friends and I faithfully attended Procol Harum shows, avidly collected UK Regal Zonophone and US A&M LPs, promo pressings and rare singles, watched rehearsals of the Hollywood Bowl concert with the Los Angeles Philharmonic, and finally got to meet the musicians backstage in 1977 after a concert on their final tour before long hiatus. Hearing Gary Brooker critically assess the band's performance, and Keith Reid explain that organist Chris Copping's battle with alcohol had led to his departure; shaking hands with the great drummer B.J Wilson and feeling the fatigue in his cramped fingers; forty years on, memories of that evening remain vivid.

Mobile Fidelity's excellent SACD transfer of "A Salty Dog" makes vivid to old fans and new listeners the artistry of these creative musicians who struggled to produce album-length works in a record business that favored 45 RPM singles, and who labored past the marketing gauntlet of BBC radio personalities and a fickle UK pop music press to reach their audience.

A comparison of the SACD to the 2009 CD remaster on the UK Salvo label reveals significant sonic differences. Salvo's mastering, by engineer Nick Robbins, emphasizes low bass and upper-mid frequencies to produce slam and heightened presence. It may sound more 'forward' than the SACD, especially on consumer-quality equipment such as compact self-powered loudspeakers, headphones and earbuds. The CD contains several bonus tracks and was an even better digital transfer of the album than the preceding issue on the Westside label.

The new SACD transfer mastered by engineer Rob LoVerde very closely replicates the analogue original source (my reference is a UK Regal Zonophone LP). MoFi's SACD brings out the sonic details in the orchestral arrangements of "A Salty Dog", "Wreck of the Hesperus" and "Pilgrim's Progress". In the third verse of "A Salty Dog" ("We fired the gun and burnt the mast") the viola and cello that play counter lines to the vocal melody are set forward from the rest of the ensemble. The orchestra and Brooker's piano blend into the soundstage enhanced, I suspect, by EMI's plate reverb.

The use of atmospheric effects in the densely-arranged songs makes the more straightforward tracks sound all the more immediate. Brooker's vocals on "The Milk of Human Kindness" and the timbre of B.J. Wilson's drums are rendered in lifelike detail. "The Devil Came from Kansas" takes a complex approach that explores the magic of studio technique. Brooker's lead vocal is run through tape delay, doubled and split wide left and right, while Robin Trower's "wicked" tremolo guitar darts between the speakers. If you want to hear how hard Procol could rock, turn this one up. On "Boredom", Ken Scott's suggestion that the band play marimba and hand percussion instruments results in a retro 'demonstration quality' track to play at parties, especially after your guests have had a few.

Two songs on the album deserve special attention for their skillful artisanship and inseparable weave of songwriting and lyrics. "Too Much Between Us", Reid's depiction of loneliness in the midst of a failing relationship, employs an ABC form with a descending chord progression in the C section that makes the resolution to the tonic minor feel almost circular, like an unhappy memory experienced endlessly. The arrangement highlights acoustic guitar and organ, with the poignant, delicate sound of the celeste doubling the guitar.

"All This and More" is one of Gary Brooker's finest songs—it drew George Harrison's approval and led to Brooker's involvement in the recording of Harrison's "All Things Must Past". Brooker's use of diminished sevenths and minor chords in an ascending series builds emotional momentum on the lyric "In darkness through my being here, away from you" to a crisis that Reid's rhyming line dispels: "The bright light of your star confronts me, shining through". This is songwriting artistry of a high order. The music and lyrics serve each other in equal measure.

Robin Trower's ambitions as a bandleader eventually necessitated his departure from the band, after the recording and tour for Procol's fifth studio album "Broken Barricades". On "A Salty Dog" he doesn't deploy the Hendrix-styled solos that would become his stock in trade a few years later, but his tone and tremolo are impossible to duplicate—as any guitarist who has tried to copy him knows well. Trower's featured song "Crucifiction Lane", which he wrote to Keith Reid's lyrics, sails against the prevailing tide of late '60s British blues-rock. The minor-key chord progression follows Brooker's jazz-influenced template rather than conventional 12-bar form. There is a dark intensity to the performance that still feels unsettling. The outlier on the album, the guitar and vocal duet "Juicy John Pink", was recorded in an empty rehearsal room by Ian Stewart, the 'sixth Rolling Stone'. It's a measure of Procol's integrity that they served this raw track at the beginning of the LP Side 2, in sharp contrast to all the lushly orchestrated tunes.

Keith Reid has stated that "A Salty Dog" is not an album about the sea. But his use of the sea motif was certainly intentional: a metaphor for the currents on which we drift in and out of relationships, the stormy waves that drive us onto the rocks of despair or lift us up to the crest of redemption. Reid's vision found a unique outlet in the songs of Gary Brooker. His presence on the road during Procol Harum's concert tours kept him in contact with the experience of those travelling, uprooted musicians whose lot he elected to share.

Procol Harum was always more than "A Whiter Shade of Pale". Though the popular success of that early single overshadowed the musically varied albums they subsequently recorded, it was the band's hard-earned reputation for compelling live performances and their commitment to artistic reevaluation that gained them a following of long-time fans and a singular place in the history of rock music.

The Mobile Fidelity SACD of "A Salty Dog" won't receive the attention given to the new remix of The Beatles: Sgt. Pepper's Lonely Hearts Club Band, but for Procol aficionados and younger listeners who may be curious about the release of this overlooked masterpiece, the issuance of the album in authentic sound is a welcome addition to the SACD catalog of classic rock music.

"A Salty Dog" was a milestone artistic accomplishment by Procol Harum, a setting of seafaring-metaphor lyrics to barrelhouse piano and classical-inspired string arrangements, prodded by Robin Trower's blues guitar riffs and propelled by BJ Wilson's orchestral drumming. This revelatory new transfer from the original master by Rob LoVerde unveils details that were never so clearly audible. It's well deserving of an SACD release (and a full review, forthcoming).

Brooker's soaring vocal in the final chorus of the title track ("How many moons and many Junes / have passed since we made land?") still sends shivers down my spine, even after all these many Junes.

Now that I've heard it, I must agree totally with the reviewer. The remastering is indeed revelatory, and confirms my long held opinion that the title song is the best track Procol Harum ever made, even if others are more known.
As I remember it, this was the fourth LP I bought as a teenager; after Help, the White Double (both by Beatles) and an early Boulez recording of Stravinsky's Rite of Spring.