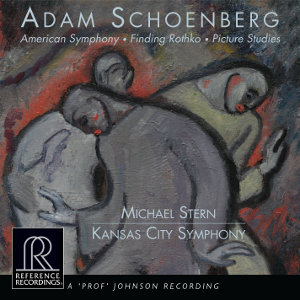 
Schoenberg says: "I have dreamt of having an orchestral disc of my music since first becoming a composer. This is an extraordinary gift, and I am thrilled to be sharing my music with all of you. The three pieces that you will soon experience embody my growth from student to professional composer. They each explore different styles, but my artistic voice remains consistent throughout." Recently named one of the Top 10 most performed living classical composers by orchestras in the United States, Adam Schoenberg's music is 'invigorating' (Los Angeles Times), and full of 'mystery and sensuality' (The New York Times). This most recent season included performances and premieres at the Library of Congress, Kennedy Center, New York Philharmonic, The Cleveland Orchestra, Dallas Symphony Orchestra, and Hollywood Bowl."

We are proud to present these new works, 2 of them commissioned by the Kansas City Symphony (American Symphony and Picture Studies). The collaboration between Schoenberg and Michael Stern is extraordinary. Schoenberg states: "He is the first conductor to champion my music. He understands it, embraces it, and gives it an emotional dimension that would otherwise not exist. I also must thank the musicians of the Kansas City Symphony. The Kansas City Symphony is the region's only full-time professional symphony orchestra. Led by Music Director Michael Stern since 2005, the Symphony has experienced impressive artistic growth, garnering national and international acclaim. The orchestra's 80 full-time musicians are area residents, and each season they reach more than a million people through their concerts, educational programs and community outreach performances. They also serve as the orchestra for the Lyric Opera and the Kansas City Ballet.

This thoroughly enjoyable new release from the audiophile Reference Recordings label features three orchestral works by the young Los Angeles based composer Adam Schoenberg (born 1980). Together they chart a period of his compositional development from the first piece entitled 'Finding Rothko' (2006), written while he was still a student studying with John Corigliano, to his 'American Symphony' of (2011) and finally his latest orchestral work 'Picture Studies' (2012).

In the detailed and informative liner notes typical of Reference Recordings releases, Schoenberg writes: “My music comes straight from the heart – striving to be beautiful and inspiring, and simultaneously challenging and rewarding”. Few would argue on the basis of the music recorded here that he is achieving these aims with compositions that are light years away from the dodecaphonic creations of his illustrious Viennese predecessor Arnold Schoenberg – no relation by the way.

Schoenberg's music is tonal, beguilingly atmospheric and engagingly melodic, but in spite of the fecundity of its invention it does often pay homage to the music of many American composers of the past including Leonard Bernstein, Roy Harris, Samuel Barber, and most notably Aaron Copland. Visual stimuli were an essential element in the creation of two of the works on this disc while pride in the American psyche played its part in the creation of the third.

'Finding Rothko' was inspired by four works by the abstract expressionist painter each housed in a different museum in the United States. Its four short movements played without a pause but linked by a short theme that the composer dubbed the 'Rothko's theme' are 'Orange', 'Yellow', 'Red' and 'Wine', these being the dominant colour in each of the Rothko paintings. The two outer movements are contemplative and majestic, their haunting beauty fully realised by the luminous playing of the Kansas City Symphony strings. The two inner movements are both energetic – 'Yellow' starting slowly and gradually building to huge climax with whooping horns and percussion worthy of Respighi at his most uninhibited, and 'Red ' violent and percussive. It is no surprise that this imaginative 15-minute work has become one of the composer's most widely performed pieces.

The titles of the five-movements of the 'American Symphony' – I fanfare, II white on blue, III rondo, IV prayer and V stars, stripes and celebration - clearly indicate the overall optimistic character of the symphony though the reflective 'prayer' “dedicated to those lost in 9/11, Katrina and all victims of violence and war” is especially touching. The election of President Obama in 2008 was the stimulus for the piece and Copland's 3rd Symphony the model. The totally committed performance from Michael Stern and the Kansas City Symphony plus the work's instant accessibility should make it many new friends.

The final work on the disc 'Picture Studies' (2012) is the result of an intriguing joint commission from the Kansas City Symphony and the Nelson-Atkins Museum for a 21st century 'Pictures at an Exhibition'. Rather than make the paintings of one artist the basis for this composition, as is the case with the Mussorgsky/Ravel Pictures, Schoenberg has instead chosen four paintings, three photographs and one sculpture from the museum's collection with which to fashion his ten-movement 'suite'. In the liner notes he gives us a helpful insight into his compositional thought processes following his selection of the chosen artwork. The movements are well contrasted in mood, tempo and length. Picture Studies does certainly test the virtuosity of the Kansas players in movements such as 'Kandinsky , but they rise to the challenge superbly with vibrant playing of great character and finesse.

Adam Schoenberg is extremely fortunate to have been blessed here with a recording that does full justice to his vivid orchestral palette. Thanks to the efforts of the experienced team of “Prof” Keith O Johnson (recording engineer) and David Frost (producer) we are presented with a spacious sonic tapestry of wide dynamic range and tonal verisimilitude that is enhanced by the generous ambience of the Helzberg Hall, Kauffman Center for the Performing Arts in Kansas City.

This intriguing release can be confidently recommended, even to those often suspicious of much contemporary music.

Probably an unfortunate surname for the composer.
Some will look at it and think it is someone else and run a mile.