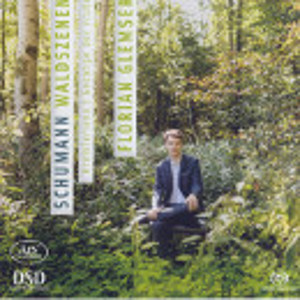 Many around the globe may know the name of Bernd Glemser. He has, indeed, successfully participated in numerous competitions, becoming a pianist whose recording of Rachmaninov’s second piano concerto obtained world fame in the film Spider Man 3! In 1989, while still studying at the Saarbrucken Music Academy, he was appointed the youngest music professor ever in Germany. A ‘wunderkind’? So it would seem to me.

And who is Florian? Yes, his son. Question then is, have the musical genes sufficiently passed and inspired Glemser junior? Born into a family of musicians is an asset; especially if your father is a music teacher. Technical skills can be learned, but feeling for and interpretation of musical content requires something else, something more; something that cannot easily be explained. It made me curious to find out how Florian Glemser would live up to it.

Following my usual format I selected recordings matching the works on this disk for reasons of comparison. And what happened? I started Florian and completely forgot to compare as I went through the programme. What I heard was so very much Schumann, that I did not feel the urge nor the necessity to interrupt the flow. Only some time afterwards, and basically for ‘acquit de conscience’, did I put in the comparison disks. The result? None of the other pianists was evidently better. I might as well stop here, because what more can I say?

Of course, I could highlight the obvious length Florian has gone through to get under Schumann’s skin, to open up his mind to understand the mind of a melodiously gifted but mentally often tormented composer; to seek to liaise between Schumann’s affection for literature and how that has crept into his creational activity. All these elements have manifestly been translated into the way young Glemser plays Schumann. He has put himself firmly on the map as a Schumann interpreter.

I can’t think of a more promising start!