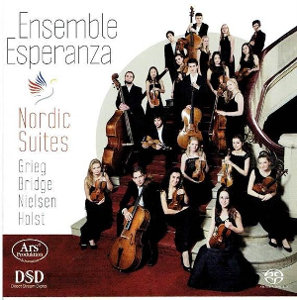 ‘Geist und Spiel’ melt into musical completeness and unspoiled ‘élan’ of which only youth seem to hold the secret.

Some twenty youngsters, making up the strings of the recently established ‘Ensemble Esperanza’ (winter 2015), instantly captivate the listener with their fresh and bedazzling musicianship, thereby skillfully blending virtuosity and emotion into a varied programme of Grieg, Bridge, Nielsen and Holst under the title ‘Nordic Suites’.

The musicians of this ensemble are highly talented ‘soloists’ from conservatories all over Europe, holding a scholarship with the ‘International Music Academy Liechtenstein’, which allow them to prepare, through several musical projects in Europe, for an international career. Early last year their first public performance took place at the ‘Next Generation Festival’ in Bad Ragaz, Switzerland, to great international acclaim.

For those unfamiliar with the Liechtenstein academy I quote the following from the John F. Kennedy Centre for the Performing Arts, Washington, DC : “The guiding theme of the International Music Academy in the Principality of Liechtenstein is to support highly talented young musicians between 10 and 25 years of age. More specifically, its internationally renowned teachers/artists annually provide them with up to five periods of intensive one-on-one instruction of one week each per instrument. Thereby, the students are comprehensively prepared for admission to one of the best conservatories worldwide and for the beginning of a rewarding career”.

One of the Liechtenstein teachers is the in The Netherlands highly regarded Mrs. Coosje Wijzenbeek. She is a much sought-after pedagogue at the Sweelinck Academy in Amsterdam as well as the Royal Conservatory in The Hague, where she runs a class of around 30 talented pupils from three years of age onwards. Her strength lies not only in teaching technical skills, however important that is, but also and more specifically to instill sufficient musical baggage; the musical insight that marks the difference between a mere prodigy and a complete musician. Amongst the pupils she delivered are such names as Janine Jansen and Rosanne Philippens. I’m sure it won’t surprise anyone that under such care the violins of the Ensemble literally shine like rising stars and that technical skills are firmly underpinned with refined musical feeling.

Grieg’s suite Op. 40 ‘in the olden style’ from Holberg is high on the list ‘for the millions’ and has, as such, become some sort of classical ‘hit’ rendering dubious service to this beautiful and inventive composition. In the cultivated hands of the Ensemble Esperanza ‘routine’ does not enter the score. The prelude is played with such irresistible freshness that any remaining doubts about the music and the competence of these young musicians quickly evaporate into a totally convincing ‘Yes!’ (as the expression goes in these modern times). And should that not been enough, under their skillful fingers the following Sarabande sweeps away any notion some might have had about the lack of emotion of Northern Composers. Indeed, all it needs are true artists to bring it to the surface.

Frank Bridge is outside England probably one of the least perceived British composers. From a global perspective little is recorded and most melomanes do not even know that it was him, who inspired Benjamin Britten, one of Bridge’s private pupils, to become the composer he was. It is heartening that of late his compositions are gaining in popularity, mainly those in the field of chamber music. Since his orchestral output is limited, we must be grateful for the Ensemble Esperanza bringing his Suite for String Orchestra H.93 for the first time in the Hi-Res catalogue. As for the type of music: this suite is what is usually called ‘an early 20th century late romantic piece’, and it will not fail to please the ear. Certainly bearing in mind the intensely committed fashion these up and coming musicians presented it last October to a clearly impressed audience at a concert in the Angelika-Kauffmann-Saal in Schwarzenberg, Austria, where two days later this recording was made.

Nielsen’s opus 1 is an extraordinary piece from a young, 22 year old Danish composer, trying to find his way in a crowded compositional world dominated by Grieg in the North and the likes of Brahms and Wagner in the Centre of musical Europe. It is written in a style of Scandinavian Romanticism, reminiscent of Grieg and Svendsen, although typical elements of personal characteristics are already noticeable. The premiere of this, according to the concert notes: “Little Suite by Mr. Carl Nielsen, whom nobody knows", proved to be a great success, and it still is a prime choice amongst many of today’s string formations. The Ensemble’s performance finds a perfect balance between sensitive cautiousness and a rhythmically spirited reading, with an attractively coloured musical palette.

In the ever so popular and rewarding Gustav Holst’s St. Paul’s Suite Op. 29, No 2, the orchestra’s Concertmaster, Chouchane Siranossian, of French-Armenian descent, takes the solo part with glowing brilliancy. Taking into account that this is a composition Holst wrote for ‘his’ pupils at the St. Paul’s Girls School (until this very day still a ‘girls only’ school in London, England), the ‘Jig’ (first movement) is ‘so very British’ that one almost forgets that Holst’s roots stem from The Baltics. The Ensemble strike here the right cords and I find it a most befitting end to a disk putting youth in the lime light.

Having played it several times in a row, my enthusiasm grew bigger at every listening round. The musicians display such a wholeheartedly buoyant engagement that, once they catch you, one cannot escape being infected with their disarming charm.

As I see it, such commitment stems from playing - with the exception of the cellists - standing-up. In doing so the body moves in tune with the instrument and the bow at the rhythm and the intrinsic force of the music, thus letting ‘Geist und Spiel’ melt freely into musical completeness and unspoiled élan of which only youth seem to hold the secret.

A final result always depends on the weakest link in the chain. In this recording there is none. The cherry on the cake comes from the recording team of Manfred Schumacher and Martin Rust. They have done it again: not just complementing but amplifying the quality of play with the quality of recording. Depending on where you sit, you have the choice of having the orchestra just in front or, closer to the surround speakers, being submerged by it. I would have given 6 stars for the lot, play and recording, but we are limited to five.

ARS-Produktion surely are champions for calling our attention to the Next Generation of musical heroes.