Can anyone confirm that this is indeed a physical SACD? There is no logo and Amazon says CD (as usual) but before ordering I'd like to be sure.

In the last few months I've listened to almost all the recent/modern multi-channel recordings of Holst's Planets, and this is the one to get. It's got a great performance, ... 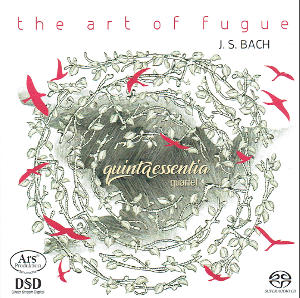 This is special in a number of ways. The most obvious one is: more than 81 minutes of recorded sound against 80 minutes said to be the maximum for the CD layer. However, a more important one pertains to the choice of instruments.

Before going into that, it’s perhaps useful to realize, though scholars do not agree, what ‘The Art of the Fugue’ is about; what was Bach’s purpose? It is illuminating that Bach did not write the variations for a specific instrument. They were written in so called ‘open score’. This was not uncommon in those days, as long as it gives at least an indication like ‘for keyboard’, thus giving a choice between organ and harpsichord. However, in the case of The Art of the Fugue, the question remains open. On purpose? Specialist opinions vary, as they do about many more things regarding Bach’s final composition.

I belong to those who hold the view that Bach’s contrapuncti deal primarily with compositional techniques and may, therefore, best be seen as an intellectual exercise or, in the words of the German musicologist, Christoph Wolff: “an exploration in depth of the contrapuntal possibilities inherent in a single musical subject”. In simple terms: compositional study material. Or (taking into account that these were the final exercise of his life) a legacy of what he (Bach) considered to be the zenith of his compositional skills, left for others to build on; the last one (14, unfinished) but none the less signed: B-A-C-H

Most of us are used to performances with organ, able to cover the highs and the lows, which, according to eminent keyboardists like Gustav Leonhardt, the harpsichord is unable to do. But other instrumental versions exist. For string quartet (Emerson Quartet), or orchestral (Musica Antigua Köln), the latter offering the possibility to bring more variation in the sound perspective. Because, let’s be honest, listening to a complete set of 14 contrapuntal exercises does not make for ‘easy listening’. It’s more food for thought than food for ears. That’s probably why some performers take only ‘capita selecta’ in order not to burden the brain of the listener too much, whilst giving due tribute to what might, indeed, be considered the ultimate achievement in Bach’s oeuvre.

The Quinta Essentia Quartet, made up of four Brazilian musicians, enjoying great popularity at home, propose to be not only as complete as possible, largely based upon the original manuscript (though using as well CPE Bach’s 1751 revised edition), but also to do so with four recorders. And ‘for reasons of sonority’ they opted for historical instruments. The problem, however, was to find (copies of) historical instruments that can encompass the full spectrum from the highest to the lowest note. In the liner notes it is all explained; also that, finally, a Japanese instrument maker offered to convert an existing, modern 440 Hz Yamaha bass-recorder into a 415 Hz ‘historical’ one.

The result, as performed by the Quinta Essentia Quartet, is interesting enough. Being of a same family, the four chosen instruments have the ability to perfectly blend-in with each other, emulating as it were a small chamber organ. From an artistic point of view, their concept works ‘à la merveille’ and in pure musical terms the verdict must be: ‘mission accomplished’. However, impeccably and attractive though their reading of the open score is, I’m less enthusiastic about the recorded sound.

Due to their individual timbre, recording a group of recorders is by no means an easy affair. To avoid frequency interference attaining the best possible restitution is of prime importance. The higher the resolution the better the result. The booklet gives ample information about those responsible for the recording (Engineer and audio editing: José Carlos Pires, with no less than 11 recording assistants listed), but nothing is said about the recording facility nor the format. In the upper region there is some disturbing resonance, whereas, at the lower end, the sonority lacks sufficient warmth.

Will 14 study pieces, played one after the other with small, but increasingly difficult technical changes, appeal to the unexperienced ear of an average audience? I have my doubts. It can convey a sense of monotony in so far as the complexity of consecutive compositional inventions escape a non-initiated listener. I suggest that beginners should not listen to this disc in one go. My advice: take it bits by bits, until the brain begins to understand and is able to follow what, I my view, has never ever been surpassed after Bach left this world. It has served, as Bach had hoped, as an invaluable point of departure for later generations of composers up till this very day.

For a more or less complete set in the high resolution catalogue there is a choice of instruments: organ, strings, saxophones, and now recorders. Personal preferences may play a role and this disc is as good a choice as any other. The concept is interesting and, judging by the quality of playing and enthusiasm with which Gustavo di Francisco, Renata Pareira, Filipe Araujo and Fernanda de Castro, unfold their ideas, not only recorder addicts will surely want to hear more of this inventive ensemble.