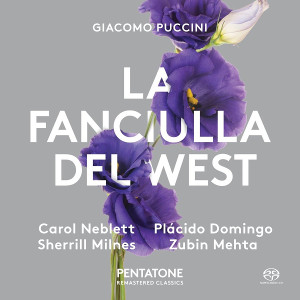 With its potent mixture of stark realism and gushing romanticism, this Wild West melodrama builds on the hard-edged style Puccini had used in Tosca, infusing it with Debussian harmonies and Straussian orchestral colours to produce his most distinctive and original opera. Featuring the stock in trade characters of a gun-toting heroine, a macho hero with a sensitive side, and a villainous Sheriff, Puccini eschews the signature lyricism of his earlier operas for a more seamless melodic style to produce a dramatic work of almost symphonic proportions. While critics of the time were somewhat bewildered by this subversive potboiler, modern audiences have warmed to this richly revealing opera which, unusually for Puccini, has a happy ending.

This classic recording dating from 1977 is Gramophone magazine’s top choice for the opera and can now be enjoyed for the first time in full SA-CD hybrid multi-channel sound.

“Carol Neblett is a strong Minnie, vocally distinctive and well characterised, while Plácido Domingo and Sherrill Milnes make a good pair of suitors …. Zubin Mehta conducts with real sympathy for the idiom” (Gramophone). And the Penguin Guide to Compact Discs and DVDs (2003/4) enthused “Domingo sings heroically … but the crowning glory of a masterly set is the singing of Carol Neblett … Full atmospheric recording to match.”

Although recorded in multi-channel sound, these memorable performances have previously been available only in the conventional two-channel stereo format. Using state of the art technology which avoids the need for re-mixing, our engineers have remastered the original studio tapes to bring the performances to life as originally intended: in compelling and pristine multi-channel sound.

With the notable exception of Wagner, collectors of opera on SACD have not been particularly well served, especially by the major labels, but thanks to PENTATONE's Remastered Classics series some outstanding opera recordings from the 1970s have now appeared in sound quality unimaginable at that time. The quadraphonic tapes have already yielded Puccini's Tosca from 1976 in Colin Davis's very fine account Puccini: Tosca - Davis and now we have what is generally regarded to be the finest version of Puccini's 'La Fanciulla del West' to have appeared on disc for many years.

'La Fanciulla del West' was recorded in Watford town Hall in June 1977 by Deutsche Grammophon engineers following a run of performances at Covent Garden with virtually the same cast (here Sherrill Milnes replaces Silvano Carroli in the role of Jack Rance). This approach has resulted in all the technical benefits of a studio recording, but one that brilliantly retains the atmosphere of a live performance.

So much has been written about this marvellous set over the past 40 years that it seems unnecessary to rehearse all its many virtues. First and foremost is the magnificent conducting of Zubin Mehta - always at his best in Puccini. The generally brisk tempi that he adopts throughout the performance ensure the thrilling forward momentum of the action, yet he is not afraid to relax in the opera's more purple passages, for example, toward the end of the first Act. The superb ROH orchestra respond to his direction with richly passionate playing and sensitivity in equal measure.

Carol Neblett makes a most appealing Minnie in this most taxing role with top notes that are fearlessly attacked, yet she is still able to convey the underlying vulnerability of the character. Sherrill Milnes is as smooth and villainous Jack Rance as one could wish for, while Plácido Domingo in heroic voice gives a memorable account of Dick Johnson (alias the bandit Ramerrez). The many small roles are taken by Covent Garden stalwarts of the period and there are no weak links amongst them. Special praise must be given to Gwynne Howell as Jake Wallace, the roving minstrel, for his noble singing of the moving ballad “Che faranno i vecchi miei là lontano”.

The original recording team took advantage of Puccini's many off-stage effects and these are now at last fully realised in this vivid multi-channel re-issue. Close your eyes and you could be in the Opera House. As on the original 1987 CD release the first SACD (59.20) contains Act1 with Acts 2 & 3 (70.36) occupying the second so there are no disturbing breaks. The presentation, however, is not ideal. The two discs are in cardboard sleeves within a box that also houses liner notes (poorly proofed) that do provide cast details and a brief outline of the opera's plot but no libretto – a major drawback for many listeners.

This is already an essential recording for any Puccini lover, but in this wonderful re-mastering by Polyhymnia International for PENTATONE it has a new found vibrancy and, on both sonic and musical grounds, can be unhesitatingly recommended.

Here it is - the first RQR album this year!

Am really looking forward to this release as it was a favourite on LP.
Wonder when we will hear about other Quad remasters.