Yes this is a wonderful disc, both sonically and performance-wise. Dave Hurwitz of Classics Today regards this performance of the Copland Third Symphony as the best available ... 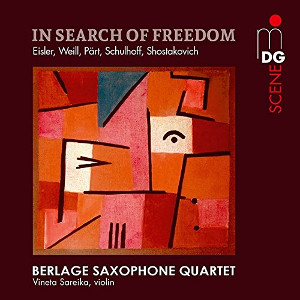 
Freedom Fighters
After the phenomenal success of their Saxofolk debut album, the members of the Berlage Saxophone Quartet now explore entirely different terrain. Five famous composers who found themselves at odds with the political circumstances of their times produced key works of great intensity viewed here from a completely new perspective in these virtuosic arrangements for four saxophones. In Search of Freedom advocates the freedom of art, which manages to survive even in situations of limited personal liberty.

Nazi Prohibitions
For various reasons Hanns Eisler, Kurt Weill, and Erwin Schulhoff fell into disfavor under the National Socialist regime. They sympathized with the Communist Party, some of them were of Jewish background, and they composed “degenerate music” – which in Germany had no future. While Weill and Eisler were very successful as exiles in the United States, the former on Broadway and the latter in Hollywood, Schulhoff got caught between the fronts and died in a concentration camp. Songs from Weill’s Threepenny Opera and Eisler’s Suite No. 6 (from the film music to Le grand jeu) are heard here along with Schulhoff’s Five Pieces for String Quartet, which as a suite of popular dances ranging from the waltz to the tango seems to be quite remote from the political sphere.

Soviet Restrictions
Arvo Pärt earned his place of dishonor on the index of the Soviet authorities when he turned to music of religious and meditative character. Fratres is one of his first pieces of this kind. Vineta Sareike, the first violinist of the Artemis Quartet, plays the violin part, which creates the impression of simplicity but in fact is very demanding. When performed by a saxophone ensemble the harmonic dimension produces an absolutely hypnotic effect – magnificent!

Secret Searcher
Dmitri Shostakovich’s dealings with the Soviet state apparatus were very ambivalent. It continues to be debated whether even his celebratory compositions were not perhaps already intended as caricatures. Whatever the case, his String Quartet No. 8 doubtless numbers among his most gripping works. The Berlage Quartet's negotiation of its abrupt alternations between heartrending lament and ecstatic rhythm make this high-resolution, resounding Super Audio CD an unforgettable experience.

This recording has been on my wish list for months. Presto Classical was running a sale on MDG SACDs... I can scratch one title off the wish list!

7 days from despatch to delivery here in Northern California -- a faster turnaround than from some domestic US vendors. The disc came tightly packed in corrugated cardboard, with no cracks in the super jewel case or broken teeth on the inset. Presto will get my classical music SACD business in the coming year.

Stunning performance of the Shostakovich Quartet No. 8. I probably wouldn't want to hear a Haydn Op. 20 quartet performed on saxophones, but Shostakovich's mordant humor communicates very effectively in the single-reed instrument timbre. The baritone saxophone sounds eerily like a cello in some of the slower passages.